Register / Log In
Guests have limited access.
Join our community today!
You are currently viewing SemiWiki as a guest which gives you limited access to the site. To view blog comments and experience other SemiWiki features you must be a registered member. Registration is fast, simple, and absolutely free so please, join our community today!
ARM, Infineon, Synopsys, SK Hynix talk AMS Simulation
by Daniel Payne on 06-28-2017 at 12:00 pm
View Profile
View Forum Posts 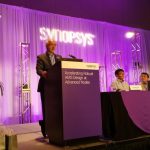 Every SoC that connects to an analog sensor or device requires AMS (Analog Mixed-Signal) circuit simulation for design and verification, so this year at #54DAC the organizers at Synopsys hosted another informative AMS panel session over lunch time on Monday. What makes this kind of panel so refreshing is that the invited speakers… Read More

A couple months ago we heard from another vendor in a webinar on HBM and breaking through the “memory wall”. Next week Open Silicon weighs in on the topic in a webinar with partners SK Hynix and Synopsys.… Read More

SoC designers have hit the memory wall head on. Although most SoCs address a relatively small memory capacity compared with PC and server chips, memory power consumption and bandwidth are struggling to keep up with processing and content expectations. A recent webinar looks at HBM as a possible solution.… Read More

Next week there is a live seminar at the famed Computer Museum in Silicon Valley that you won’t want to miss. If you haven’t been to the Computer Museum here is what you are missing:… Read More