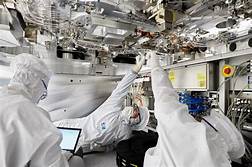 ASML reported great revenues of Euro5.2B and EPS of Euro4.27 per share. Most importantly the order book was Euro6.2B with Euro2.9B of EUV bookings.

It was reported on the call that roughly $300M of DUV sales slipped due to supply chain issues combined with issues with ASML’s new logistics center. Revenue was a slight miss versus street expectations while earnings exceeded expectations.

We had been hearing more and more about strains in the supply chain for semiconductor equipment tools and materials. On Oct 4th we put out a newsletter in which we warned of risk to the semi stocks based on these supply issues;

We specifically mentioned ASML as one of the risks in the supply chain itself. The semiconductor supply chain is by far the most global and most complex and thus the most exposed to disruptions.

We have mentioned many times about the fantastic complexity of ASML tools especially EUV which has taken literally over 30 years of global effort to bring about. The supply chain is very long and far reaching across the globe.

Some components such as the lenses have a very finite supply that is very difficult and time consuming to expand upon.

At one point, back a while ago, one of the limiting factors was not enough young Germans wanted apprentice for many years to learn how to polish the glass used in the lenses. Obviously much of that has been automated but limits still exist due to the highly specialized nature.

ASML stated on the call that they had eaten into their “safety stock” (kind of like strategic reserves) of DUV components and the cupboard was now bare. Basically we have stretched the supply chain to the point where we just can’t easily get anymore out of it. Any flexibility of supply is fading.

This underscores our warning of two weeks ago that the upside from here will be more limited as we asymptotically reach an upper bound of growth in the near term.

What if its not just a near term limit or plateau but a cyclical peak?

The question circles back around to how bad the hangover will be after he current party is over… Do we way overshoot and build so much excess capacity into the industry that prices collapse for years?

Do we slowly slow down into a soft landing where capacity finally catches up with demand that continues to grow at an accelerating pace? Its still too early to tell but investors will be very, very nervous that they have seen the cyclical movie before and it never ends well.

On the plus side, demand and orders for EUV tools as well as production seem somewhat largely unaffected, which is all important as the ASML story is all about EUV. We see no reason to expect any change in EUV demand for the foreseeable future as Moore’s Law demands the shift to EUV.

DUV demand likely exceeded previous plans as in a “normal” semiconductor industry with litho steps moving to a new technology you are usually less inclined to go out and buy more tools of the older technology as the mix is declining.

Obviously the unexpected demand for older semiconductor capacity turned the normal Moore’s Law flow and strategy on its head, hence the bigger than planned demand for DUV tools which ASML wasn’t counting on.

Still a monopoly with great financials

We have to remember not to lose sight of the reality that ASML remains a virtual monopoly in a fast growing industry with technology on its side.
The fundamentals have nor changed at all, just some relatively insignificant timing due primarily than higher than expected growth. Its a very high class problem to have, more growth than you can satisfy.

I am getting tired of two words “supply chain”

The buzz words of the month are clearly “supply chain”. These two words have supplanted many other words in the nightly newscast. Next I am sure that QAnon will take up some wild theory about a supply chain conspiracy to take down the global economy…film at 11.

Yes, indeed, the supply chain has impacted many industries and the catalyst of “supply chain” issues started with Covid but was clearly brewing for a very long time.

There are many supply chains; food, energy, pharmaceuticals, all of which have become overly complex, global and therefore vulnerable.

While its clearly not good to take an isolationist view, like the hermit kingdom, there certainly needs to be an awareness and planning for the exposure

Obviously ASML has gotten whacked as it is no longer a “perfect” story. While other semiconductor equipment makers do not have as complex a supply chain they nonetheless remain exposed to potential disruptions.

ASML’s stock was priced for perfection and we had warned that anything less than perfect performance would cause a sell off and that’s what we have seen.
We would expect similar reactions to any other stock that reports weakness or exposure. We also think the the probability of such an event is increasing as supply chains get stretched further.

Other companies have more diverse product lines that may be able to absorb shortages in one area with strong demand in other areas.

As collateral impact from ASML we would point to semiconductor companies that won’t be able to ramp expansion as quickly as expected. We have gone into detail previously on the risks to companies like Intel and their need for ASML tools.

ASML is the key to Intel’s resurrection

ASML also pointed out that they and other equipment makers need to get semiconductors in order to build more tools to make more semiconductors. Right now these seem more like inconveniences than major problems.

While its less likely that the long term positive trend will be impacted, we think that the stocks, which are always more skittish, will continue to be soft as investors get more nervous and risk averse until we stop hearing “supply chain” in the nightly news.