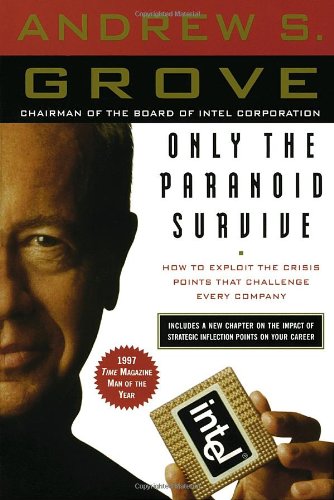 Over the course of the last fifty years there have been two significant books that have delivered emotional and operational clarity on the rise and fall of high tech companies and industries: The Innovator’s Dilemma and Only the Paranoid Survive. Amazingly, these two books were released within a year of each other (1996, 1997) and at the height of Andy Grove’s tenure as CEO of Intel. Still today, the Innovator’s Dilemma is more often used as a short-handed catch phrase to describe the sure apparent fall of an established player in a maturing industry whereas Grove’s phrase is seen as a rallying cry to remain vigilant against competitors forays into ones market. What is most remarkable about Grove’s book is that it really provides a roadmap for companies to avoid the Innovator’s Dilemma trap and would be a timely read today as Intel wrestles with its future.

Finished in 1996, “Only the Paranoid Survive” describes Inflection Points and 10X factors that can impact a company positively or negatively and thus lead to launching a company into high growth at the expense of its competitors or conversely into a downturn from which survival is in serious doubt. In fact, if a CEO and his team is not able to capitalize on the inflection point, a business exit is more than likely. Grove uses the case of Intel’s exit from the DRAM business in the mid 1980s and the response to the Pentium bug debacle in 1994 to highlight how the company moved off of an inflection point in an upwardly, positive way.

Intel was founded in 1968 by Robert Noyce and Gordon Moore to develop the DRAM, an integrated circuit, as a low cost, small footprint replacement to core memory used in mainframe computers. Andy Grove was an assistant of Moore’s at Fairchild and was hired on as the first employee. Quite often he is referred to as the third founder, primarily because he became the most recognizable face of Intel as he transform the company from a commodity memory player to a dominate microprocessor supplier that expanded revenue from roughly $2.7B in 1987 to nearly $21B when he stepped down in 1997.

The company relied mainly on DRAMs during its first decade as sales exploded to $400M by 1978, however with growth came many competitors, including nimble startups like Mostek and well-capitalized Japanese conglomerates like NEC, Toshiba and Hitachi. The field became over crowded and when the dollar soared in value relative to the Yen, price-cutting and dumping ensued to the point Intel’s market share crashed to a low of 1.3% in 1984. It would have been the end for Intel, the innovative silicon valley startup with some of the brightest minds in the industry were it not for the experimental work in the early days on a new memory called EPROM and a 4 bit calculator chip called the microprocessor. All three semiconductor building blocks of the modern computer were invented by 1971, three years into the company’s existence and yet each would reach its prime importance at various stages.

The often-recounted story of exiting the DRAM business occurs in mid 1985, a time that Grove describes as being after a year of wandering aimlessly. He is meeting with then CEO Gordon Moore in his office discussing the quandary of remaining in the DRAM business. Emotionally he and many of Intel’s employees are attached to DRAM as the device they road to success and in many ways critical as it was considered the technology driver for new process technologies given its uniformity and high volume. However, each generation of DRAM densities invariably had a different leader. To be profitable meant being first to market and without assurance, only deep pockets could guarantee survival across multiple generations. The Japanese had the advantage of cheap financing and the ability to employee multiple design teams in order to increase their chance of winning the next generation design.

As Grove looks out the window of his office at the rotating Ferris Wheel of the Great American amusement park, he turns to Moore and asks, “If we get kicked out and the board brought in a new CEO, what do you think he would do?” Gordon answered without hesitation, “He would get us out of memories.” And so the two walk out the door and reenter convinced that they must execute on the plan to get out of the memory business and concentrate on Microprocessors and EPROMs, which Intel would grow to dominate over the following years.

For those readers who are not close followers of Intel, there is sometimes an assumption that DRAMs made up the majority of the revenue and that microprocessors were a nascent business. In reality, the company was saved by IBM’s selection of the 8088 processor for its PC, which launched in 1981 and shipped roughly 400 thousand units in its first year or in the words of Bill Lowe, VP of the Personal System’s Group, more than the installed base of big blue’s mainframes. Also key was an investment by IBM in December 1982 to guarantee Intel had the resources to support the company’s growth and development of new processors.

While Intel would take three years to exit the DRAM business, Grove notes that credit had to be given to the middle managers making resourcing decisions on a day-to-day basis, such as allocating more production wafers to microprocessors than DRAM, as the critical part of the transition process. Still plants had to be closed and with it mass layoffs. Intel’s future survival and dominance would require a roadmap out of commodity and into a sole source technology leadership position.

Andy Grove’s remaking of Intel would continue during the next dozen years during which time he pushed AMD out of a second sourcing agreement that originally was required by IBM; he outmaneuvered the RISC processor competitors and Microsoft; subsumed all the ancillary chipset logic of the PC, sans graphics controllers; led a dramatic branding campaign that made Intel a worldwide recognizable household name; and kept the PC market split amongst many rivals with none attaining even 30% market share. All of these tactics added up to market dominance and a market capitalization of $197B, up from $4B when he took over and more than 50% higher than today.

The story of Intel’s dominance from the 386 generation until the end of the century can sit in mighty contrast to the missed mobile inflection point of these past ten years and what is likely the next one, that of its leading edge process technology that enables high margin x86 server and PC processors and could be used with others in a Foundry arrangement. Recounting the history of Intel allows one to view not only the inflection points but the mistakes and successes along the way. Survival, in Grove’s book was more than Paranoia, it was reinforcing a market trend as well as developing contingency plans, listening to the remote Field Sales Cassandras and proactively developing and testing for new markets. Grove was not mistake free and some initiatives started under his watch were not snuffed out in time to prevent damage to the company. All this is what makes looking at Intel uniquely interesting.

0 Replies to “Revisiting Andy Grove’s "Only the Paranoid Survive"”