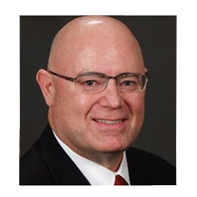 The Internet of Things is on every technology mind these days, but what does it mean for the EDA community? Dennis Brophy of Mentor Graphics says the billions of things we are hearing about will not happen unless we find a way to build a lot more things, efficient things, and connected things. He has more thoughts in our recent interview.

Dennis has a wealth of experience in standards bodies and trend spotting, and this is leading him to participate in IoT conversations worldwide. He recently spent time at the Cisco IoT World Forum in Barcelona, and spoke at the IEEE Standards Association workshop on the IoT in Mountain View.

Why is an EDA guy so fascinated with the IoT? It’s not just academic interest. I’ll open with a Dennis quote that frames the problem nicely:

Up until recently, the creation of silicon has mostly been aligned with human population growth. Mobile handsets and PCs are good examples, flattening out after saturation to a nominal rate. When we start the Internet of Things with devices talking to each other, we have silicon demanding more silicon, and we start to move into exponential growth.

In context, 25-ish billion MCUs annually are a lot, driven by growth in complex systems like automobiles and simpler devices with localized control functions. The IoT is likely to grow much faster, spurring faster growth than even this chart from IC Insights suggests. ARM, MIPS, and Intel combined could fire up the capacity engine by an order of magnitude or more. 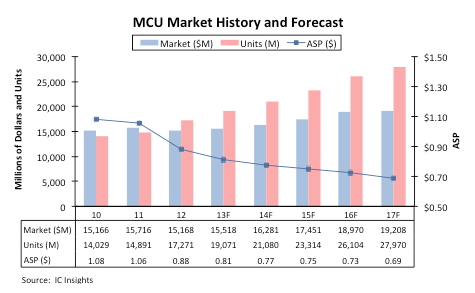 The catch is on the IoT, billions of devices have to talk to each other for the technology to take off. That means interoperability, and that means standards, and that means the pace of standards development has to pick up.

What does it mean to develop vibrant, meaningful standards today? According to Dennis, the IEEE SA looks for good ideas wherever they come from. The treaty organizations – IEC, ISO, ITU, and others – are internationally recognized, and produce strongly vetted work product, with governmental support. At the same time, the Internet has taken life with market-driven voluntary standards, usually lighter and more quickly developed but just as viable.

One good example is in healthcare, with the Continua Health Alliance and IEEE 11073. Devices can toss data around easily on USB, Ethernet, LTE, or a wireless sensor network, but if devices from different manufacturers do so in a random way, the back end will be hopelessly confused. To prevent big data in healthcare from being nothing but a big mess, IEEE 11073 establishes guidelines with a family of standards for data formats.

Closer to the parts themselves, power budgets are difficult to meet, and again standards are coming into play. IoT devices will often rely on self-powered strategies, either advanced batteries or energy harvesting techniques. Accellera helped define IEEE 1801, the Unified Power Format, which delineates power intent in EDA tools. Instead of using vendor-specific formats, power domains and other information are represented in standard ways.

Dennis sees these kinds of standards coalescing available technologies from numerous sources as the way to move faster, instead of competing on diverse technology trying to do pretty much the same thing. He says it is important to come to consensus and get moving, even if that means leaving some more challenging issues for the next go-round. I couldn’t agree more.

In closing, I asked Dennis what has to happen next, and he pulled out the need for a service overlay to help connect all these devices. This invokes needs for standards in software, privacy, security, and more. I think the industry senses the problem, but is somewhat reluctant to line up around standards for some reason. There is also the issue of “a lot of fathers” as Dennis termed it (don’t get me started on “fragmentation”), with many countries claiming ownership of the IoT domain. Dennis is looking forward to the IoT World Forum in Korea in March 2014 as a major event for airing out these and other issues.

This IoT “gold rush” is setting the stage for the next billion dollar companies, and Dennis sees the role of standards practitioners to lead us out of the wild, wild West into a more connected world. If you haven’t met Dennis, he’s a fascinating follow on social media to keep track of what is happening in the IEEE SA and EDA standards. He blogs on his standards evangelization activities for Mentor, and is on Twitter at @dennisbrophy.

What do you think of Dennis’ comments, and what else would you like the EDA community to be doing to help IoT silicon and software creation?