On Standards and Open-Sourcing. Verification Talks
by Moshe Zalcberg on 07-05-2021 at 6:00 am
View Profile
View Forum Posts

At Veriest we host VERIFICATION MEETUPS periodically to share verification wisdom. In our virtual meetings we’ve had hundreds of attendants from the US, Europe, Israel, India, and China. Most recently we were able to host a live event in Israel – I want to share feedback from that meeting.

Open Source Summit connects the open source ecosystem under one roof. It’s a unique environment for cross-collaboration between developers, sysadmins, devops, architects and others who are driving technology forward.

Join over 2,000 developers, technologists and industry experts in an exchange

We periodically see that “software ate the world” line – I’m pretty sure I’ve used it a couple times myself. The fact is, software doesn’t run itself; never has, never will. Somewhere there has to be an underlying computer. First it was on beads, then in gears, then in tubes.… Read More 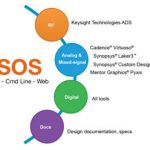 In my initial look at ClioSoft’s design management system created from the ground up for the semiconductor industry, I made the opening case for managing and reusing IP across an ASIC design organization. Let’s for a moment say we agree on the need for an enterprise software package to do design management… Read More