By now most people are quite comfortable with the idea of using an open source operating system for many computing tasks. It speaks volumes that Unix, and Linux in particular, is used in the vast majority of engineering, financial, data base, machine learning, data center, telecommunications and many other applications. It was not always so.

The history of commercial operating systems is replete with proprietary OS’s. At first there was tremendous resistance to the idea of using open source for something so fundamental. However, the advantages are pretty clear. One thing that adoption of open source OS’s lead to was a reevaluation of where value in the ecosystem resides. RedHat made a successful business model of offering superior support with an open source product. Point being that companies in these markets now go looking for places to add value rather than attempting to generate revenue by locking customers in.

Now you say this is all well and good for software, but what about processors? With the x86 architecture we have seen decades of litigation and conflict. Think of the millions of dollars spent on legal and court costs in the battles over that instruction set architecture (ISA). Indeed, the current licensing arrangement for x86 and its 64 bit variant boggles the mind. Even now Intel is shaking their swords at Qualcomm over ISA emulation of the x86 instruction set.

So the question needs to be asked: where is the value in processor design? Is the ISA a big competitive advantage, or if there was an open source ISA would the value shift to the specific implementation, and would the entire industry benefit by shared development? Well, we are about to find out. And the progress to-date is impressive.

Taking a quick survey of the processor market, we see that the big players are ARM and x86. The x86 ISA is of course divided up between Intel and AMD – just go to Wikipedia to read the whole gory story. There are a number of smaller processors serving the embedded market such as AVR, MIPS, etc. But, for the most part the big players in the ISA market are ARM and x86, both of which have evolved over many years. ARM for its part is trying to move up the food chain into servers, and Intel is trying to move down into the IoT and embedded markets. Each architecture comes with its own baggage and is having to adapt to make their move.

Reduced instruction set computer (RISC) ISA based processors have been around for quite a while, but none of them is enjoying huge commercial success right now. Many years ago, in an effort to create a vehicle for processor design research computer scientists at Berkeley started working on a non-proprietary RISC ISA. Fast forward many iterations to today and we have the RISC-V initiative. They have published a complete, usable and implementable ISA that is open source with no license and no royalties.

The RISC-V foundation now has over 65 members, including some of the biggest names in semiconductors, hardware and software. The ISA is modular, with a minimum base and standard extensions, as well as provisions for custom extensions. It supports 32, 64 and 128 bit architectures, along with operating modes for User, Supervisor and Machine. 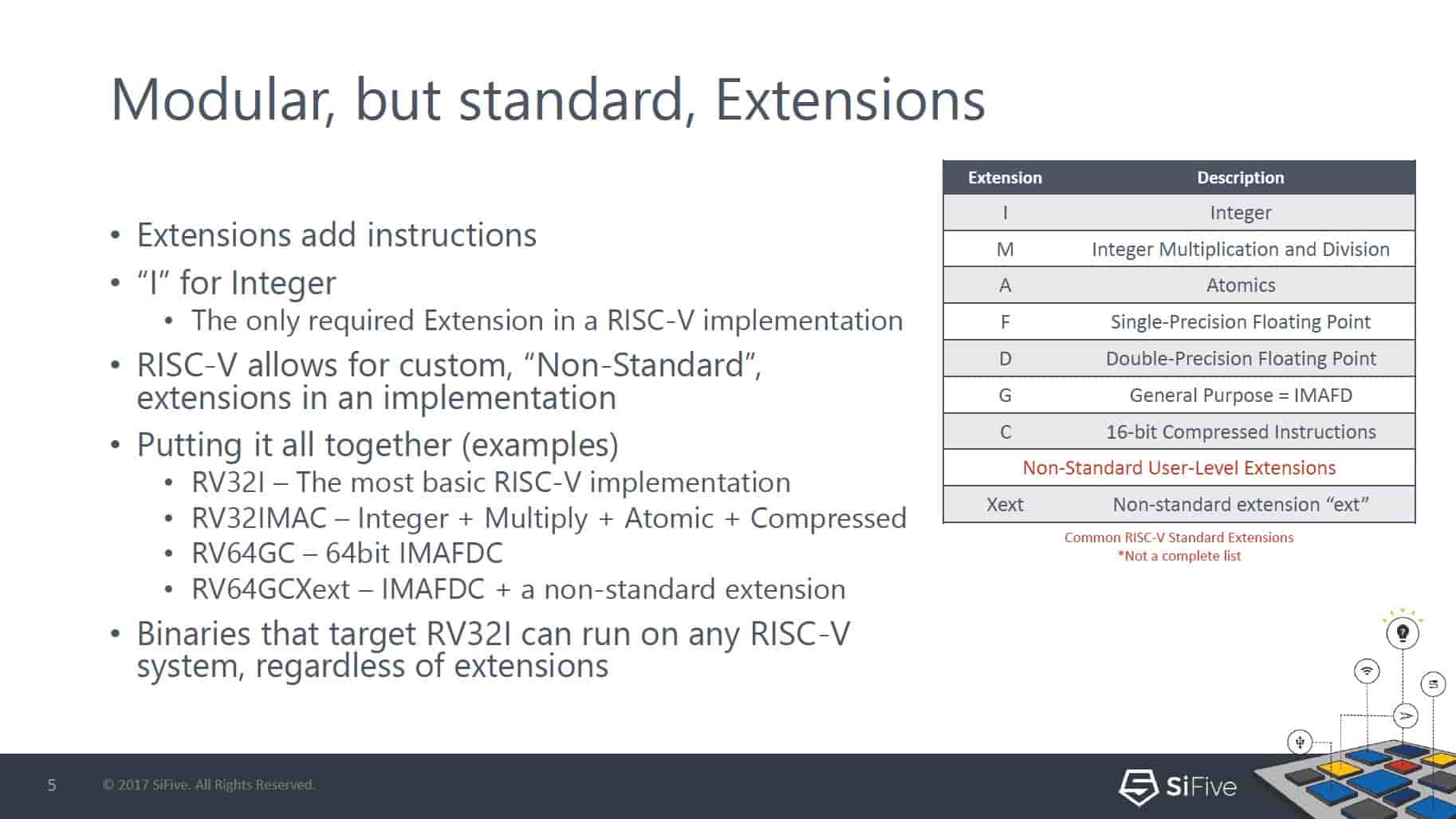 There are bit streams for use in FPGA’s, RTL impplementations, and there are off the shelf IC’s you can buy. One company, SiFive, even has an Arduino compatible development board available for purchase based on their working silicon. The San Mateo based SiFive recently presented their latest offerings at the Linley Processor conference in Santa Clara.

During their presentation SiFive covered many interesting points about RISC-V and their specific implementations. They have partnered with TSMC and have an off the shelf implementation of their E310 core available as a part or on their Arduino compatible development board. The Freedom E310 chip incorporates SiFive’s E31 RISC-V 32 bit core running at over 320 MHz. This specific core, the RV32IMAC includes the integer instruction set, the extension for integer multiplication and divide, extension for atomic instructions, extension for compressed instructions, the privileged ISA specification, and external debug support. It also comes with 16KB L1 instruction cache, a 16KB data SRAM scratchpad, onboard OTP NVM, a wide variety of clock and interface support.

The E31 core is also available for integration into SOC’s. It is available as an FPGA bitstream for evaluation, or as RTL for synthesis for evaluation prior to full licensing. Moving up their product hierarchy there is the E51, which is a 32 bit core that they suggest is ideal for applications such as SSD controllers or networking applications.

However, the star of their presentation at the Linley Processor Conference was their new U54-MC core. This core comes with four of their U54 cores combined with an E51. It is capable of running a full featured Linux OS. This quad core processor is suitable for AI, machine learning, networking, gateways and smart IoT devices. In TSMC’s 28nm it runs at 1.5GHz typical.

Here is a summary of the features of SiFive’s U54-MC, which they favorably compare to the ARM Cortex-A35. 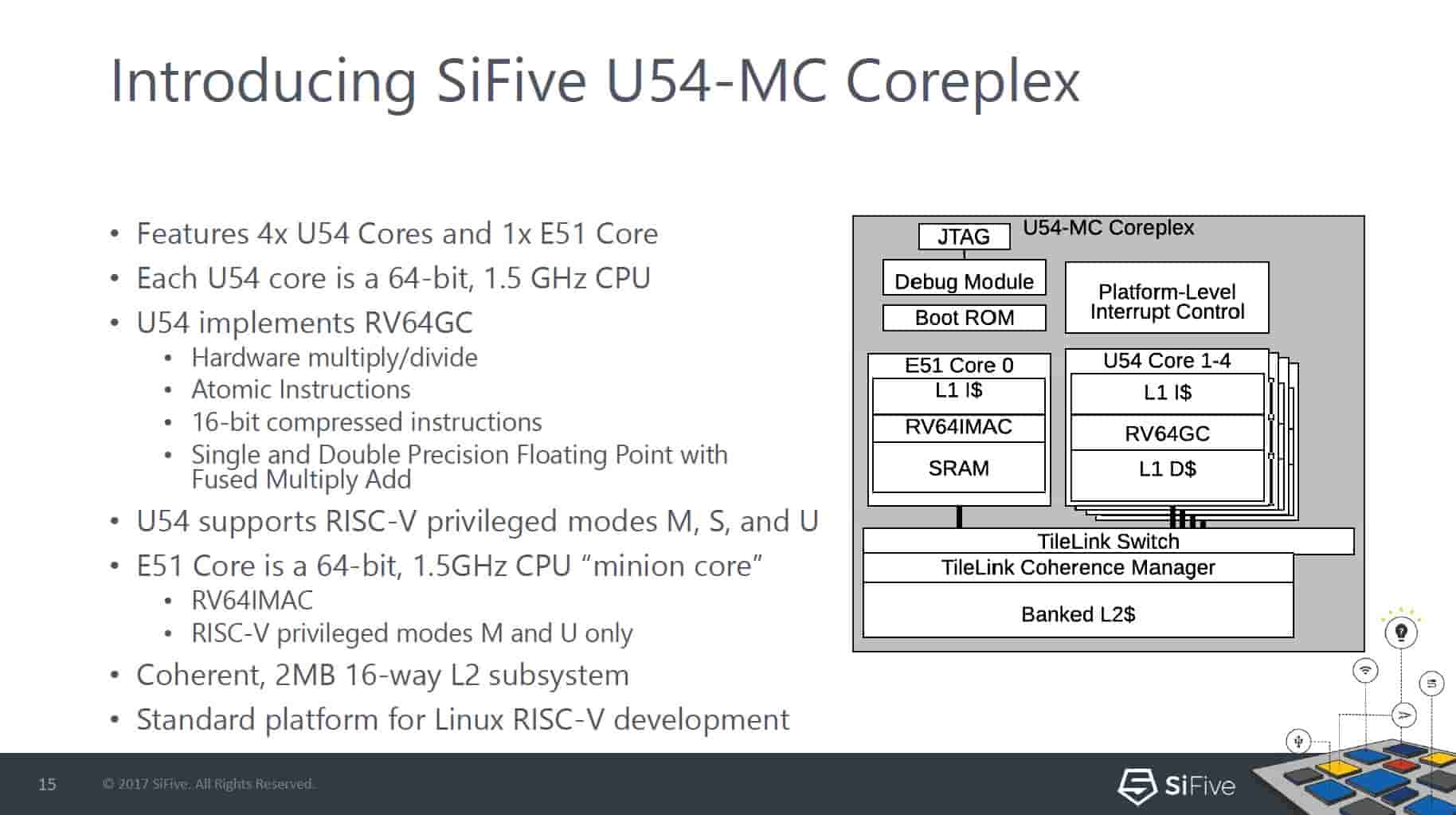 The final point is that a system designer might be concerned about the availability of development tools for processors with a new ISA. Because of the interest in RISC-V there has been a lot of development in this area. This is evident if you go take a look at the RISC-V Github repository at https://github.com/riscv. There is a wide range of support for things like OpenOCD, GNU, Linux, etc. Additionally, SiFive is making sure that users of their cores can access their Freedom Studio, which works on top of the Eclipse IDE. Freedom Studio is available on Windows, Mac and Linux. 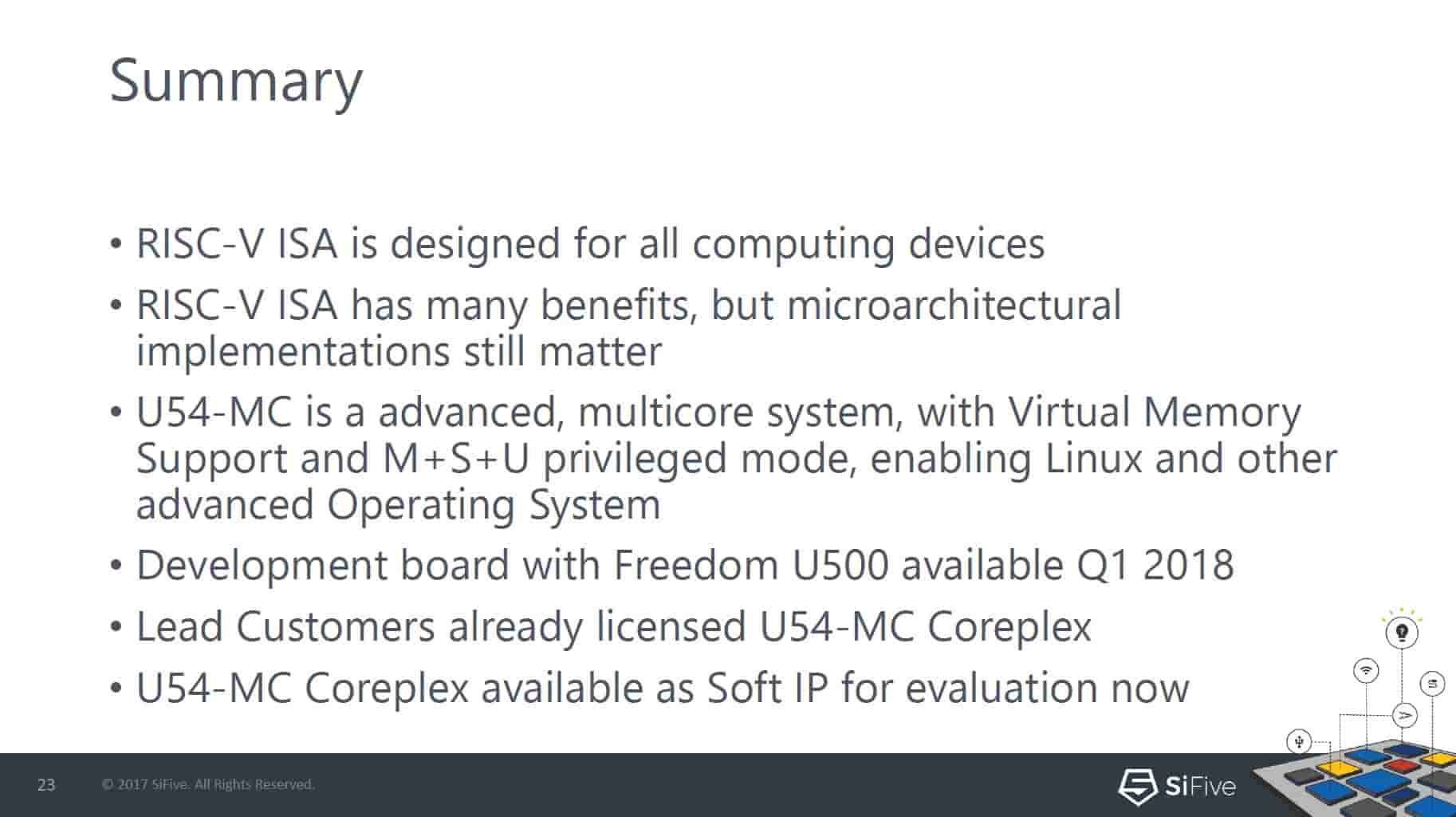 SiFive is also bringing a radically different business model to processor IP. They have streamlined the process so you can get the specifications without any NDA. FPGA bit streams are downloadable, and RTL is also easy to get. RISC-V, and SiFive along with it, are gaining a lot of momentum. Any new processor has to compete on technology, but it seems that RISC-V is a solid and stable specification and that SiFive is making big strides in implementation. I look forward to seeing how this plays out in the market. In the meantime, I might just go and order one of their arduino boards to get some hands-on experience with a RISC-V processor based system. The SiFive website has a lot more information on RISC-V, their own cores and the development tools and environments.