Intel server profits are growing, which isn’t a big suprise. But mobile losses are high. Although the amount lost by the Other Intel Architecture Group had a loss of $606M, that is actually down slightly from Q2 but up a lot from last year when they lost “only” $235M. This group includes Atom, the Infineon Wireless unit they acquired (which finally seems to have an LTE modem although I gather it is manufactured by TSMC not Intel), and the set-top/gateway chip unit (which I confess I didn’t know existed). At around $2.5B/year Intel is investing a lot into mobile. Even with some capital costs, that is a lot of people.

The enterprise PC market seems to have bottomed out (it is a lot less vulnerable to tablets than the home PC market) and although customer inventories (the PC manufacturers) rose they are below historic levels.

As Daniel speculated recently, 14nm is slipping and Intel plans to start manufacturing the 14nm Broadwell CPUs in Q1 with commercial launch for the second half of next year. Broadwell is the tick-tock shrink of Haswell, although the seem to have made some microarchitecture changes and added a few new instructions. Interestingly, as late as the Intel Developer Conference CEO Brian said it was not delayed although the equipment industry just took the delay as a done deal.

I know some people are interested in the Intel stock price, which has been basically flat for 10 years, but I’m not one of them (I own no Intel stock except in S&P500 index funds which presumably do).

To me the three big questions about Intel are process lead, mobile, and foundry.

Intel maintains it has a big process lead over everyone else (read TSMC) but as Intel has slipped out a bit and TSMC seems to have pulled in a bit there is not much light between them. But there is still everything to play for and how everything ramps next year is going to be critical. 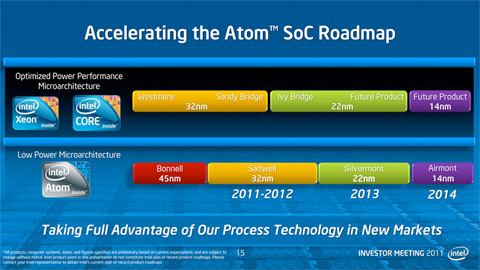 Mobile is the next big question. Microsoft realized they had the same problem. Desktop revenues are big and not going away but it is not an engine for future growth, so they bought Nokia. We’ll have to wait and see if they can make a real success of that. Intel has the same problem. They bought StrongARM (from Digital) and renamed it Xscale, tried to use it for their first mobile strategy and ended up selling that business to Marvell. They bought the Infineon Wireless group which I believe struggled once Siemens (its old parent) got out of handset manufacture. Their current strategy is based around Atom, which is Intel architecture. They are assuming that in tablets, binary compatibility with office is important but since Microsoft just wrote off nearly $1B in tablet inventory, that remains unproven. It is even less clear in smartphones. If they manage to ramp this business it will be in spite of being Intel architecture (instead of ARM) and not because of it. Of course this strategy has slipped too, partially because 14nm has slipped and partially, I think, because server microprocessors get all the early volume ramp.

And foundry. Intel has entered the foundry business. So far the only announced customers are FPGA, Altera being the big one, which has the big advantage that Intel doesn’t need to build an entire EDA toolchain and IP ecosystem to be successful. There are rumors they will be doing foundry business for Cisco, with perennial rumors that they are talking to Apple and Qualcomm (which at the talking level I’m sure is true). It is hard to do well in the foundry business if you are also competing with your customers so I don’t see how they can have a mobile strategy that has them competing full-on in the mobile market while building chips for Apple or Qualcomm. But Samsung has carried this trick off so far, again based on having a process and being able to ramp it, so it can be done. But to be a foundry for anyone other than the most leading edge companies (who typically build their own IP, and Intel is a big customer of EDA so the tools should work on Intel’s process as a side-effect) they will need to build a foundry ecosystem as both TSMC and GF have done.

Intel’s stock price in a couple of years will depend on these megaquestions more than whether their op ex this quarter are $50M higher than forecast.