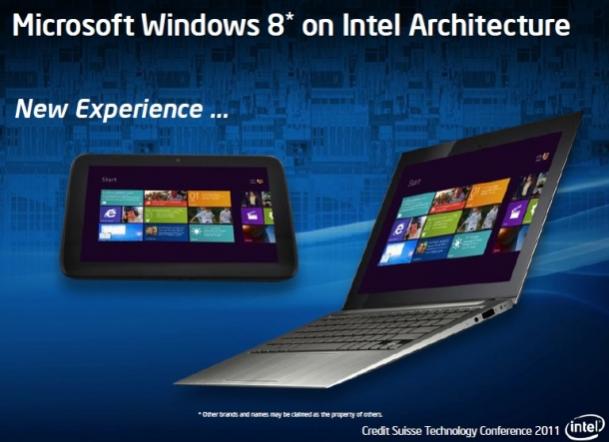 A Bloomberg article from early July caught my eye as it portends further changes in the competitive mobile market landscape. Intel is now in the business of paying Taiwanese panel suppliers to ensure the supply of touch-screen panels for PC ultrabooks. In essence it says that to win in the PC market, Intel has to mimic Apple and go more and more vertical in the supply chain. Apple’s stellar growth makes it difficult for PC manufacturers to forecast true demand out 3 to 6 months and given their minuscule profit margins they have to veer towards the conservative or face the risk of going out of business with excess inventory. Intel, like Microsoft is faced with having to control its destiny vs. the laissez faire Wintel model that has existed for 30 years.

In a previous blog, I mentioned how Microsoft may have started a Thermonuclear War with its customers (e.g. HP and Dell) when it introduced its Windows 8 Tablet – or should we say pre-announcement of Win 8 Tablets. Microsoft and Intel are showing signs that the combined profits that they derive from the PC market are too high for their customers to price at a suitable discount against the growing Apple Empire. Apple buries its O/S cost and in the case of iPADs and iPhones its CPU cost. These costs are lower than what Microsoft and Intel charge their PC OEMs and neither one wants to give in as Tablets and Ultrabooks rollout this fall. Given the strength of the iPAD growth and the now almost assured rollout of a smaller iPAD in September at $299, OEMs are concerned about what the true demand is for PCs, especially in the US and Europe.

Furthermore, Intel is in a short-term mode of keeping Ivy Bridge ULV prices high in order to force OEMs to abandon the idea of including an nVidia or AMD graphics chip in Ultrabooks because the additional cost pushes system prices out of range of what the market will pay. I expect Intel, however, to drive prices lower to capture the market in Q4 before AMD responds with a competitive solution. Currently the lowest cost Intel ULV part is over $100, which is way to high if Ultrabooks are to reach the $499 price point for high volume consumers. Over the long term though, Microsoft and Intel face unique challenges due to Apple’s growth. Both rely heavily on corporate and government purchases of PCs. Microsoft is threatened with the immediate prospect that Apple will make inroads with MacBook notebook PCs and iPADs. It is a direct hit on Microsoft’s O/S and Office Revenue stream. Microsoft has to have an immediate answer this Fall with a Windows 8 tablet, but it appears that HP and Dell can not deliver on a price that is below Apple’s iPAD.

Microsoft needs to step in and plug the hole with what will effectively be a discount on its software stack. Essentially give away the hardware to sell the Software (i.e. razor – razore blade model we are all accustomed to). Intel has a different scenario playing out and appears to be in a stronger position. In the short run it is executing to a plan that calls for cannibalizing AMD and nVidia ($10B+ revenue) with the ultrabook platform, even while PC growth slows at the expense of iPADs. The investment in Taiwan panel manufacturers will likely come with an exclusivity that bars AMD and nVidia silicon from showing up in the end product. From mid 2013 onward, Intel has to win Apple’s business as it attempts to force the whole mobile market to the leading edge process node.

Qualcomm’s misread on demand for its 28nm 4G solutions is a significant sign that the industry based its smartphone and tablet business models on an (n-1) process technology instead of being out over the ski tips. By (n-1) process, I am speaking of how many semiconductor suppliers were counting on 40nm being the volume process for mobiles this summer and fall and 28nm being a 2013 volume driver. Longer term, when Intel gets its baseband capabilities closer to Qualcomm’s, the leading edge will be determined by Intel’s latest process.Intel’s PC business model from the 1990s through today has been all about delivering processors on the leading edge. The trek they are taking to 14nm with mobile processors and Atom’s with a robust communications platform speaks to the opportunity to cannibalize Qualcomm and Broadcom. However, en route to this scenario it is looking like they will need to take a greater role in propping up the PC system supply chain.