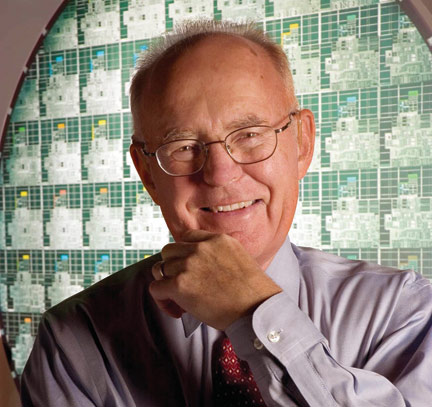 Today’s process technology is not just 4 times that of when the downturn began in 2008, it is at a magnitude that has enabled companies the freedom to move beyond the tax and regulatory grasp of many Sovereign nations that are now having difficulty paying their bills. Moore’s Law is the Overwhelming Force that is bypassing the immovable object known as too big to fail governments. As we gear up for another election season, a realization has emerged that the place where things are going swimmingly and money is piling up is none other than Silicon Valley. For politicians and governments to get access to this pile of money they will have to play nice and offer significant tax cuts that allows the Trillions of dollars that sit overseas in to come home. Apple, Cisco, Google, Intel and the rest of the high flying Silicon Valley firms can unleash this tidal wave of cash in increased investments at home while paying off politicians from both parties. This, as Obama has recently communicated, will be the major storyline of the 2012 Presidential Campaign.

Winston Churchill once remarked, “You can always count on the Americans to do the right thing – after they have tried everything else.” Now that just about everything else has been tried, the politicians will try to do something completely different, letting the strong, thriving high tech companies to be America’s primary economic engine for the coming decade like it was in the 1990s.

The political dance that started 12 months ago between the politicians and silicon valley didn’t become serious until just recently. All expectations of economic revival were cut short by Europe’s Sovereign Debt Crises and Wall St tanked again. Elections are coming soon and politicians need money from new sources as the old ones dry up. The Trillions of Silicon Valley dollars sitting overseas is not an accident. It sits there because to bring it home would incur a 35% tax. If the rate were dropped to 5-10%, then the floodgates would open. Expect the miracle wrapped in a nice fig leaf story about exchanging lower rates for the promise that companies invest in new buildings, equipment and jobs. I say expect a miracle, because Apple and the rest of the mentioned companies are gushing cash at a rate that is astronomical and politicians would just hate to see it not end up in the pockets of the people who need it most. The well won’t run dry for years.

To give one a sense how times have change since the 65nm process node was in fashion, recall that at the beginning of Obama’s term, the focus was on saving the unions and investing in the future slam dunk industry called solar. Meanwhile, California continued to bleed companies, jobs and money. Without a vibrant Silicon Valley with lots of IPOs, California can’t afford to stay in business. The Democrats without a thriving California are out of office and out of money. Obama now realizes that he needs to show extreme favoritism to Apple, Google, Facebook, Cisco, Intel and the rest of the who’s who crowd.

The upside to the President’s need to win an election and to put in place a campaign funding source for many cycles is that the current Silicon Valley, not the one that wanted to be left alone in the 1990s (think TJ Rodgers), will likely get considerations beyond the tax cut. Taken at face value, Obama’s proposal calls for taxes to be reduced on companies who invest in the US and raised on those who invest overseas (think Fabless semiconductor companies). However, some companies with high R&D like Intel and Google will likely push for relief there as well. And why not, increasing the engineering head count in silicon valley is a good thing for the President’s Party. Apple though might counter and request a break for opening up retail stores or a Data Center. Google and Facebook would concur on the Data Center subsidy. Intel on the other hand would love to get a break on its new 14nm Fabs or future 450mm fab, especially since Paul Otellini says they cost a $1B more to build in the US than in Taiwan. This is where congressional sausage making gets to be interesting.

For Intel to remain at a 27% tax rate while fabless vendors are as low as 11% makes no sense. Nor does Apple’s 24% tax rate look fair up against Google’s 7%. When the bubble burst in 2000, Silicon Valley lost 200,000 jobs, many in the semiconductor industry. It was the IP of the valley that has kept it in the technology lead but those jobs are sorely needed. We may finally get the attention needed to turn Silicon Valley into a bigger driver of the economy, much bigger than 2000. Nothing can be more glaring of the opportunity waiting for us than the startling fact that Apple has $100B in the bank and is adding it at the rate of $15B a quarter. We should remove any and all roadblocks.

With Intel, the storyline gets much more interesting as Obama and Otellini have struck up a special bond in the past year. Two years ago Otellini was excoriating the President and now he is on Obama’s Council on Jobs and Competitiveness. The only other tech related person on the council is John Doerr. This council was formed after Obama visited Intel’s Oregon site last year. Last week, the day after the State of the Union, Obama paid a visit to the construction site of Intel’s new 14nm fab located in Arizona. The purpose of his visit was to emphasize his new tax proposal and to start broadcasting his election year economic theme of bringing jobs home.

Imagine during these visits that Otellini whispers in Obama’s ears that with the right incentives the whole future of the semiconductor industry can reside in the US and with it thousands of jobs and the associated tax revenue. When combined with the Bernanke printing presses depreciating the currency in a daily drip-by-drip manner, the US government is going to make life more difficult for fabless vendors to be invested in Taiwan instead of the US. This is why Qualcomm, with its $21B in cash has to consider building a fab in the US. AMD, Broadcom, nVidia, Altera, Xilinx, Marvell and others will be pleading for Morris Chang to build in the US or alternatively make peace with Intel and enter a foundry agreement. Unless, of course, the Obama tax agreement that develops only applies to US Multinationals, then it is a completely new ballgame for Fabless Vendors. The Silicon Valley playing field could end up being tilted towards Intel.