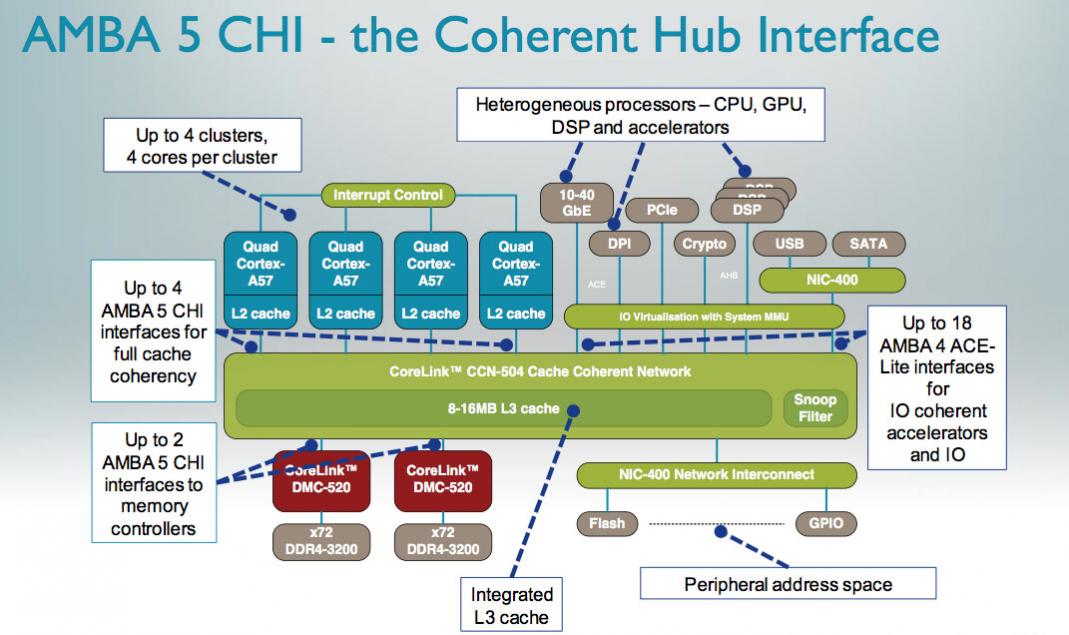 ARM announced several new products at DAC in a number of different spaces. In addition I got invited to a briefing with Simon Segars, 30 days from when he takes over as CEO of ARM. I asked Simon if he expected to make any major changes and he basically said ‘no’. ARM’s basic strategy in both mobile and now enterprise is coming to fruition. Unlike Brian Krzanich, recently installed as CEO of Intel, ARM doesn’t need to make major changes to get into some fast growing markets. ARM is already in mobile, and while Intel has one or two high profile wins (Samsung tablet for example), ARM is currently dominant.

The new products announced started with AMBA 5 CHI specification intended for the enterprise market. It enables high-frequency non-blocking coherent data transfer between 10s or even hundreds of processors, with support for distributed level 3 caches and very high data rates. It was developed with input from over 20 ARM partners. Verification IP is available from Jasper, Cadence, Mentor and Synopsys.

Smarphones are, of course, growing fast. But the fastest growing part of the market is not the ultra-premium smartphones that us silicon valley types have, iPhone and Galaxy primarily, but the mid-range market. ARM announced a new processor specifically target at this mid-range market called Cortex-A12. In addition, they announced a mid-range Mali GPU, the T622, and a new Mali T500 video engine. Finally, in the physical library space, they announced performance optimization packages (POPs) for these new processors.

The mobile space is growing fast. There will be over a billion smartphones shipped this year, and tablets are already outshipping PCs (hence Intel’s need to do something so as to participate in this market, either with successful products or a successful foundry strategy). ARM has a good entry level offering with Cortex-A53, and a good high end offering with A57. The new announcement drops in between.

The A12 has a 40% performance uplift from A9 with the same energy efficiency. It will (although not yet) work in big.LITTLE configurations and has good security with virtualization and TrustZone. The new Mali-T622 is the smallest GPU on the market with one or two cores. It has a 50% energy improvement over the T600 series. There is also the Mali-V500 single core 1080p60HD (scalable to 4K120) video encode/decode. With ARM Frame Buffer Compression (AFBC) gives 50% lower memory bandwidth needs and so even lower power. And for premium content providers there is TrustZone secure video build right into the video engine so that encrypted content make it all the way into the decoder.

Bottom line: with massive smart mobile device growth, the market continues to segment. The mid-range, where these new cores are positioned, is expected to be over half a billion units by 2015 and will require full-featured SoCs to hit the appropriate price points.