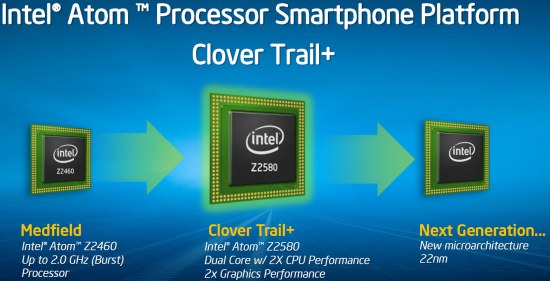 Ever since Intel announced that they will leverage their advanced process technology leadership into the mobile SoC market I have expressed my doubts. I know how Intel designs their microprocessors, having worked for many of their vendors over the years and having friends at Intel who are actually doing the work. Disclaimer: Intel was one of the first companies to offer me a job out of college and I have been a big fan of their microprocessors since the beginning, but I’m a fabless SoC guy so I’ve had issues with Intel and their Mobile SoC strategy from day one.

The announcement I have been waiting 1+ year for has finally come. At IDF this week Intel finally admitted that making microprocessors and SoCs are not the same and will require very different design and manufacturing practices. The first Intel 22nm SoC (Bay Trail) will come out “sometime next year” which is PR speak for the end of 2013, if they are lucky.

Today Intel is shipping 32nm SoCs which compete against TSMC/Samsung ARM based 28nm SoCs like the one in the new iPhone5. Next year the Intel 22nm Atom SoCs will compete with the TSMC/Samsung ARM based 20nm SoCs. So much for the so called Intel advanced process lead! I don’t know about Samsung but TSMC 20nm SoCs will tape out in Q1 2013 with production Silicon coming in Q4 (my guess). And I’m not talking about one mobile SoC like the Intel Bay Trail. I’m talking about ARM based mobile SoCs from the likes of Samsung, Qualcomm, TI, Broadcom, Marvell, Apple, Huawei, NVIDIA, MediaTek,etc… and a hand full of others from China.

Intel was nice enough to invite me and Paul McLellan to IDF this week. Even nicer, ARM had an open house a block away the day before. One thing I have to say is that Intel gives the best conference bag swag! The food, drink, and conversation however were much better at the ARM open house, absolutely.

One of my favorite tech writers, Dean Takahashifrom Venture Beat, was at the ARM open house and wrote a much better piece than I can on it so read his here: Arms race? On eve of Intel’s developer event, ARM argues it’s winning the mobile race. There were also reporters from tech gossip sites like The Inquirer but their articles are complete nonsense. Why bother inviting these buffoons? Seriously!

In addition to good food and drink, ARM had new phone and tablet demos with bill of materials (cost) of around $50. That is where the market is going so you have to ask yourself: What is Intel really going to do once they get into the mobile market? Or better yet, will Intel actually make a difference in the mobile market?

We talked to Simon Segers. Simon started at ARM in 2001 as the VP of Engineering and is now EVP and GM of the Processor and IP divisions. Paul and I also spent time with Suk Lee of TSMC, and ARM lead Mobile Strategist James Bruce. Time well spent! I’m sure Intel now regrets their premature and overly aggressive PR campaign against ARM and TSMC but it was certainly fun to watch!