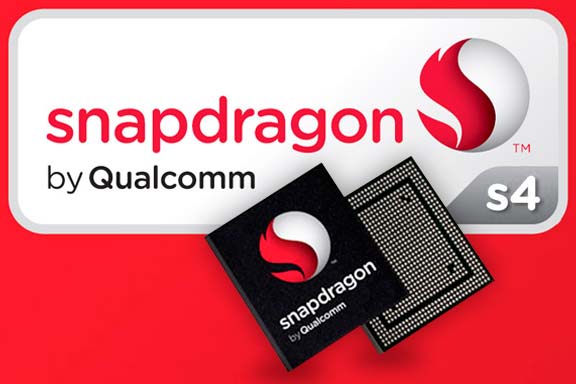 In the opener to this series, I alluded to a company designing their own approach, and it goes way beyond the graphics core in their solution. Qualcomm is unique in a holistic approach to a smart mobile device with their vertically integrated chipset, the Snapdragon S4.

By integrating the CPU cores, graphics core, modem, and DSP cores in a single device, and optimizing interconnects between cores and power management across the device, the Snapdragon S4 takes a systems approach with strong benefits for OEMs.

CPU: Current versions of the Snapdragon S4 feature the “Krait” core, which is a Qualcomm design built from the ground up on the ARMv7 instruction set instead of using the ARM core IP. It doesn’t compare directly to the ARM Cortex-A9 or Cortex-A15, but it falls closer to the Cortex-A15. Besides being able to implement in 28nm instead of 40nm as with the Cortex-A9, which has power and thermal benefits, Qualcomm put in a couple of significant performance features:

Graphics: Qualcomm again has their own graphics GPU design, the Adreno. The first versions of the Snapdragon S4 released with the Adreno 225. It’s not the most blazing graphics GPU out there – that title probably goes to the NVIDIA Tegra 3 right now – but the Adreno 225 is a big step up from previous offerings in the Snapdragon family, and it outperforms the iPhone 4S graphics. It’s an 8 SIMD design clocked at 400 MHz, and the memory bandwidth has been cranked up to double previous Qualcomm implementations. Coming soon is the Adreno 320, which offers support for DirectX 11, roughly 4x the performance of the Adreno 225, and support for gaming engines like Unity and Epic.

Modem: In short, the mobile modem and a couple of Hexagon DSP cores are built into the Snapdragon S4 architecture. Qualcomm says this is a world modem, supporting LTE, 3G HSPA+, EV-DO, and GSM/GPRS/EDGE in a single device. The saga of the HTC One X says a lot here – HTC hyped the NVIDIA Tegra 3 in their launch, but quietly had to switch to the Qualcomm MSM8960 for the US version of the One X in order to support AT&T with LTE. This integration also makes for a smaller, more power efficient device.

The block diagram is short on details of how these cores are interconnected. Qualcomm is believed to utilize technology from Arteris. Kurt Shuler of Arteris says that while companies are using similar SoC ingredients, there are big differences in core interconnects resulting in performance and power consumption differences, and a lot depends on how software manages the entire chip – which is something Qualcomm has spent a lot of time on.

Another viewpoint on the Snapdragon S4 comes from Sascha Segan in PC Mag. The whole discussion here centers on a simple concept: don’t just count cores and clock speeds anymore. If a benchmark scales well across multiple cores, like AnTuTu, quad cores can open up and run faster. We’re sure to hear more from the quad-core marketing machines, but benchmarks are showing the dual core MSM8960 to be extremely competitive right now. Not to be left out, the Qualcomm roadmap points to quad core in 2013.

In addition to the HTC One X, One S, and EVO 4G LTE, other devices featuring the Qualcomm MSM8960 are the LG Optimus D1L, the Sony LT29i Hayabusa, the Pantech P8010, and the ASUS Padfone. (The Nokia Lumia 900 uses an older single core Qualcomm Snapdragon S2 device.) These phones are lined up to be among the first to launch with Android 4.0 Ice Cream Sandwich (ICS), and in the case of HTC this represents a major product refresh.

Next up in the Smart Mobile SoC series: Samsung.