According with ESDA, EDA revenues have grown YoY by 16.2% in Q2 2018, and this is the good news for our industry. The bad news is the decline of SIP (Design IP) revenues, by (3.1%) at the same time. As far as I am concerned, this figure looks weird, so I will try to understand the reason why SIP category can go wrong in a healthy EDA market, indicating a growing design starts number.

The more than 20% growth for these companies is all but a surprise, if you consider that, in 2017, Synopsys alone had IP revenues of almost $530 million and 18% growth, and Cadence an estimated 21% growth for IP revenues. The good news illustrates the trend that IPnest is seeing on the Interface IP market since 2010 and on the overall IP market since we report these revenues (2015). Not a surprise, just the confirmation that the IP business is very healthy for these “reporting companies”…

It’s now time to look at the “weird” information included in this ESDA report. The strong decline of -17.2% of the revenues posted by the “non-reporting” SIP companies. According with this report, these companies “include” ARM Holding, CEVA Inc. and Rambus. All these companies are publicly trade and they post annual and quarterly reports, and IPnest is familiar with the reading of such reports (even if, in some cases, these can be less transparent than you could guess and expect).

This effectively result into a $53 million YoY decrease to be associated with ARM Holding.
CEVA Inc. delivers quarterly results split into Licensing and Royalty:

Effectively a YoY decrease of $3.1 million in Q2 2018, mostly associated with royalty (- $2.7m)
At this point, it’s useful to make a status and compare with the results as reported by ESDA (in $ m):

ARM and CEVA cumulated revenues are:

From these figures, Rambus revenues generated by IP (license + royalty, but not design services nor IC) should be:

Rambus report revenues in two group, “Memory & Interface” (MID) and “Security” (RSD). If we look at MID, revenues include: “chips, architectures, memory and SerDes interface IP Cores, IP validation tools, and system and IC design services” and RSD “offers a suite of products and services from DPA countermeasures and cores to our CryptoManager™ Platform, mobile payments and smart ticketing”. Let’s remember that we are only interested by the revenues generated by IP licenses or royalties, only a part of Rambus revenues… 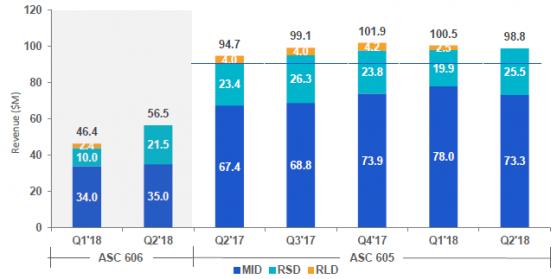 Before digging between which revenues are associated with IP or not, we discover that the revenues were reported last year under ASC 605 (accounting method) but are officially reported according with ASC 606 in 2018.

So, we can eliminate Rambus from the suspect list, as their business has grown, but the accounting method has changed, and Rambus is “apparently” guilty of $31 million YoY decrease in Q2 2018. And we can say that CEVA is responsible of a $3.1 million decrease in Q2 2018, but the higher loss is coming from ARM, with minus $53 million, including -$63 million for licensing only.

ARM Holding case is more concerning. If the royalty revenue has grown by 4% or $11 million, their IP license revenues has decreased by 43% or $64 million. If you remind that today’s licenses will generate tomorrow’s royalty, you can predict that ARM royalty revenues will most probably decrease in the future (18 to 24 months), even if it’s impossible to say by how much. It will depend if these missing licenses are related to wireless application processor, or not. We have to come back at their report, very comprehensive Excel spreadsheet (the last quarter on the right is Q2):

There could be several reasons to explain this Q2 2018 ARM IP licensing drop as a long-term trend.

No doubt that RISC-V is attracting customers, thanks to the more favorable business model. Moreover, this explanation is on line with the impacted product lines, Cortex-R and Cortex-M. No doubt as well that the competition from Synopsys (ARC CPU IP), Andes (CPU IP) and Cadence (Tensilica IP) have both an impact.

There could be a deep management issue. Before SoftBank acquisition of ARM, Warren has been CEO for a decade, and he was the only CEO. Now, ARM CEO Simon Segars may have to share his decision maker job with SoftBank’s CEO? But this is just a pure supposition…

According with David Manner, ARM may have started to develop chips targeting IoT, becoming a de facto competitor with his own customers and this would clearly be a fault. If you want to sale IP, you don’t compete with your (potential or actual) customers. Imagine that TSMC decide to develop wireless application processors! TSMC doesn’t do it, and probably will never do! 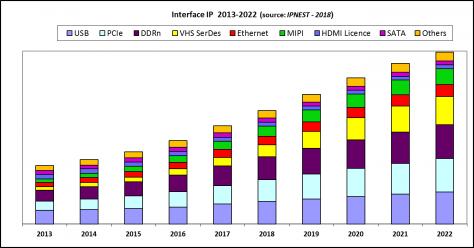