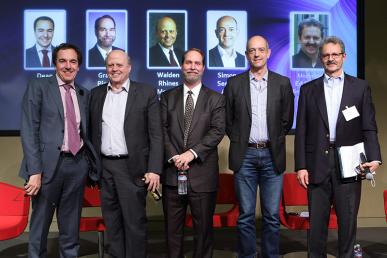 The funniest line of the EDA CEO Outlook event was that we should rename our Amazon Echos Wally. Yes Wally is that smart and he remembers pretty much everything. I wish I could rename my Echo Wally because my daughter in-law is named Alexa so we have to turn it off when she is over. The discussion took an interesting turn with EDA in the cloud. Dean Drako, CEO of IC Manage, hijacked the evening with a prepared statement on how now is the time for EDA in the cloud. I posted a poll in the forum so let’s wait and see what the crowd thinks. My bet is that it will be overwhelmingly in favor of EDA in the cloud so the $5B question is: Why aren’t we there yet?

Poll: Do you want your EDA tools in the cloud?

During my time with Berkeley Design Automation and Solido Design over the last ten years we would ask customers how many simulations they ran and the answer was always not as many as they would like due to time constraints. What that really meant is that they did not have enough software licenses and/or compute resources which is why we have fast spice and statistical verification tools like Mentor AFS and Solido Variation Designer.

Based on that experience I gladly accepted a business development job with an EDA cloud start-up. My task was to get the EDA companies on board with cloud and work out a profit sharing deal. Interestingly enough ALL of the EDA companies we met with were ready, willing, and able to jump into the cloud. This was the second or third time they had been asked and their only requirement was to get a name brand customer to collaborate with. We failed of course as have many other commercial EDA cloud efforts including the one from IBM in 2015. We never really got past the lawyers much less the internal IT groups.

Today EDA server farms are either in the back room or configured as a private cloud somewhere cheaper depending on the size of the company. TSMC of course has a huge private cloud for its customers and partners. ARM also has a significant server farm and when the subject of cloud came up Simon jumped in and pretty much begged for an EDA cloud. Wally added that most EDA companies including Mentor already have a cloud option for things like emulation but it really is customer driven.

The reality of the EDA Cloud situation has not really changed much from when I was at the cloud company. As a cloud user myself (SemiWiki.com) my experience is good and bad. Yes it is definitely much more cost effective and I have a staff of support engineers at my disposal 24/7. But when there are problems I really am at the mercy of my cloud provider. My site was recently migrated to a new server and it caused a whole host of problems even though we only have a handful of software products running. Software updates are always a challenge and not “owning” the problem is very unnerving. Big EDA customers have been telling me lately that they prefer “one throat to choke” (less vendors to deal with) when it comes to EDA and leading edge design. Even though EDA is consolidating, adding in a cloud vendor (another throat to choke) still seems to be a risky proposition for medium to large chip companies, my opinion.

Here is one of many cloud discussions on SemiWiki (in 2012). Have things really changed other than semiconductors now being a $400B market?

Chip in the Clouds – “Gathering”