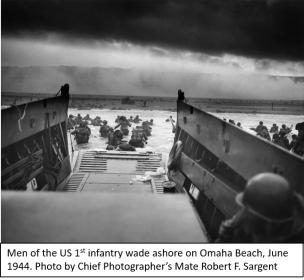 I had the privilege to attend a five-day PIC (photonic integrated circuit) training hosted by 7-Penniesand Tektronix in San Jose, CA this week. This training was quite comprehensive and covered photonic materials and platforms, design automation, fabrication, packaging and test. It also included invited talks from photonic luminaries such as Robert Blum of Intel, Peter de Dobbelaerre of Luxteraand Chris Cole of Finisaras well as hands-on training sessions from VPI Photonics, Lumerical Solutions, PhoeniX Softwareand Cadence Design. While there was much to take in from the training itself, the one item that struck me most was how completely Cadence Design has managed to secure a leadership position (e.g. a photonic beachhead) into what should not have been an area of strength. Let me explain.

PDA (Photonic Design Automation)
Integrated photonics has been going on for years and in fact there is an entire eco-system of PDA companies that have been working together for quite a while now that even have their own standards for tool integration. The group made up of PhoeniX Software, Filarete, Photon Design, VPI Photonics, Synopsys RSoft, Lumerical Solutions and OptiWave has a complete application programming interface defined that allows them to trade both design and PDK information back and forth enabling multiple different front-to-back flows for PIC design. All of these tool vendors also have wide support from various photonic fabrication and packaging facilities. PDKs are becoming more mature and multi-project wafer runs abound. Given this you would think one or more of these tools vendors would be well positioned to be king of the photonics hill.

EDA (Electronic Design Automation)
Meanwhile over the last five or more years Mentor Graphics has been quietly working away on inserting itself into the photonics supply chain using its Pyxis and Tanner layout editors which have the ability to do full angle rotations required for photonic design along with enhancements that have been made to Calibre for curvilinear design rule verification. This strong and early position in photonics would lead you to believe that perhaps Cadence had been caught with their proverbial pants down. It truly looked like they would be too late to the photonic dance and would be left on the outside looking in. Whoops! Got that one wrong. 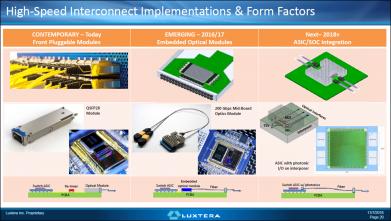 Last month we saw the fruits of Cadence’s labor as they showcased their EPDA integration with PhoeniX Software and Lumerical Solutions, arguably two of the most prolific PDA tool vendors in the market. While the technical solution is both elegant and powerful, the thing that woke me up to Cadence’s sudden position change in photonics was the presentations made by Intel, Luxtera and Finisar. All of these vendors had one thing in common. They all were in some way, shape or form integrating custom, high-speed and analog electrical ICs with their photonics.

Case in point is this slide from Luxtera. Note the progression of integration over time from left to right at the bottom of the slide (zoomed in sections). The point is that slowly but surely photonics is moving its way in towards the electronic ICs. Today it’s at the edge of the board. In the next year or so it’s on the board itself and before the end of decade it will be right next to, under or on the same die as the electronics.

OK, so what has that got to do with Cadence’s position in photonics? Everything.

For good or bad, Cadence owns the custom IC implementation market which includes the analog and mixed-signal ICs such as TIAs, high speed modulation and CDR (clock data recovery) circuits used in transceiver systems. As transceiver vendors move to higher channel rates they will be more constrained by the speed of the electronics that interface to the photonics than by the photonics themselves.

That fact will require companies to have tighter integration of the two design domains (analog/mixed-signal electronics and photonics) to continue the inexorable march towards higher and faster bandwidth density. Cadence owns the installed base on the electronics side of that equation.

Moving forward, telecom and datacom are leading the way for photonics and as Cadence captures this space they will then be a natural solution for other photonics applications. In watching these presentations, I suddenly realized that Cadence wasn’t trying to penetrate a photonics beachhead.

Cadence was already on the photonics beachhead all along and their integration to PhoeniX and Lumerical were meant to secure the beachhead by closing their last remaining weaknesses in the photonics space, namely native curvilinear shape and geometry manipulation (provided by PhoeniX) and photonic circuit simulation (provided by Lumerical). Remember also that Cadence has a strong lead in most things having to do with SiP (system in package), 2.5D and 3D integration of dice on interposers and modules which will be a must-have capability for 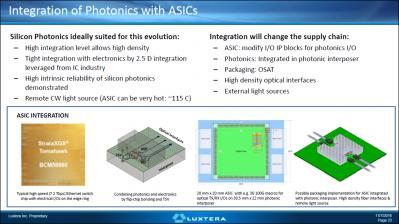 So, as I said back a month ago, the week of October 20[SUP]th[/SUP], 2016 should be marked as a watershed event for integrated photonics. Hindsight is 20/20 and it’s becoming clearer that Cadence has made a very relevant and strategic move. Makes you wonder what we will look back and see a year from now.