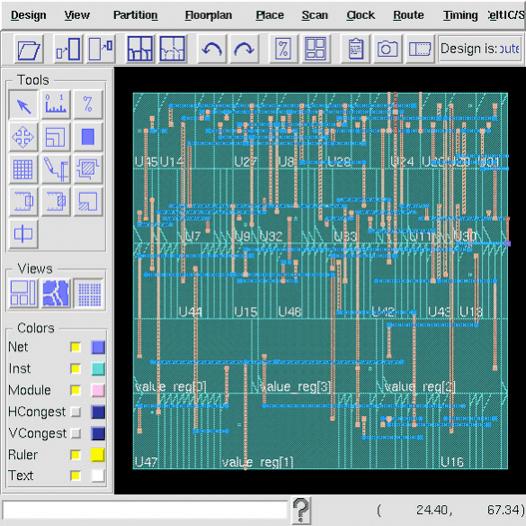 Cadence has a series of webinars about their digital flow, focused on 28nm design. It is easy for all of us in the EDA ecosystem to assume that everyone is already doing 20/22nm design, if not 14nm already. But in fact most designs are still being done at 45nm and 65nm; 28nm is still a big challenging step.

One of the tools in the Cadence digital flow is First Encounter, which we used to describe as a floorplanner but is now described as a tool for design exploration and prototyping.

This reminds me of an interesting lesson I learned while I was working at Cadence. We had fallen behind in floorplanning and place & route and so we decided to kick off one of those megaprojects that Cadence used to embark on back then. We called it Integration Ensemble. It would be a everything everyone ever wanted. To make sure, we went and talked to all our major customers and ended up with an insane list of features Integration Ensemble should provide. Since we needed to win the air war too, we briefed Richard Goering (then at EETimes) on Integration Ensemble and he wrote about it as the next great thing, coming real soon now. Well, it turned out the project was so complicated that the schedule was long.

Customers insisted, in particular, that the absolute most important can’t-do-without feature was multiple power supplies, which were starting to go mainstream. Multiple power supplies turn out to be hugely complicated to implement since the power supplies don’t actually show up in the netlist (as an explicit connection to every gate) so a huge number of tools need updating. Anyway, the project dragged out, Richard Goering got annoyed that we’d basically pre-announced something that was so far from delivery (I guess he’s forgiven Cadencethese days). Anyway, eventually it turned out all our customers, the ones who told us that we couldn’t possibly release Integration Ensemble without full multiple power-supply support, were all buying First Encounter (from Silicon Perspective). The irony being that it didn’t support multiple power-supplies. What people really wanted was fast placement and good routing estimation. Listening to your customers is not always good.

As Henry Ford once (reputedly) said, “If I’d asked my customers what they wanted they’d have said a faster horse.” Apple is also famous for not doing market research to find out what people want, on the basis that they won’t know they want, for example, an iPad before they get it. I certainly didn’t.

So Cadence bought Silicon Perspective (in a poorly constructed deal with no cap on the earnouts) for a large sum of money. It was what customers really wanted although they couldn’t articulate it, and they asked for a faster horse instead. So the lesson is that you can’t always trust what your customers tell you they want if it is not guiding incremental improvement to existing tools.

First Encounter remains a key part of the digital implementation flow. It is even more important today than when Cadence purchased it, since there is really no timing number you can rely on if the physical placement has not been done since so delay depends on interconnect more than anything else. Trading off performance, power and price (area) is much trickier than it has ever been and First Encounter is an environment for quickly doing the kind of what-if analysis that must be done early if a design isn’t going to embarrassingly blow out one of its budgets. Nobody wants a cell-phone chip, no matter how cool and sexy, if the standby time is only 4 hours.

Details on First Encounter are here. The webinars are here.

A Brief History of EDA