MEMS sensors play a huge role in intelligent systems these days. Mobile and IoT devices would essentially be blind if not for the rich variety of MEMS sensors integrated into them. The MEMS sensor market is growing rapidly, topping $10B in 2016 and slated to exceed $20B by 2020. MEMS is also growing in the RF market, where they are providing alternatives to passive and active electronic devices. Some surveys show that RF MEMS surpassed 6 billion units in 2016. In comparison the next most popular MEMS devices are microphones, which shipped 4.5 billion units in the same year. 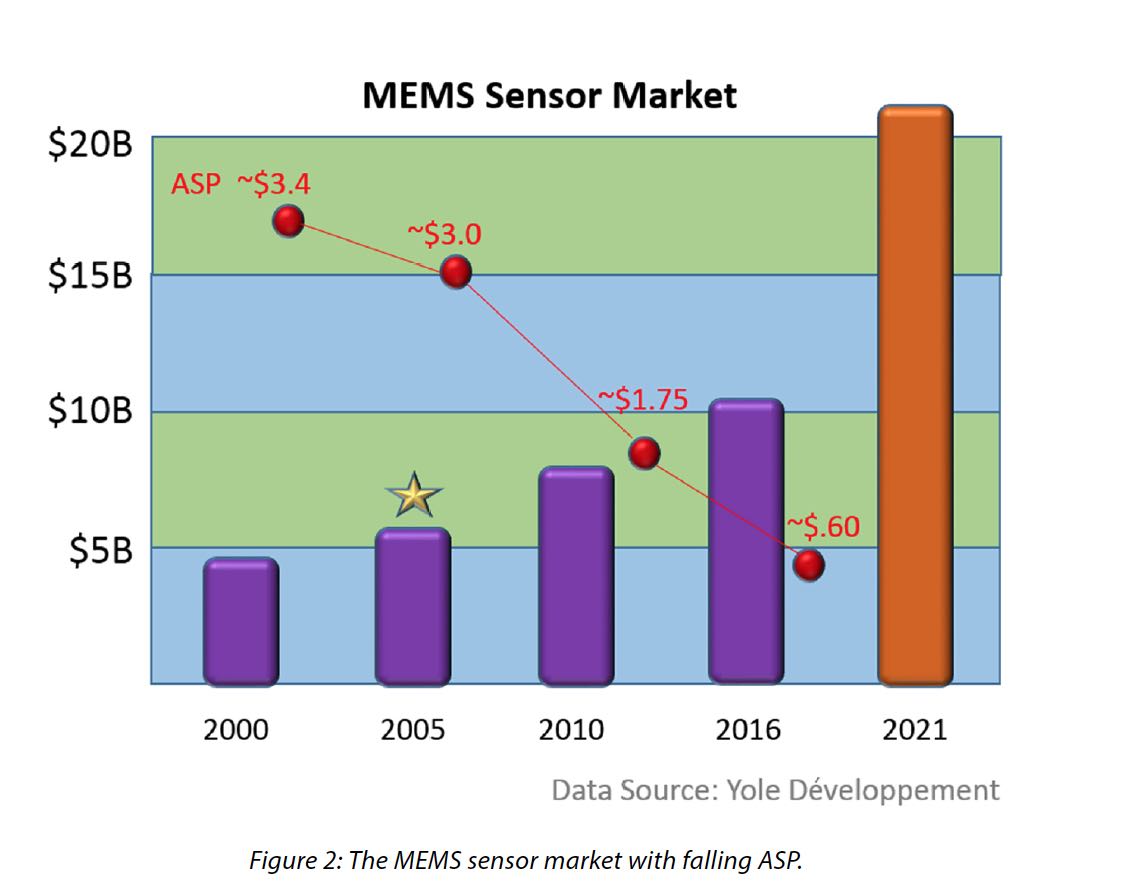 A pair of white papers from Mentor talk about the growing importance of the MEMS market and the design considerations necessary to integrate MEMS into intelligent systems. MEMS are used in almost every market, telecom, medical, industrial, defense, consumer, automotive, and aeronautics, among others. As you might imagine the consumer market accounts for the largest share, coming in at $28B in 2016. Impressive, yet not surprising considering how many are used in phones and other gadgets.

An important trend in MEMS sensor based systems is combining sensors into one package and implementing sensor fusion there as well. Sensor fusion not only merges sensor data so it is easier to process downstream, it also helps weed out artifacts and reduce noise in sensor data. It’s not uncommon to have 3 axis gyroscopes, 3 axis accelerometers, temperature, barometric and magnetic sensors all in one unit.

MEMS sensors are also outperforming their predecessors. One of the most interesting examples is an accelerometer from Memsic, that has no moving parts. It relies on detecting the motion of heated gas molecules induced by acceleration. It consists of a minute flat chamber with a heater at the center and several distributed thermal sensors. In the absence of motion, the thermal sensors will see a uniform temperature gradient, which will become disrupted by acceleration. As you can imagine the processing to calibrate and convert the temperature values to acceleration is an essential part of the total solution. This device has high vibration immunity and up to 50,000g shock tolerance, specifications mechanical alternatives would be hard pressed to match.

To succeed with any MEMS based intelligent sensor design requires the highest level of integration possible. This applies not only to the design itself, but also to the methodology used to deliver the completed design. Ideally the MEMS and circuit layout should be created in the same environment and then simulated as one.

Mentor’s Tanner tools make it possible to create schematic for the MEMS and circuit together, referencing the appropriate models for each. The MEMS models can be defined using System Model Builder using analytical equations in SPICE or Verilog-A to map the electrical outputs of that portion of the design. The combined schematic can be simulated to verify design functionality and performance. 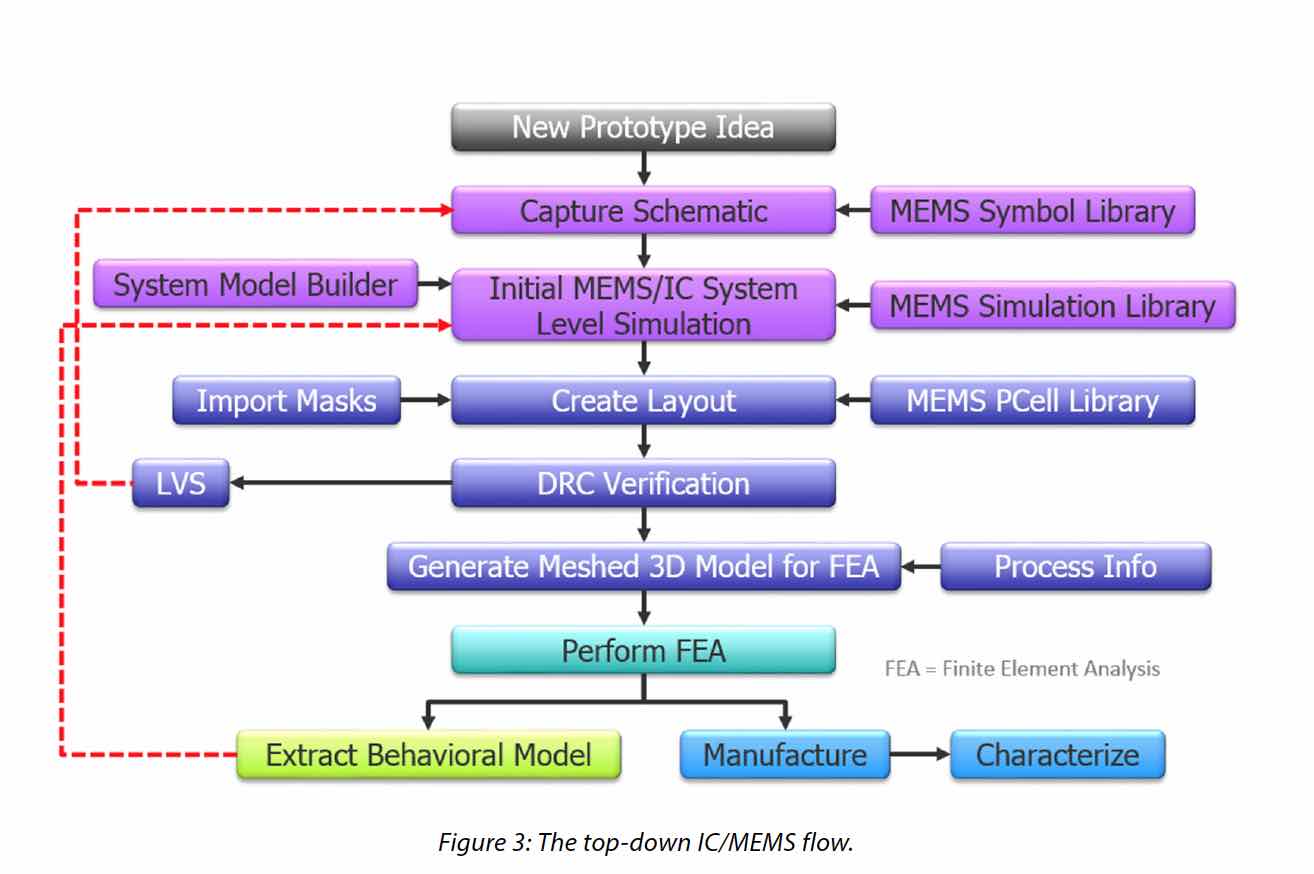 The Mentor white papers I mentioned above describe a flow that enables design and simulation from a common platform. It’s well understood that 3D silicon shapes are derived from the 2D layers created in layout tools. However, for mechanical designs, such as MEMS, people often start with a 3D model. The drawback for MEMS flows is that while you can perform 3D simulation on such a model, it is cumbersome to convert it into a 2D representation suitable for mask preparation. Masks are needed to complete the MEMS fabrication process in just the same way they are needed for semiconductor fabrication.

Mentor’s Tanner tools take a unique approach to solve this dilemma. They have designers start by defining a series of fabrication steps for the MEMS design. Next comes creating the masks in the layout tool, after which the fabrication process can be ‘simulated’ to ensure the resulting structure matches the intended design. At the same time the 3D model created can be exported to 3D modeling tools for that phase of the analysis.

The two white papers from Mentor on the Tanner tools for MEMS based circuits describe the flow more thoroughly. MEMS based IC designs have brought about dramatic innovation in every sector they are used. This goes for drones, to automobiles and even rockets, which all rely on robust and compact sensors. Novel new sensors and applications will continue to become available. The companies that can most efficiently integrate and deliver solutions that use them will be the next round of winners in the ongoing evolution of intelligent sensor based products.

One Reply to “Edge Devices Rely on Intelligent MEMS Based Sensors”