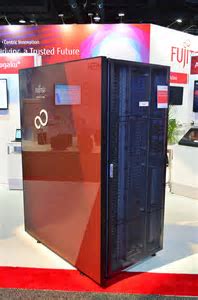 Late last year I wrote about Arm’s efforts to play a role in servers, in AWS, and particularly Arm-based supercomputing, in the Sandia Astra roadmap and in partnering with NVIDIA who are in the Oak Ridge Summit supercomputer. These steps came, at least for me, with an implicit “Good for them, playing a role on the edges of these challenging applications.”

Well they just blew right past that theory. The Fugaku Arm-based supercomputer was just named this year’s fastest in the world. Arm isn’t helping in some peripheral role. Arm cores are the CPUs in this supercomputer. What’s more, Fugaku earlier also topped the list of the world’s most efficient supercomputers.

Fujitsu and RIKEN developed Fugaku jointly, around the Fujitsu A64FX processor. Fujitsu have built these processors around a many-core Arm CPU, with 48 compute cores connected through a NoC, together with either 2 or 4 helper cores. In addition, each processor connects in-package to 32GB of high-bandwidth memory (HBM) supporting streaming memory accesses, also the types of accesses common in AI applications. The processor uses the Arm V8.2A architecture, plus scalable vector extension with a 512-bit vector implementation. One processor alone is a serious machine.

384 of these go in a full rack and there are 396 of those racks in the system, plus a number of half racks. Together these add up to a total of nearly 160k nodes in Fugaku. These interconnect through a torus-architecture network they call TofuD (a neat name for a Japanese supercomputer network).

RIKEN is working with the Japanese Ministry of Education, Culture, Sports, Science and Technology to use Fugaku on a number of projects targeting COVID. One is a project to search for new drug candidates using molecular dynamics modeling to find candidates with a high affinity for the spike proteins on the virus. They are applying this analysis to 2000 existing drug candidates.

A different analysis is looking at the molecular dynamics of the spike protein to find features which may not be experimentally detectable. This is to gain a better understanding of the mechanisms behind connection to ACE2 receptors on cell surfaces.

A third team team plan to model infection in indoor environments through virus droplets . This is with a view to testing possible counter-measures, such as airflow control. I like this simply because it’s an incredibly complex many-body fluidics problem. How else would you model this other than on a monster supercomputer?

Fugaku isn’t the only Arm-based supercomputer on record. HPE/Cray have announced the Cray CS500, based on the Fujitsu A64FX processor. This product provides a Cray programming environment on the system. Already SUNY Stony Brook, DOE Los Alamos National Laboratory and ORNL have signed up for these systems.

No more patronizing Arm in supercomputing. They’re on the leader board and one of their customers is at the top of the leader board. I’ve heard that Cray plans to reclaim that spot next year. Wow!

You can read more about Arms journey in supercomputing HERE and you can learn more about Fugaku HERE.

9 Replies to “Arm Rings the Bell in Supercomputing”