5G will create a fabric of connected devices, one that our world has never seen before. Learn how the semiconductor industry’s ecosystem is going to change, both as a provider and a consumer.

The SEMI Pacific Northwest Chapter invites you to listen to industry leaders who are at the forefront of the 5G wave.

Smart & Connected Devices to Artificial Intelligence and Beyond
by Daniel Payne on 05-02-2017 at 12:00 pm
View Profile
View Forum Posts

Last Friday I attended a breakfast seminar organized by SEMI in Hillsboro, Oregon with fascinating speakers from several high-tech companies: Qorvo, Intel, Oregon Angel Fund, Kimera, Moonshadow Mobile and Yole Development. I recalled that Qorvo was created from the merger of TriQuint Semiconductor and RF Micro Devices back… Read More

I’ve lived and worked in Silicon Valley for 13 years, but since 1995 I’ve been in the Silicon Rainforest (aka Oregon) where the world’s number one semiconductor company Intel, has a large presence, along with dozens of smaller high-tech firms. In the past year I’ve started to attend events organized … Read More 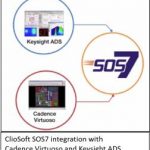 A couple weeks ago I gave a heads-up about a webinar that was being hosted by ClioSoft, Qorvo and Keysight. The topic of the webinar was how to manage custom RF designs across multiple design teams and CAD flows. The webinar was held on February 1st and included presentations by Marcus Ray of Qorvo and Michele Azarian of Keysight.

Over the last several weeks I’ve been having a lot of discussions with colleagues around IP reuse and design data management. This led me to a discussion with Ranjit Adhikary, Marketing Vice President for ClioSoft.