Register / Log In
Guests have limited access.
Join our community today!
You are currently viewing SemiWiki as a guest which gives you limited access to the site. To view blog comments and experience other SemiWiki features you must be a registered member. Registration is fast, simple, and absolutely free so please, join our community today!
Standard Node Trend
by Scotten Jones on 07-15-2017 at 4:00 pm
View Profile
View Forum Posts

At the SPIE Advanced Lithography conference I sat down with Mike Lercel, Director of Strategic Marketing for ASML for an update. ASML also presented several papers at the conference and I attended many of these. In this article, I will discuss my interview with Mike and summarize the ASML presentations.… Read More 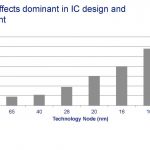 We attended ASML’s analyst day in New York on Halloween. We were very impressed with the quality, content and clarity of the presentations and thought it was one of the best strategic positioning presentations we have seen in the semi industry. We also had an opportunity to meet with several members of senior management after… Read More

ASML reported a quarter that was slightly below expectations coming in at Euro 1.815B in revenues and Euro 0.93 EPS. Orders were a bit soft at Euro 1.4B but well within the normal quarterly variation of a lumpy business. Euro 28M was lost in a currency adjustment associated with the Hermes acquisition.

The guidance for Q4 was between… Read More