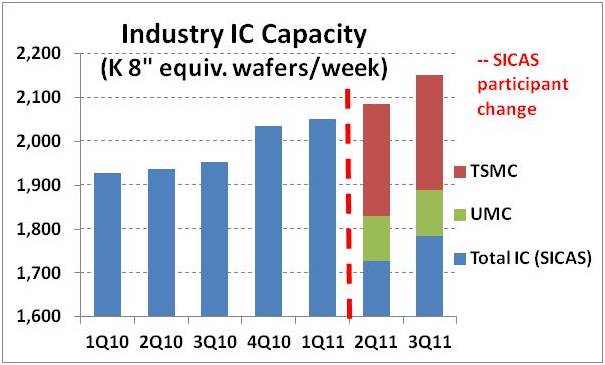 SICAS (Semiconductor Industry Capacity Statistics) has released its 3Q 2011 data, available through the SIA at: SICAS data . Beginning with 2Q 2011 the SICAS membership list no longer includes the Taiwanese companies Nanya Technology, Taiwan Semiconductor Manufacturing Company Ltd. (TSMC) or United Microelectronics Corporation (UMC). TSMC and UMC are the two largest foundries, with 2010 revenues of $13.3 billion and $4.0 billion, respectively. Losing these companies has caused a major disruption in SICAS data and makes comparison of the 2Q 2011 and 3Q 2011 data with previous quarters invalid in most categories. However TSMC and UMC release information on wafer capacity in their quarterly financial releases. Adding the reported TSMC and UMC data to the SICAS data results in total IC data which is more comparable to prior quarters. 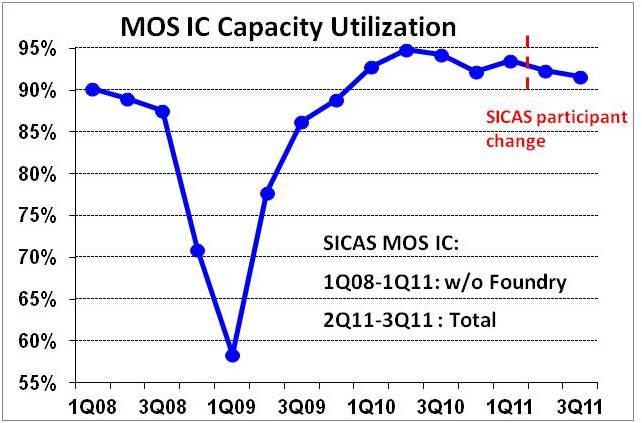 What is the outlook for MOS IC capacity utilization in 4Q 2011 and in 2012? This depends on the rate of capacity increase and the level of shipments. Although capacity has increased for 6 consecutive quarters, signs point to a flattening or possible decline. TSMC expects its 4Q 2011 capacity to be flat with 3Q 2011. The chart below shows three-month-average semiconductor manufacturing equipment bookings and billings from SEMI (U.S. & European companies) and SEAJ (Japanese companies). After a sharp falloff, bookings and billings began to recover in the second half of 2009, leading to capacity increases beginning in 2Q 2010. Bookings peaked in August 2010 and billings peaked in May 2011. October bookings were down 39% from the peak and billings were down 21% from the peak. The equipment data indicates capacity growth should slow down significantly in the next few quarters. 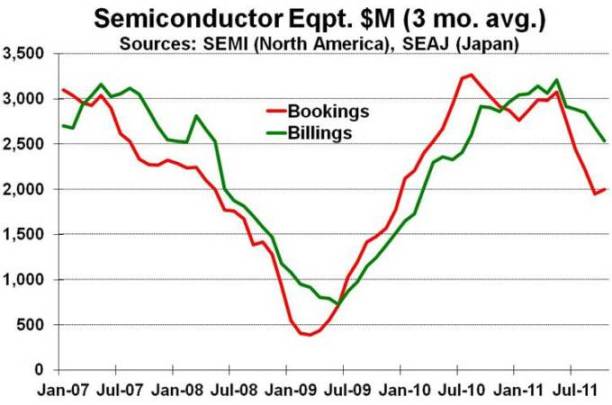 Shipments of IC wafers could be flat to down in 4Q 2011, based on WSTS data and recently lowered revenue guidance from Texas Instruments and Intel. Thus even with close to flat capacity growth in 4Q 2011, MOS IC capacity utilization will like drop from 91.7% in 3Q 2011 to close to 90% in 4Q 2011. In 2012, capacity growth will remain slow for at least the first half of the year. Semiconductor market growth in 2012 (and IC wafer shipments) is expected to be stronger than in 2011. The result should be MOS IC capacity utilization remaining above 90% for at least the first two quarters of 2012.