At our January 2021 industry update webinar, 20 months ago, we forecast “There’s no tight capacity relief before 2022 at the earliest” whilst simultaneously cautioning “Enjoy the super-cycle … it’ll crash in 2023!”  At the time, we were dismissed as being ‘ever optimistic’ for the first prognosis and ‘losing the plot’ for the second. 20 months down the road, both predictions have transpired to have been astutely prescient. 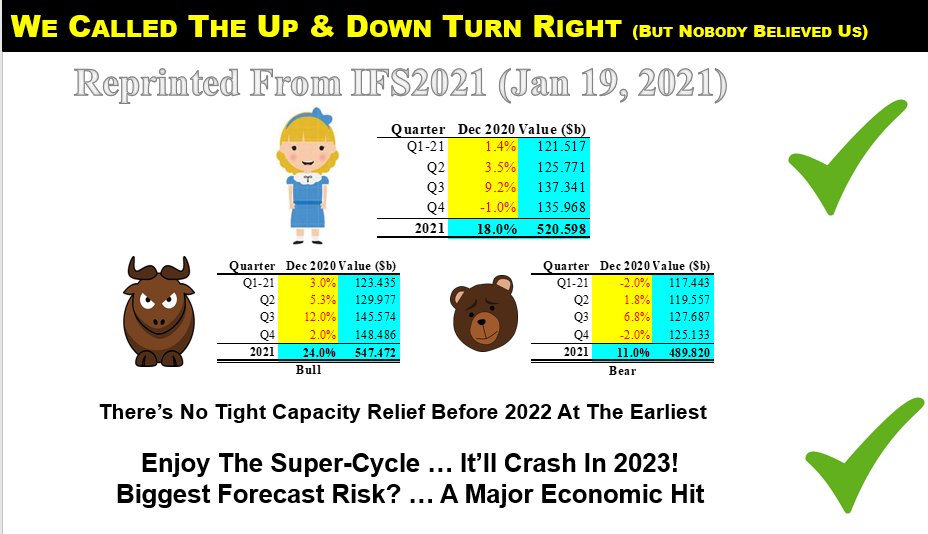 We made those predictions based on our tried and tested methodology of analyzing what we see as the four key driving factors influencing market growth, namely the economy, unit demand, capacity and ASPs, overseen by our 55 years of hands-on experience in the industry.

Just to recap, the economy determines what users can afford to buy; unit demand reflects what users actually buy; capacity determines how much demand can be met; and ASPs set the price units can be sold for.

Twelve months later, at our Jan 2022 update webinar, we forecast 10 percent growth was still possible for 2022, but with a downside of 4 percent and upside of just 14 percent.  Our concerns at that time were that the risks outweighed the opportunities; the chip market was seriously overheating; and the road ahead very stony.  We were especially worried about:

Our over-riding caveat was “When the bubble bursts, it burst, there are no soft landings”.  First unit shipments plummet and then ASPs collapse, with the added word of caution “Don’t be surprised if the market goes negative … it more often does than not.” 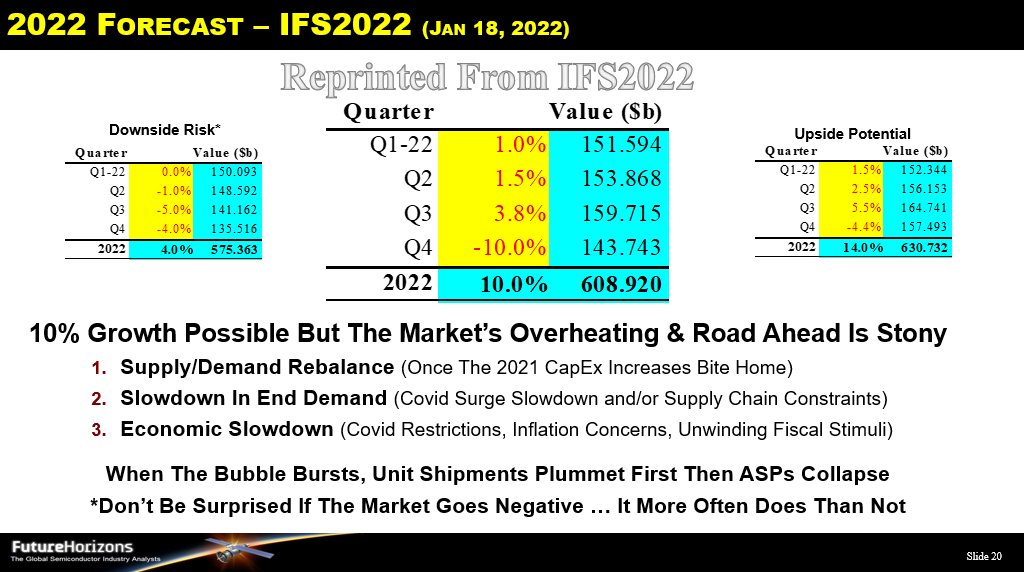 Five months later, at our May update event, despite most firms still reporting stellar first half year sales, we were once again out on a limb, reducing our January 10 percent forecast to just 6 percent, due to concerns about the worsening economic outlook, driven by increased food, energy and gasoline costs wrought by Russia’s war with Ukraine, and its squeeze on consumer spending.  At that time, we reiterated our belief that the downturn would hit in Q3, triggered by the anticipated capacity increases loosening up supply constraints.

The downturn actually broke in June 2022, with a huge implosion in sales driven by a slowdown in unit shipments and an 18 percent fall in ASPs, from Q2’s $1.350 peak to $1.105, wiping out in one month 77 percent of the Super-Cycle’s gain. This pushed our January and May forecasts well into bear territory.

Granted downturns are always uneven and patchy at the start, partly driven by their commodity nature, or not, and partly because there is at least four months’ of WIP production in the wafer fab pipeline which cannot be stopped, but we firmly believe no sector will prove 100 percent immune. As we move towards 2023, the inflation outlook is much worse than we originally believed, in the high double-digit range, with the Fed now having abandoned its ‘soft landing’ goal. Interest rates everywhere, except China, are now poised to rise much faster in response, despite the obvious and clear risk of triggering an economic recession.

At the same time, Russia has now openly declared weaponization of its oil, natural gas, and mineral supplies, especially In Europe, and China’s still aggressive Covid zero tolerance strategy continues to disrupt the global supply chains everywhere. War sanctions on Russia are inevitably also disrupting the global economy and heightened geopolitical tensions with China re Taiwan and the US technology sanctions are also raising the global tension thermometer.

As we entered the third quarter, the chip industry is facing a simultaneous series of global economic shocks coincident with slowdown in market demand. Every single warning light on the economy is now flashing red. Unit shipments are still running about 20 percent above their long-term average and a sharp downward adjustment is inevitable as lead times start to shorten and excess inventory is purged.

CapEx spend, as percentage of semiconductor sales, is at 20-year record high, with the massive 2H-2021 74 percent increased CapEx splurge about to hit home in 2H-2022, just as the market demand turns down. The current ASPs plunge has been driven by memory, but all other sectors are weakening and expected to follow suit in 1H-2023.

We reached the top of the semiconductor Super-Cycle roller-coaster in Q2-2022 and the downward plunge started in June. Sectors in the front are already feeling the impact; for those in the rear? Their start has yet to come. The 17th industry down cycle has now definitely begun.

We have revised our 2022 forecast down to 4 percent growth, but held our 2023 outlook at a 22 percent decline, back to around US$450 billion, and, all things being equal, we should be back to single-digit positive growth in 2024.

Downturns are a structural part of the industry psyche, which is quite natural and normal. They are also a time when longer-term market share gains are best made.

It is also a time when innovation comes to the fore. Firms need to emphasize new products to differentiated from their competitors and invent their way out of the crisis.

Innovation tends to slow during an upturn as foundries and IDMs ration R&D access to scarce wafer fab capacity. The opposite happens in a downturn when fab capacity becomes abundant.

As a result, R&D and new IC design activity always accelerates during a downturn and, as with the past cycles, the downturn beneficiaries will be the IC design houses, EDA industry and leading-edge suppliers.

Does SMIC have 7nm and if so, what does it mean

Samtec is Fueling the AI Revolution