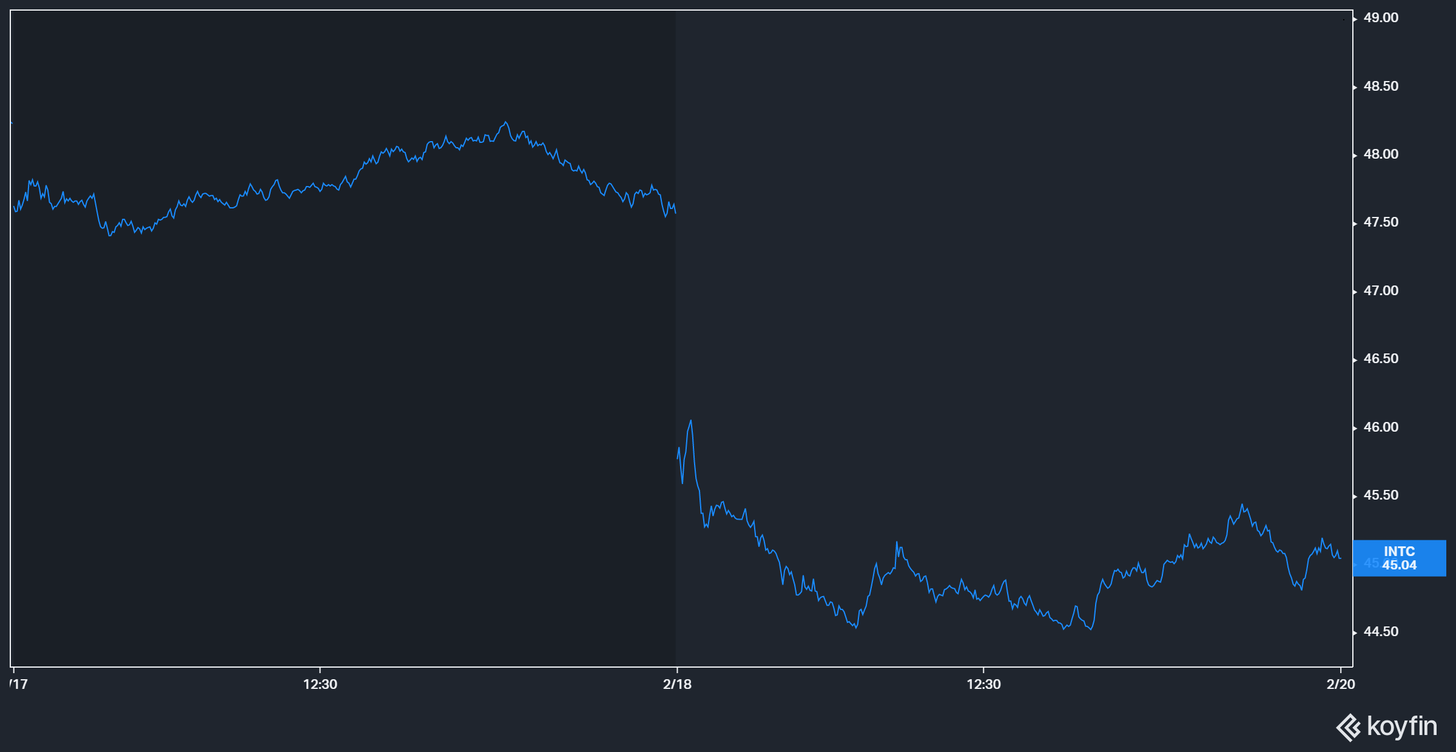 Intel’s big investor day was anything but big. The stock reacted poorly, down 5% on a day that was a widespread sell-off anyways.

I want to briefly summarize what matters for the stock. There was very little incremental news to the technology roadmap, and the financial outlook was underwhelming, to say the least.

They expect to improve gross margins when they get leadership products. They provided this simple bridge. David Zinsner (the new CFO) reiterated multiple times he thinks that this gross margin bridge was conservative.

The real meat of the financial outlook was given in a two-part long-term model. First, is the investment phase model, where they spend heavily to catch up to the industry and bootstrap their foundry business.

And then the longer-term model, when Intel presumably is back in the lead during their fateful 2024 crossover timeline. 2024 is when Pat Gelsinger believes they can take process leadership, and have better revenue growth and margins.

The thing is that the total vision was pretty underwhelming if you ask me. The reason why? Well, it’s consensus already.

One of the things that frustrated me is that I believe that the gross margin and revenue goals from the analyst day were within 50 bps of street consensus until 2025, and this is why the market found this model so particularly uncompelling. This is what we expected already, and stating it again felt pointless. This comment in particular was extremely off-putting as well.

“I want to double the earnings and double the multiple of this company”.

Historically commenting on the multiple is pretty icky if you ask me. Also if you compare it to the historical multiple it feels pretty unlikely. Will Intel really trade at 28x forward earnings?

Trading at 20x forward earnings would put it in a multiple class Intel hasn’t seen since pre-2008. Albeit growing double digits would also be something Intel hasn’t done since 2018 (~13% YoY revenue growth) and hasn’t done for a period of 3 consecutive years in a row since 2003-2005. There has to be a lot fundamentally different for Intel to deserve that doubling in multiple. We will talk about the doubling in earnings a bit.

The thing that also is a bit frustrating is looking at this company on an earnings basis when they guided for 3 years of flat to negative FCF. Here is my model backing out of their long-term guidance.

So while it trades at “just 10x 2024 earnings” it will make no FCF in that year. There is so much implied in the model for the huge technical and financial turnaround in 2024. Everything in the model hinges on 2024 which is a few years away and implies a huge margin acceleration. From 0% FCF margin to 20% in 2 years, this seems unlikely.

The only thing that really made me believe this is possible is if they play the government incentives game really hard. Their initial capex guidance is based on 10% savings from net spend (their guide) to gross.

David Zinser also thinks that a 30% cost reduction number seems like the number they will get and would be “surprised” if Intel didn’t there.

So from my reading of this situation, Intel could hit the FCF number if they bag the entire savings from a 10% cost reduction to a 30% cost reduction, and then improve total EBIT margins by 800 bps. I think at least 1/3rd of the FCF bridge will be driven by playing around with the net and gross capex assumptions. Pretty heroic assumptions, which brings me to the entire crux of the investor day. We are waiting for 2024.

The Intel turnaround is waiting for 2024. We kind of already knew that now we just have financial clarity until that fateful year. The financials were as bad as we expected, and for an Investor day, there was almost no surprise.

Another thing that I keep coming back to is that everyone expects that Intel’s turnaround will mean some drastic and amazing returns for the stock. To be clear if the turnaround happens with no hitches I think that the stock could easily do a 20%+ CAGR to 2026, but I also think that can be said of multiple companies in the semiconductor space at these current prices. I think the problem is that most investors are mentally comparing Intel to their notable competitor: AMD.

I want to be clear, this is not AMD. AMD went from almost no share to meaningful amounts of share and massively improved their economics in that time period. The torque of 10% to 40% share and 20% gross margins to 50% margins will not be repeated. The best case for Intel I think is something that is a 20%+ CAGR, or a rough tripling. That’s a great return! But I want to say this is the BEST CASE and is still contingent on a meaningful amount of execution risk and zero FCF for multiple years along the way. Investor day didn’t really give us much hope other than to wait until 2024.

We are still just waiting for 2024 to see the process leadership be regained.

Also, it looks like the crux of what I said about Tower tipping their hand of Intel becoming a holding company seems true.

The other thing I’ve said is that, “Hey, I’d like to do a Mobileye-like spin on our foundry business at some point as well.” I’m going to keep the structure, as opposed to integrating as much, I’m going to keep it more separate to enable that, which means I’m going to leverage a lot more of Tower and the expertise that it builds over time as part of it.

Ala the venerable Stratechery.

The screenshots from above are from a very simplistic model that I used to replicate the investor day goals. It is behind the paywall for paying subscribers only. Feel free to mess with the assumptions yourself. The FCF part of the model is disconnected from earnings, mostly because of how meaningful the D&A cost ramp will be for the next few years.

The Rising Tide of Semiconductor Cost

TSMC Earnings – The Handoff from Mobile to HPC