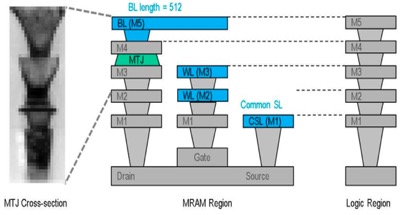 TSMC’s embedded Spin-Torque Transfer Magnetic Random Access Memory (STT-MRAM) offers significant advantages compared to Flash Non-Volatile Memory (NVM).  Flash requires 12 or more extra masks, is implemented in the silicon substrate and is page mode write alterable.  STT-MRAM on the other hand is implemented in the Back-End-Of-Line (BEOL) metallization as shown in Fig. 1, requires only 2-5 extra masks and is byte-alterable.

This implementation in TSMC’s 22nm Ultra-Low-Leakage (ULL) CMOS process has a very high read speed of 10ns, and read power of 0.8mA/MHz-bit. It has 100K cycle write endurance for 32Mb code and 1M cycle endurance for 1Mb data. It supports data retention for IR reflow at 260C of 90 seconds and 10 years data retention at 150C.  It is implemented in a  very small 1transistor-1resistor (1T1R) 0.046 mm2 bit cell and has a very low leakage current of 55mA at 25C for the 32Mb array equivalent to 1.7E-12A/bit when in Low Power Standby Mode (LPSM).  It utilizes a sensing scheme with per-sense amp trimming and 1T4R reference cell. 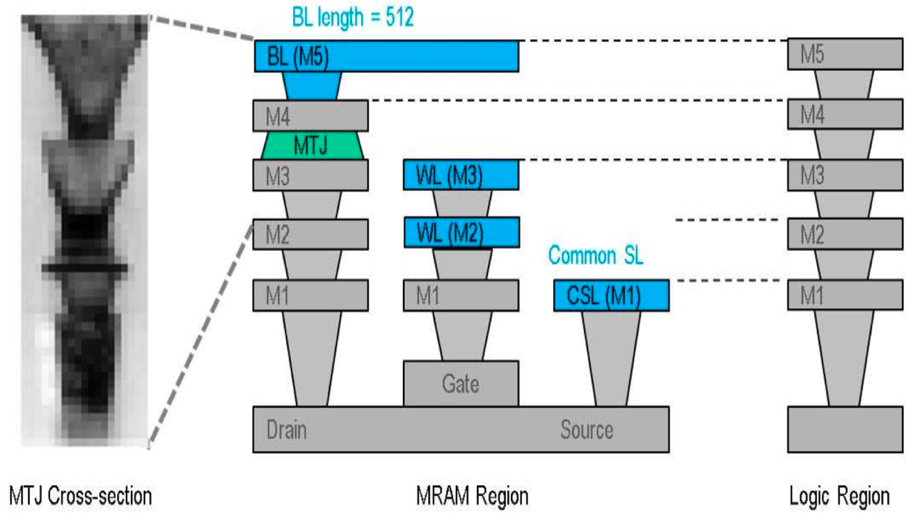 Fig. 1. Cross-section of the STT-MRAM bit cell in BEOL metallization layers between M1 and M5. 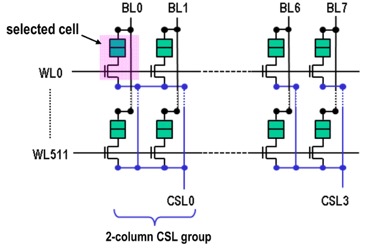 The word line is over-driven by a charge pump to provide sufficient switching current of hundred’s of mA for write operation requiring the unselected bit lines to be biased at a “write-inhibit voltage” (VINHIBIT) to prevent excess voltage stress on the access transistors of the  unselected columns of the selected row. To reduce bit line leakage of the access transistor on unselected word lines, the word line has a negative voltage bias (VNEG). The biasing of the array structure for reading, write-0 and write-1 is shown in Fig. 3. 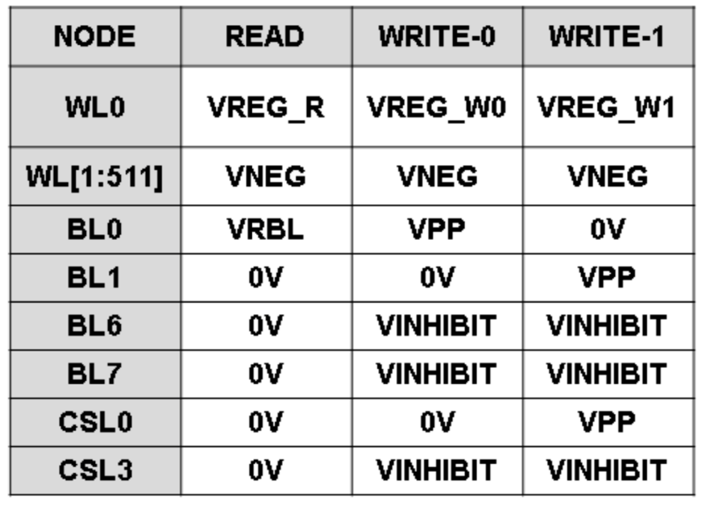 3.  Read Operation, Sense Amplifier and Word-Line Voltage System
For fast, low-energy wake-up from LPSM to enable high-speed read access, a fine-grained power gating circuit (one per 128 rows) with a two-step wakeup is used as shown in Fig. 4.  The power switch consists of two switches, one for the chip power supply VDD and the other for a regulated voltage from the Low Drop-Out (LDO) regulator supplying VREG.  The VDD switch is turned on first to pre-charge the WL driver’s power rail, then the VREG switch is turned on to raise the level to the targeted level, which achieves fast wake-up of <100ns while minimizing the transient current from VREG LDO. 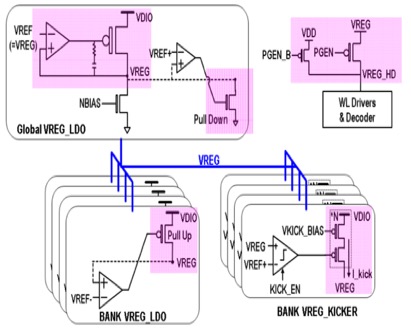 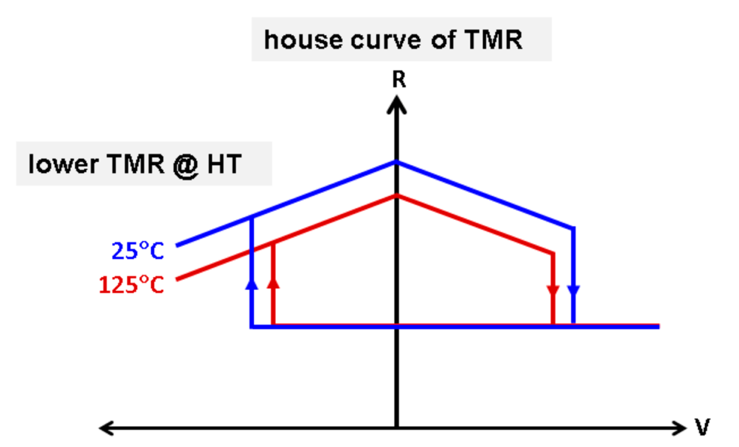 Fig. 5 House curve of TMR showing the reduced window for read at 125C

The resistance distributions of the Rap and the Rp  states which, when including the bitline metal resistance and the access transistor resistance, determine the total read-path resistance showing the proportional reduction in the difference between the two states which the sense amp needs to measure to determine the bit value, as shown in Fig. 6. 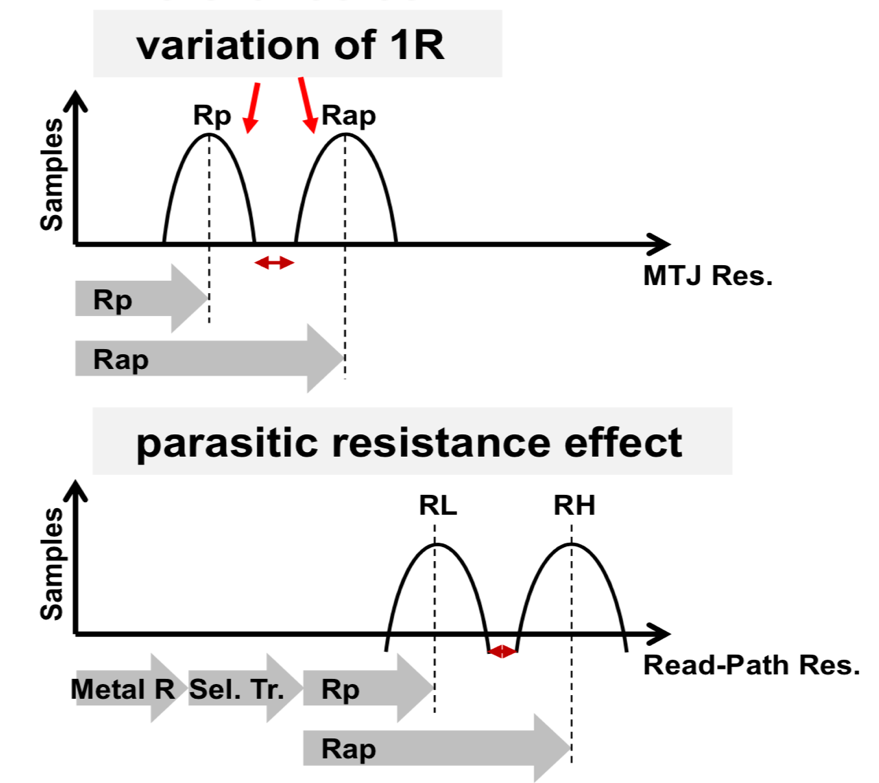 Fig. 6. Distribution of resistance values for the anti-parallel Rap and the parallel Rp states and including the metal bit line and access transistor resistances showing the proportional reduction in the difference between the two states that needs to be detected by the sense amp.

To sense the resistance of the MTJ, the voltage across it during read must be clamped by transistors N1 and N2 to a low value to avoid read-disturb  and is trimmed to cancel the sense amp and reference current offset. The reference resistance is formed by the 1T4R configuration  R~(Rp +Rap)/2  + R1T as shown in Fig. 7. 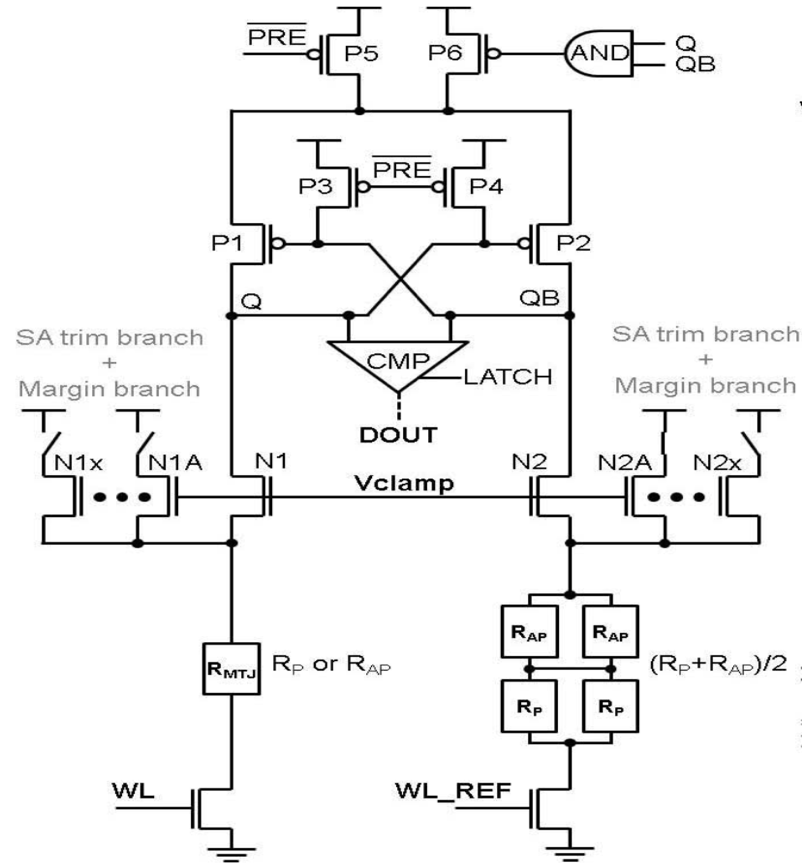 This configuration is able to achieve a read speed of less than 10ns at 125C as shown in the sensing timing diagram and shmoo plot Fig. 8. 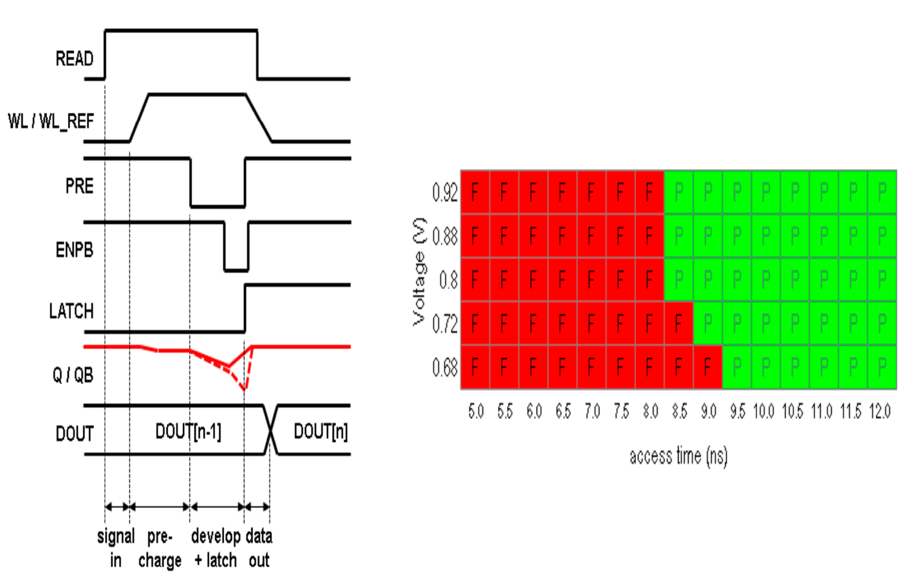 4.  MRAM write operation
MRAM write of the parallel low resistance state, Rp and the higher resistance anti-parallel state Rap requires bi-directional write operation shown in Fig. 9. To write the Rap state to the Rp requires biasing the Bl to VPP, the WL to VREG_W0 and the SL to 0 to write the 0 state.    To write the 1 state, writing the Rp  state  to the Rap  state  requires current in the other direction, with the BL at  0, the SL at VPP and the WL at VREG_W1. 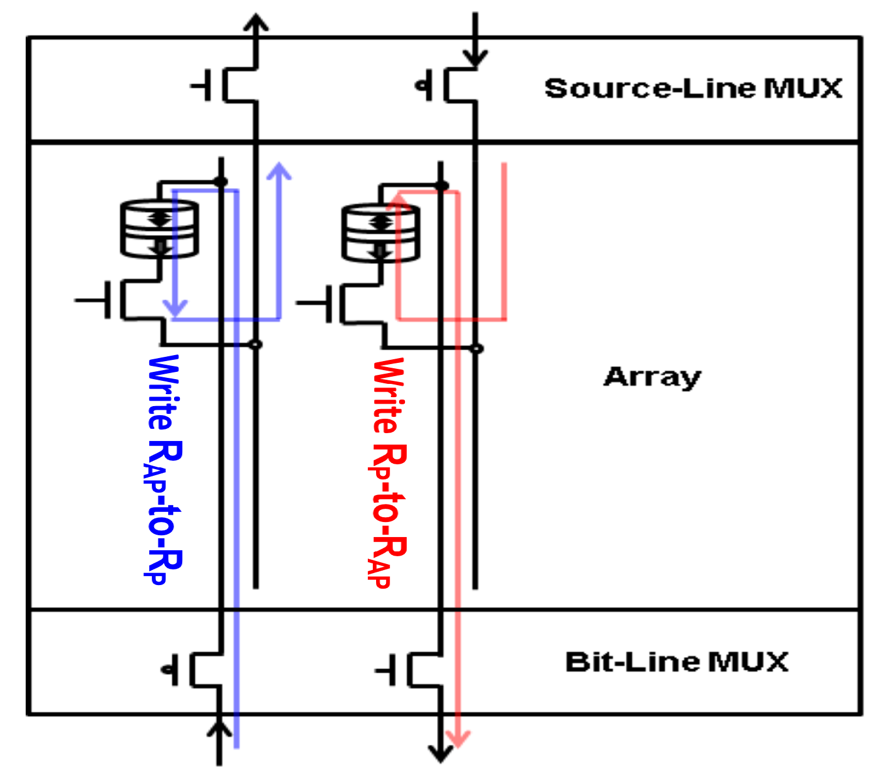 For data retention during IR reflow at 260C for 90sec, an MTJ with a high energy barrier Eb is needed. This requires an increase in the MTJ switching current to hundreds of mA needed for reliable writing.  The write voltage is temperature compensated and a charge pump generates a positive voltage for selected cells and a negative voltage for unselected word lines to suppress bit line leakage at high temperatures. The write voltage system is shown in Fig. 10. 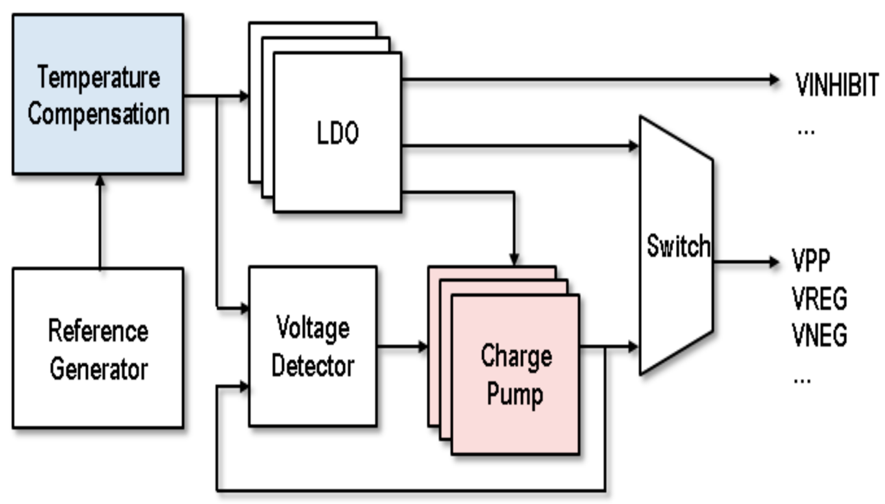 Fig. 10 Showing the over-drive of the WL and BL/SL by the charge pump and the temperature compensated write bias

Temperature compensation for write voltage is required for operation with a wide temperature range.  The write voltage shmoos from -40C to 125C are shown in Fig. 11 where the F/P blocks show fail at -40C while passing at 125C. 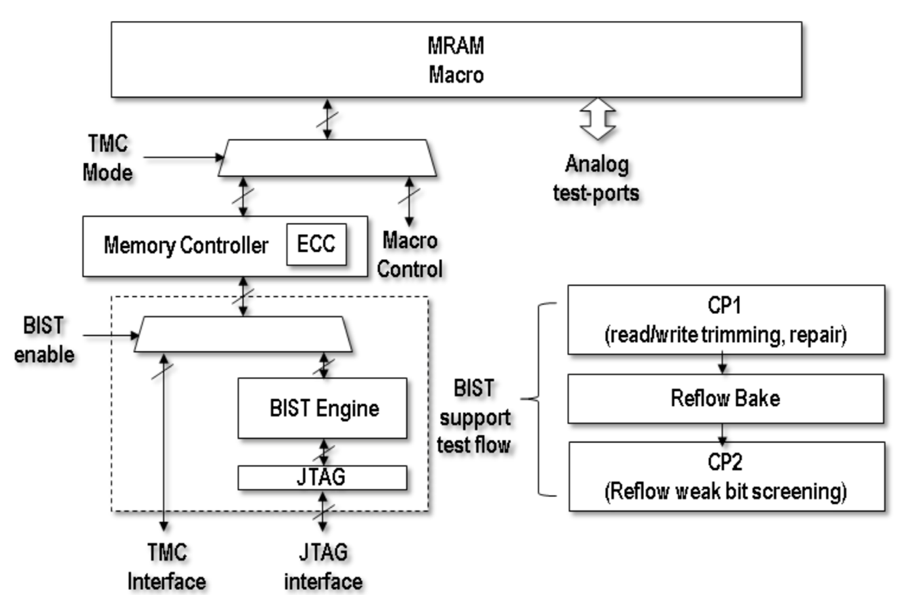 Fig. 12. BIST and Controller for self-repair and self-trimming during test and implementing DECECC.

The TMC implements the smart write algorithm which implements bias setup and verify/retry time for high write endurance (>1M cycles). It contains read-before-write to decide which bits need to be written and dynamic group-write to improve write throughput, multi-pulse write with write verify and optimizes write voltage for high endurance. The algorithm is shown in Fig. 13. 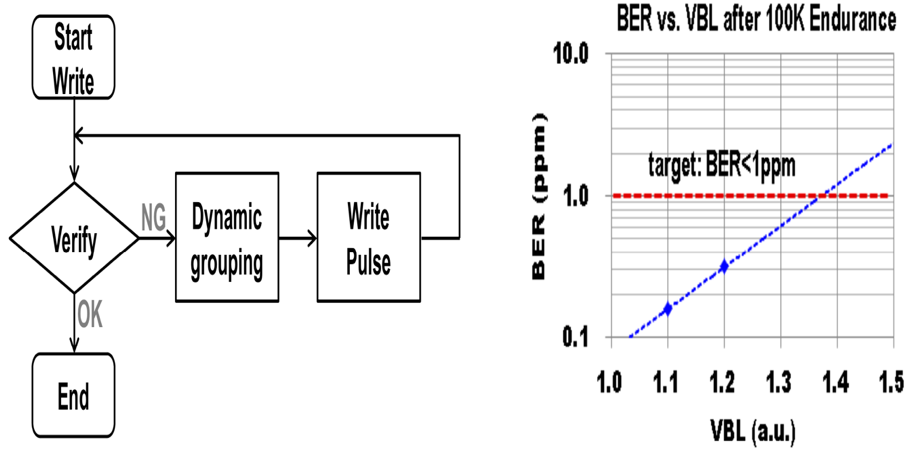 Fig. 14.  The write endurance test shows that the 32Mb chip access times and the read currents are stable before and after 100K -40C write cycles. 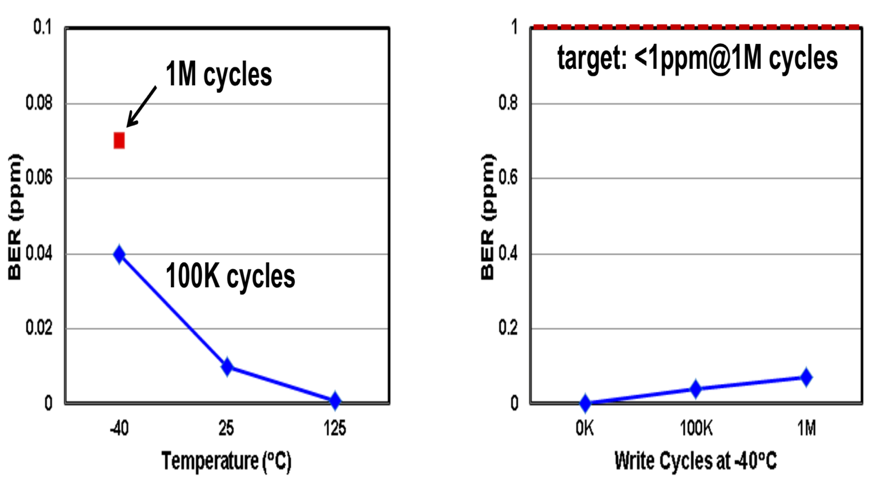 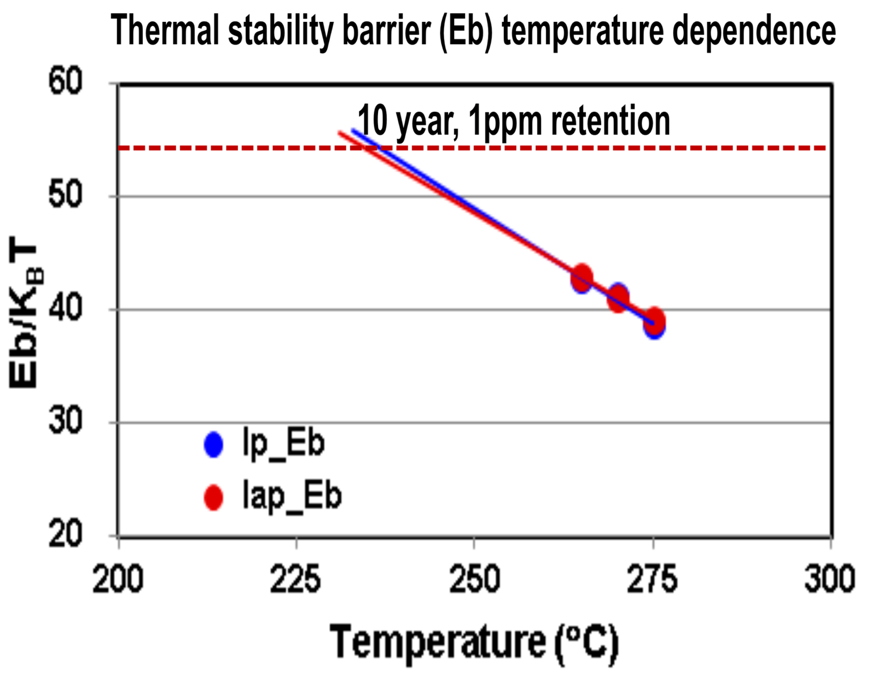 Magnetic field interference is a potential concern in many applications for spin-based STT-MRAM. The solution is a 0.3mm thick magnetic shield deposited on the package as shown in Fig. 16 showing that in a field strength of 3500Oe of a commercial wireless charger for mobile devices the bit error rate of 100 hour exposure can be reduced from >1E6ppm to ~1ppm. Also, more than 10 years of data retention at 125C was shown at a magnetic field of 650 Oe. 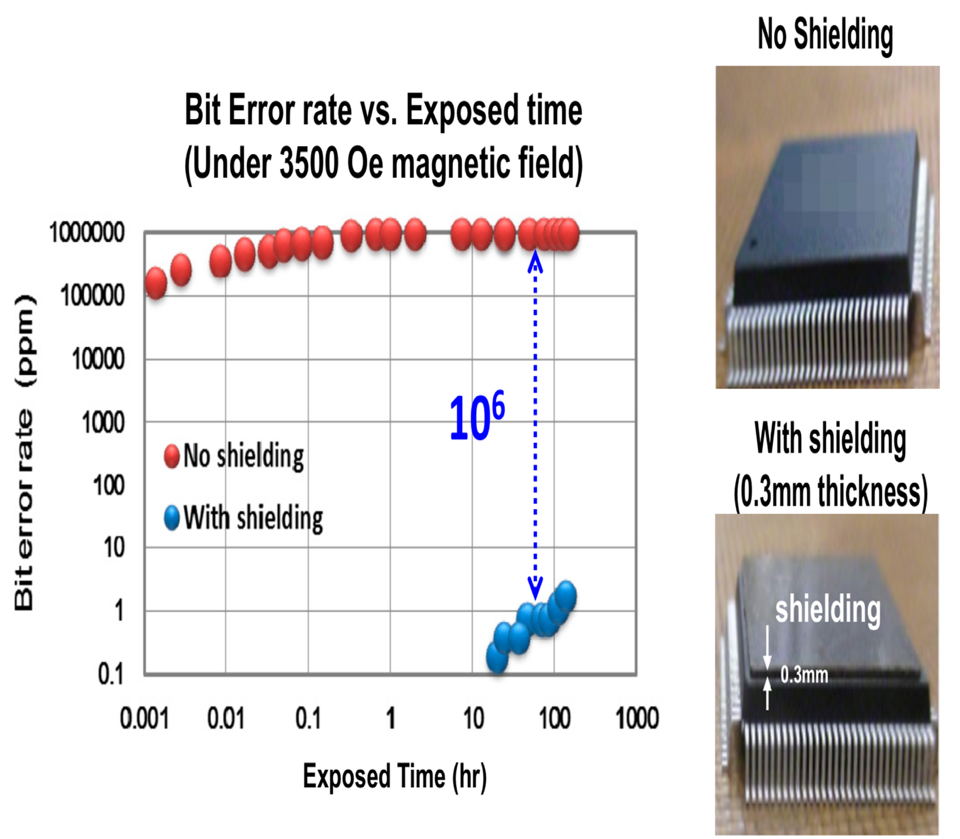 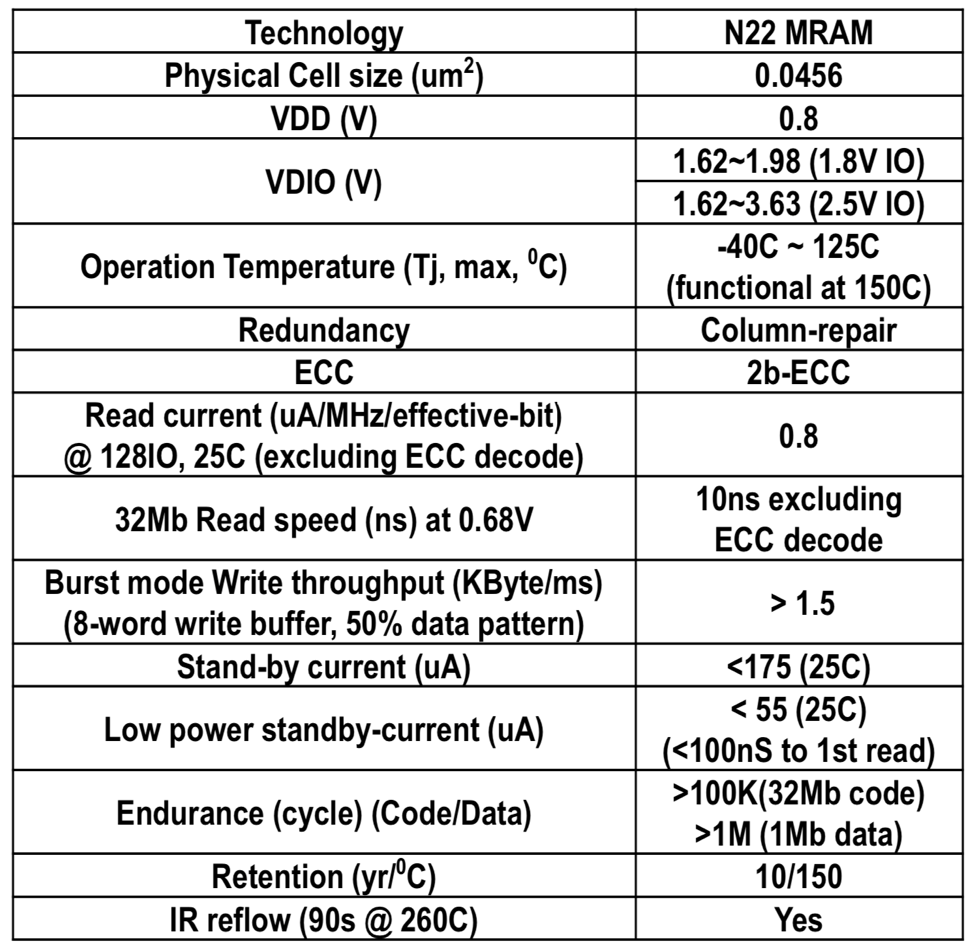 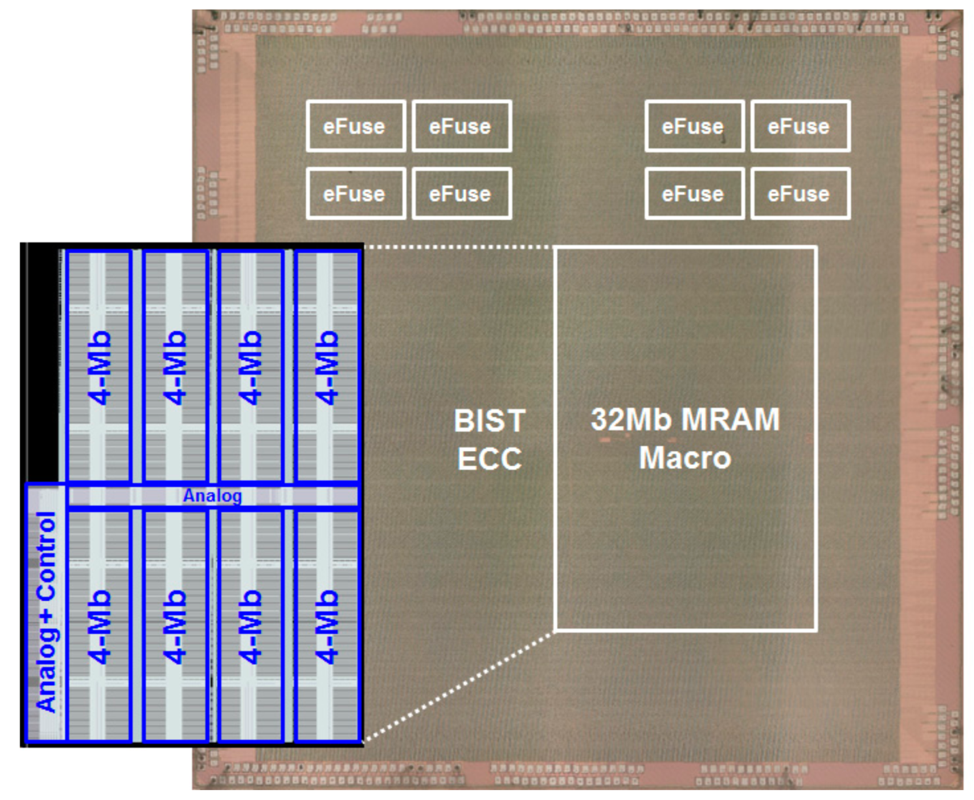