In a previous article [1], the Rayleigh criterion was mentioned as the resolution limit for the distance between two features. On the other hand, in a following article [2], the minimum pitch was mentioned for the resolution limit for arrayed features. In this article, we reconcile the two by considering gaps between arrayed features, for example, between a minimum pitch line end and the edge of a perpendicular line.

The number of features that can fit into the pitch equals the number of spatial harmonic intervals (=wavelength/pitch) that are passed by the numerical aperture (NA) of the optical system. If 5 spatial harmonics, or diffraction orders beyond the zeroth, are passed, then five intensity peaks emerge, indicating a minimum feature size of one-fifth the pitch (Figure 1). 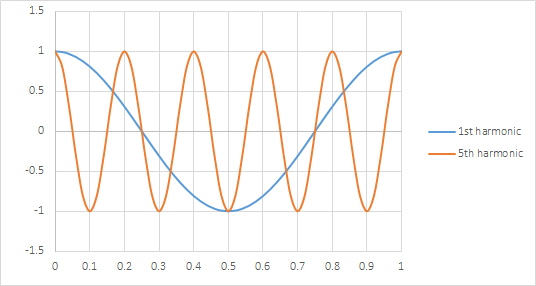 Figure 1. The fundamental (1st harmonic) only generates one feature per pitch, while the fifth harmonic generates five.

Figure 2. Left: The optimum illumination for a given pitch between vertical lines will arrange to have the diffraction orders at equal horizontal distances from the center, while allowing a number to spread out vertically. The circle represents the numerical aperture which will cut off diffraction orders which fall outside. Center: Top view of aerial image of a rectangle between horizontal lines. The cut line aerial image (right) from the center cutline shows the gap where intensity drops is roughly 1/5 the vertical pitch, as expected from the number of included diffraction order intervals.

This is calculated for a range of minimum pitches and cross-pitches and plotted in Figure 3.

In fact, the lower limit of gap size can be calculated exactly if the minimum line pitch is at most wavelength/NA. It is sqrt(3)/3 * wavelength/NA. The proof is given in the Appendix.

Shrinking the gap below k1=0.6

An interesting effect is predicted when the gap is smaller than 0.6 wavelength/NA. It appears as if less light is absorbed or transmitted (reflected for EUV case) by the shrinking feature. This can lead to resist scumming for example [4]. This can be understood by considering the amplitudes of the harmonics (Figure 4).

Figure 4. The amplitudes of the spatial harmonics (diffraction orders) which are not cut off by the numerical aperture all decrease when the gap size falls below 0.6 wavelength/NA (k1=0.6), but above this size, the higher harmonics decrease while the lower ones increase.

The gap between line end and perpendicular line edge can also be reduced below ~0.6 wavelength/NA by spacer patterning within an initially wider starting gap (Figure 5). This approach is also known as spacer-is-dielectric self-aligned double patterning (SID SADP) [7].

The lithography resolution limits are now summarized as follows:

The starting point here is that for a minimum pitch p <= wavelength/NA (dense line k1<=0.5), the illumination will first produce the diffraction order distribution shown on the left in Figure 2. In terms of spatial frequency coordinates, this means the x-coordinates are +/- 0.5 wavelength/p. Here we express the y-pitch as a multiple of the minimum pitch, i.e., np. The diffraction order interval is therefore wavelength/p/n. The number of such intervals which fit within the numerical aperture NA is therefore given by

The estimated gap size is therefore

Since p lies within the range 0.5-1 wavelength/NA, the minimum gap size occurs for p = wavelength/NA, giving a gap size of 1/sqrt(3) wavelength/NA = sqrt(3)/3 wavelength/NA ~ 0.58 wavelength/NA (Figure 6). Note that this is larger than the nominal line spacing (k1<=0.5). So, for connections to the next layer that must not exceed k1=0.5, the gap must be printed with a cut mask.

Figure 6. Gap size vs. line pitch, where both are normalized to wavelength/NA (k1=dimension/(wavelength/NA)).