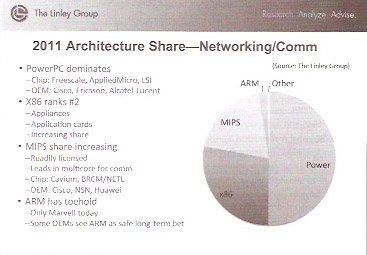 I was at the Linley Processor Conference yesterday. There are two of these each year, one focused on mobile and this one, focused on networking and communications (so routers, base-stations and the like). You probably know that ARM is pretty dominant in mobile handsets (and Intel is trying to get a toe-hold although I’m skeptical they will succeed). A story that I haven’t heard before is their potential in the networking and communications space.

So if you look at the architecture share pie chart you can see that PowerPC has the strongest position with about 50% market share, heavily used by Cisco, Ericsson and Alcatel-Lucent. Next is x86 which is not heavily used in routers but in various network appliances that are more like a PC in a box with network connectivity. MIPS is, apparently (and suprisingly) increasing its share and leads in multicore, in use at Cavium, Broadcom/Netlogic, Nokia-Siemens, Huawei (and some Cisco). ARM has a toe-hold and is only used at Marvell today.

So that doesn’t look like much of a story. ARM is a nobody, the other guys together have 95% market share.

But ARM has developed a 64-bit architecture and that has opened new markets at the higher end. There is potential for ARM-based servers replacing general purpose PC-servers in specialized datacenters. If you are Netflix and all you do is pump video then a general purpose PC may not be the most power/cost effective way to do that. Or uploading billions of photos to Facebook. But the jury is still out as to whether that might happen.

But these dual architecture strategies are expensive both to build and verify the CPU cores and also to maintain the software on two architectures. So Linley’s prediction is that it won’t endure and there is a good chance that the migration will take place to ARM although it may take more than 5 years. ARM is seen as a safe choice. MIPS has been up for sale for most of the year and whether they can continue to make the engineering investment to remain competitive for the long term has to be in doubt. PowerPC, which originally was a joint development with Apple, Freescale (then still part of Motorola) and IBM, seems also to be gradually losing support. Apple has gone, of course. IBM is still committed to the architecture but really only for their own high-end servers.

x86, of course, is also a safe choice but Intel’s roadmap is driven by the PC and so it tends to require a higher chip-count to build a high-data throughput platform for communications. The requirements for routers and base-stations are very different from general purpose PCs since they have very different latency and data-plane requirements. 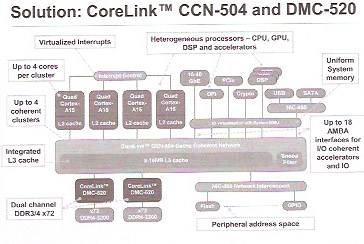 During the day, ARM announced two new products CoreLink CCN-504 (CCN is cache-coherent network) which is an ARM-specific network-on-chip (NoC) and CoreLink DMC-520 dynamic memory controller. These two products work together to provide on-chip and off-chip connectivity with a real-world throughput of 1Tbps and peak performance of 1.5Tbps using a 128-bit internal bus. There is support for the existing Cortex-A15 (32 bit) and future 64-bit ARMv8 architecture cores. As always, ARM is focused on power-efficiency and not just raw performance at any cost. These will be available early next year with the first production designs expected in 2014. LSI discussed some work based on CCN-504 where they have been partnering with ARM on interconnect technology requirements, although they didn’t announce any specific products.

So ARM today has pretty much zero market share in communications (outside of mobile, where they are dominant). But they have new technology for the space from 64-bit processor cores to on-chip NoC technology that can link up to 16 cores, and high performance access to off-chip memory. And several of the big players in the networking/communication spaces have ARM-based products that they will bring to market in the near future. The landscape could look very different in two or three years.

2 Replies to “ARM in Networking/Communications”