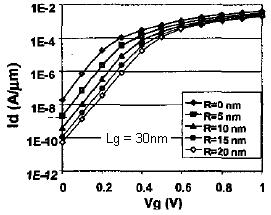 The preceding two Semiwiki articles in this thread provided an overview to the FinFET structure and fabrication. The next three articles will discuss some of the unique modeling requirements and design constraints that FinFET’s introduce, compared to planar FET technology.

Recently, the Compact Model Council approved the standardization of the BSIM-CMG FinFET model, based upon the outstanding work from the Spice team at UC-Berkeley. I would encourage SemiWiki readers interested in FinFET’s to read the documentation on the BSIM-CMG model:

In particular, note that parallel fins are represented in the BSIM-CMG model using a parameter “NFINS = n” – that will have implications in modeling device parasitics and in CAD flows.

This brief discussion of device behavior will be divided into three sections: (1) the subthreshold “off” leakage current (Ioff); (2) the active current; and, (3) the factors that will introduce variation into the device behavior.