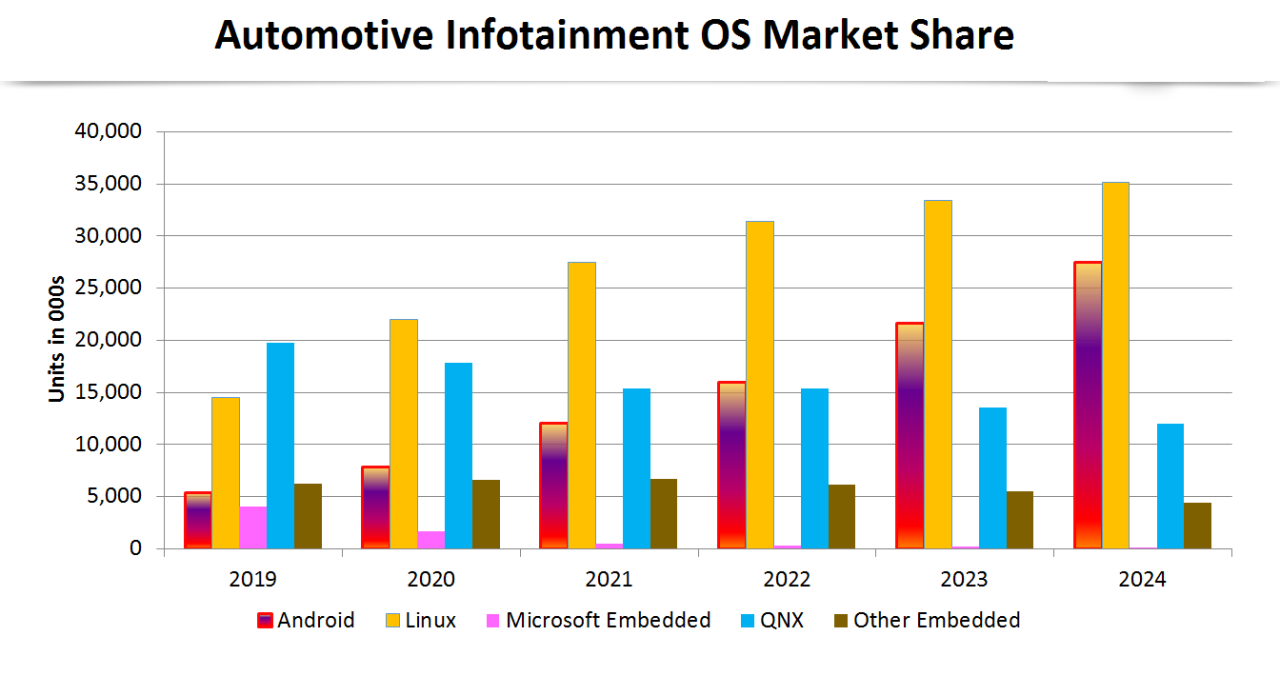 Google’s Head of Android Auto Partnerships, Jens Bussman, joined me on stage last week in Munich at TU-Auto Europe to discuss Google’s progress and priorities in the global connected car market. The standing-room-only audience was treated to an overview of Google’s plans and some clarifications regarding its different assets being adopted across the industry.

Bussman, first of all, made clear that Google’s top priority was the ongoing proliferation of its Android Auto smartphone mirroring solution. This focus on Android Auto might have seemed surprising given recent announcements of imminent OEM adoption of Google Automotive Services (GAS) by Volvo Cars, Renault and General Motors. But Android Auto is where most of the current action lies for Google.

Bussman claimed a 98% adoption rate for Android Auto (for car companies and new cars shipped outside China, where Android Auto is not available). Given the fact that only BMW, Porsche, Lexus, and Infiniti have yet to adopt Android Auto, that 98% figure might be a smidgeon high. Of course, the figure is a moving target – moving toward 100% – as BMW (speaking later at the event) acknowledged its plans to eventually offer Android Auto and Nissan’s Infiniti has announced its own plans to make both Android Auto and CarPlay standard on its next generation infotainment systems shipping in 2020.

Android Auto has emerged as a convenient entry point for new connected car apps looking for the broadest possible multiple-OEM implementation. Bussman did acknowledge, though, that the growing roster of applications within Android Auto may ultimately pose a usability challenge.

Bussman noted that adoption of the Android operating system is Google’s second priority in the automotive industry. About a decade in to the process of introducing Android into in-dash infotainment systems, Android version Q now addresses a wide range of automotive usability issues ranging from multiple screens and hardware controllers to memory and power management.

Google has listened carefully to and collaborated closely with car makers and Tier 1 suppliers to overcome the operating system’s inherent shortcomings for automotive implementation. Bussman and I discussed the crowd-sourced approach associated with Linux versus Google’s more vertically-oriented and orchestrated modifications which tend to follow a regular annual cadence of updates.

Strategy Analytics anticipates a massive industry shift to Android OS adoption in infotainment systems that is now underway – as the industry shifts from Linux – now at its peak – to Android. Bussman acknowledged that Google has no plans to promote the use of Android for safety related systems, a proposition currently being explored by Linux proponents.

The shift in adoption momentum from Linux to Android reflects the gravitational pull of the massive and growing Android developer community and the growing perception of Android as a lower cost development option. It is the evolving cost advantage that is expected to win the day, OEMs say.

Perhaps most notable of all was Google’s third priority attributed to Google Automotive Services – the full portfolio of Google Services including Google Assistant, Google Maps, Google Places, and Search. Some industry observers see Google’s introduction of GAS into vehicle dashboards as the final straw via which Google takes control of OEM customers and their vehicle buying and usage decisions.

Bussman dispelled the notion that the implementation of GAS would represent a Google take over – in fact emphasizing the fact that Google is not in the user interface business per se and that car makers are free to create their own user interfaces. This is in contrast, of course, with Android Auto which has its own specific interface.

Other points of clarification from Bussman included the fact that Google Assistant is only intended for use with GAS, and that GAS has a standard license fee that is not contingent on the amount of data shared with Google by an OEM.  Bussman’s description of GAS implementations suggested that OE’s would preserve their platform development and deployment responsibility – suggesting that Google will have a Tier 2 role – but it is hard to see Google as a Tier 2 supplier.

One thing appears clear is that Google has formally emerged as an automotive Tier 1, coordinating and integrating in-vehicle content. Given the fact that Google is only supporting its operating system and platform for four years vs. the much longer periods of time normally insisted on by auto makers, it is likely that Google will not be displacing the current supplier eco-system which is more accustomed to accommodating standard auto industry practices.

The bottom line is that the proliferation of car connectivity has created a warm welcoming environment for Google, Android Auto, Android, and GAS. With software and services that require connectivity for regular updates and access to resources, Google may be the chief beneficiary of the connected car.

FOG – Fear of Google – remains a pervasive industry mood. But Bussman did his best to dispel the boogie-man reputation of the Mountainview Monster. Post-discussion conversations with TU-Auto Europe attendees suggests that a lingering sense of forboding remains.