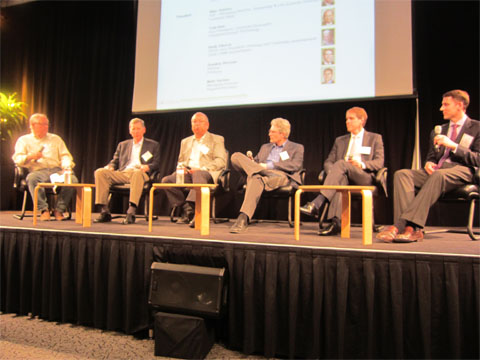 GSA Entrepreneurship: Getting Money In and Out
by Paul McLellan on 07-19-2013 at 1:32 am
View Profile
View Forum Posts

This afternoon and evening I was at GSA’s entrepreneurship conference at the Computer History Museum. The first two panel sessions were essentially on getting money into companies to get them started (or growing them), and getting money out when you have built the business.

The first session was officially titled Fueling Success and Innovation with panelists:

Gunjeet opened by talking about what turned out to be the theme of the session: investment in semiconductor companies continues to fall, driven by lack of IPOs and consequent lower M&A valuations. Need to think about strategics since that’s where the money is. Strategics are companies in the ecosystem that have other reasons than financial for investing, like half the panel.

Shankar said Samsung has created a strategy and innovation center in Menlo Park with $100M fun to invest in core technology. There is a big capital cap for core technology since VCs stay away from anything requring time and too much capital.

Amer of Cavium echoed the strategic message. They are the alternatives for funding GSA’s cap lite group has just put together a list of strategics willing to take your call.

Keith didn’t have a cake but it was Intel’s 45th birthday today. Intel has been the largest strategic for 20 years, having invested over $10B with over 600 exits. There is lots of innovation but not so much in the traditional ASSP/component business. Materials, EDA, IP. Strategics can now add more value that traditional VCs. And the other way around so don’t forget to emphasis the non-financial aspects to a strategic investment.

SKTA decided to get into the business since they noticed a fundamental shift in semi, which is now much closer to equipment and materials companies with the complexity of modern processes. They help find a strategic match with a goal to reinvigorating the semi funding model.

George of Tallwood said the old days are gone, you can’t do it any more the way you could. Chips & Technology were making more money in a PC than Intel after just 2 years of development at a $6-800M run rate. Only mobile is big enough and growing enough but you think you will just displace Qualcomm, not going to happen. Semconducor industry is mature (almost nobody in the room was under 40). It is not just returns for semi IPOs that are not there, VC overall has worse returns in the last 10 years than investing in public markets. But he is worried that semi will go the way of EDA where innovation can only now be done in an exceptionally capital efficient way, and he doesn’t think that works for semi. Development can be done better but it still costs real money.

Gujeet had a ray of hope that exit valuations are going up if the company is build in a capital efficient manner. There is chance that the Jobs act will make smaller IPOs possible again versus the mess that Sarbanes-Oxley made of the market.

Steve set the scene (well, the same scene as the first session): ther won’t be many IPOs, mostly M&A. Semi is in consolidation.

Alan of Comerica pointed out that there are lots of companies with lots of cash. A big part of their valuation is their cash and they don’t make any real money on cash so acquiring companies is one way to create a better return.

So why acquire? Tom pointed out that the two main reasons were to fill a hole in the companies product or technology portfolio, but sometimes to roll-up a market segment. So don’t be afraid to approach competitors.

Andy from Qualcomm said they do acquisition mainly by identifying future needs and working to fill them. Sometimes that means internal development, but sometimes acquisition. They also look for opportunities to expand into adjacent categories. They don’t do acquisitions just to get their hands on patents although they expect companies to have good protection on their unique ideas. Patents are table stakes not something that affects valuation.

Stanley talked about what can go wrong. Firstly, he said, make sure to talk to your advisers, bankers and lawyers and drill down into the business term before you get into exclusivity (when you sign some sort of no-shop agreement). Your leverage afterwards is a lot less. The rest is good housekeeping, making sure your investment and customer contracts are good and so on. He also pointed out that although not usually a legal agreement, mergers are often problematic if the core team doesn’t stay with the business, at least at first.

What about strategic investors? Matt of Pagemill said they can be very positive but if they are a competitor of the acquirer it can be a problem. The biggest issue is technology partnerships that can’t be unwound and have not been structured to keep the core IP in the company for the benefit of any acquirer.

Matt talked about the best things you can do to structure deals? Firstly, series A under corporate law gets a separate vote so you ideally want to make sure that a strategic investor doesn’t have veto rights on any acquisition by proxy nomination terms or bringing in financial investors into the round too. Strategics typically don’t want a board seat, just board observer, so don’t be afraid to close the session and exclude them to discuss sensitive customers (e.g. competitors of the investor). One thing that will come up with a strategic investment is notice rights (effectively a first refusal on M&A). You don’t want to have to restrict yourself by having to reveal bidders and price to your investor, will reduce valuation (or scupper the deal). Try and settle for blind notice (you have to tell the investor that the company has received an offer but not have to declare who or how much, so if they want to bid too it is a normal competitive bidding situation).

Andy said that the biggest problem he sees is if the investor has an unfair business advantage and is a competitor of, in this case Qualcomm, and can wreck the attractiveness of a deal.

Tom pointed out that companies are bought not sold. So you should always be socializing with potential buyers at all times since you never know when a company may want to make a move. May be early to get technology, may be late to get into a market where the acquirer has fallen behind.

0 Replies to “GSA Entrepreneurship: Getting Money In and Out”