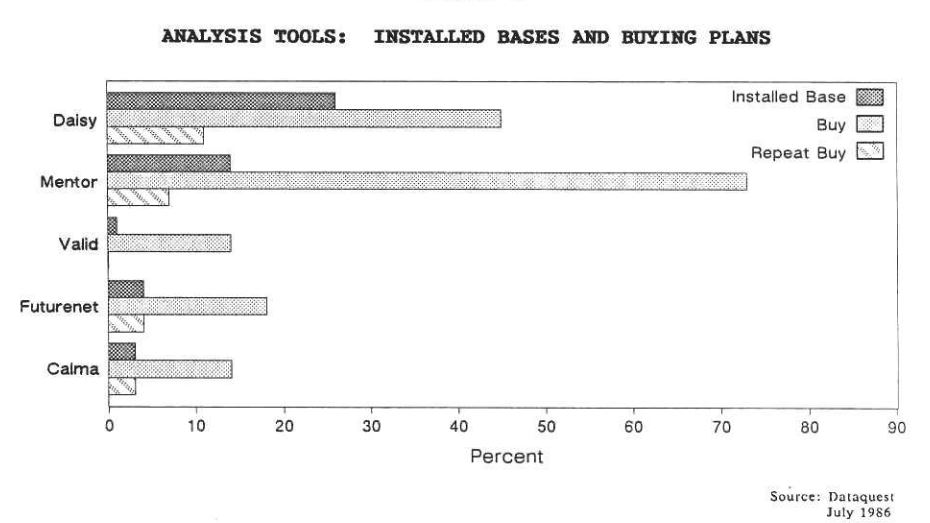 During 1980 and 1981, three companies, Daisy, Mentor and Valid were founded. Daisy and Valid attacked the computer automated design business with custom hardware workstations plus software to provide the unique capabilities required by engineers. Mentor made a critical decision. Charlie Sorgy at Mentor evaluated the Motorola 68K-based workstations being introduced and concluded that the Apollo workstation could provide everything that Mentor needed. Meanwhile Jerry Langler and others worked on the product definition, interacting with design engineers to zero in on a set of capabilities that would solve the design problems of those designing electronic chips and systems.

Until this time, semiconductor companies developed their own design tools, typically running on large mainframes. In the 1970’s, that meant IBM 3090-600 mainframes, the largest in the IBM family. The mainframes at most corporations were shared with the rest of the company. The result: not much design work was done during the last week of the quarter when the corporation was closing its books because the computers were loaded to capacity.

During this period, I worked for Texas Instruments which considered its EDA software as a competitive differentiator. Minicomputer based work stations from companies like Calma and Applicon, began taking over much of the physical layout task. TI developed its own system based upon the TI 990 minicomputer, a system that was not really well suited to the task. The 1982 Design Automation Conference, where Mentor introduced its first product called IdeaStation, changed things at TI. The Apollo workstation, based upon the Motorola 68000 provided clearly superior capabilities. TI signed up for a complete conversion to Mentor based upon the Apollo and, for a while, was the largest company user site for Apollo computer systems, with more than 900 workstations in use at the peak.

But TI was not a good customer for Mentor. The Mentor software had been adopted by much of the military/aerospace and automotive industries who needed standardization of design capture and simulation processes across their companies. Mentor was winning that battle against Daisy and Valid. TI Semiconductor Group, however, had a different set of needs; they wanted to modify the software, customize capabilities and do all sorts of things that distracted Mentor from its strategic direction. So TI and Mentor parted ways. TI went back to its proprietary software and deployed it on the Apollo and Mentor focused on systems companies. 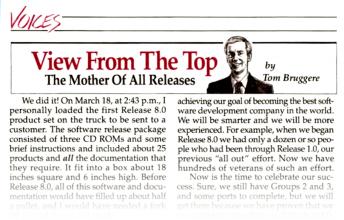 In the next ten years, semiconductor companies like TI became more important to the EDA industry. Most semiconductor companies didn’t have TI’s history of EDA software development. So a commercial EDA industry became increasingly viable. As the growth of the EDA industry accelerated, it became apparent that a new generation of product was needed. There were no standards for user interfaces for engineering workstations from Apollo, Sun or other new competitors. Interoperability with third party applications was not well supported. Mentor proposed a totally new architecture, called Version 8.0 (later euphemistically referred to as Version Late dot Slow), or Falcon. The idea was a unified environment that could utilize the same user interface and database. Not a good approach but the customers loved the idea. One more example of Clayton Christianson’s “Innovator’s Dilemma” where doing what customers say they want is frequently not the right solution.

In retrospect, a single database is not appropriate for the wide variety of formats required for integrated circuit design. And the workstation companies solved the problem of standard user interfaces themselves so ultimately there was no need for Mentor to provide one. The really critical mistake, however, was terminating the legacy family of design software without completion of a new generation of products. As the schedule for Version 8.0 slipped, there was less and less product available for customers to buy. Mentor’s revenue peaked at about $450 million and declined to $325 million with lots of employee frustration and resignations as the entire company was mobilized to save Version 8.0.

The Falcon approach never really worked. Fortunately Mentor was saved with a variety of world class point tools like Calibre and Tessent that became the basis for specialty design platforms. Throughout this transition, the leading competitors adopted, and argued for, a new paradigm. That paradigm was a single vendor flow which never evolved. Why? Because no one company can be the best at everything. So integration of tools and methodologies from different companies became critical to all those who wanted best-in-class design environments.

One great aspect of the EDA industry was the ability of new startups to successfully introduce a new point tool and grow to be valuable enterprises. Most of these companies were acquired by one of the “Big Three”, Mentor, Cadence or Synopsys. Interestingly, the combined market share of Mentor, Cadence and Synopsys, remained almost constant over a twenty year period at 75% plus or minus 5% despite all the acquisitions. Cadence grew almost exclusively by acquisition while Mentor did very few. Synopsys was somewhere in between. I once joked to a group of Cadence employees that, other than Spectre, I couldn’t think of a single successful Cadence product that was conceived and developed within Cadence. The group looked shocked and told me that I was not correct. “Every line of Spectre”, they said, “was developed at U.C. Berkeley”.

Mentor went through a very difficult period. Rarely does a software company go into decline and then recover. The reason is that software companies have a large fixed cost base of employees and, when their revenue declines, they have no choice but to reduce personnel, which makes recovery difficult. Mentor was an exception. But it missed many turns of the industry and had to focus on areas of specialization where it could be number one. That strategy worked but it took a long time.

And today, it still works. EDA is a business like the recording industry. There are rock stars and they develop hits. Once a hit becomes entrenched, it’s very hard to displace. Mentor focused on a few key areas where its position is hard to attack. Physical verification through the Calibre family is an example. Calibre is the Golden signoff tool, even though there are foundries that will grudgingly accept alternatives. When the debate about a variation in design rules occurs, the discussion between design and manufacturing people always returns to Calibre. PCB technology has similarities. You can use a variety of less expensive tools but why make life difficult for yourself?

Tessent Design for Test became a hallmark of this specialization strategy by putting together a group of the world’s best test people and letting them do their thing. Under Janusz Rajski and a large group of test gurus, unique technologies like test compression, cell-aware test, hierarchical test, etc. were developed and used to build a commanding market share. Other areas where this point tool strategy was used to grow a complete design platform included high level synthesis, optical proximity correction, automotive wiring and others for a total of 13 out of the forty largest segments of EDA, according to Gary Smith EDA.

Since the mid 1970’s, three companies have had the largest share of the EDA market. Computervision, Calma and Applicon gave way to Daisy, Mentor and Valid and then Mentor, Cadence and Synopsys. Are three large EDA companies a stable configuration as long as technology is evolving rapidly? Probably. Unless a major discontinuity occurs. At which time, new companies will appear and we’ll probably have another shakeout.

3 Replies to “Mentor Rise and Fall”