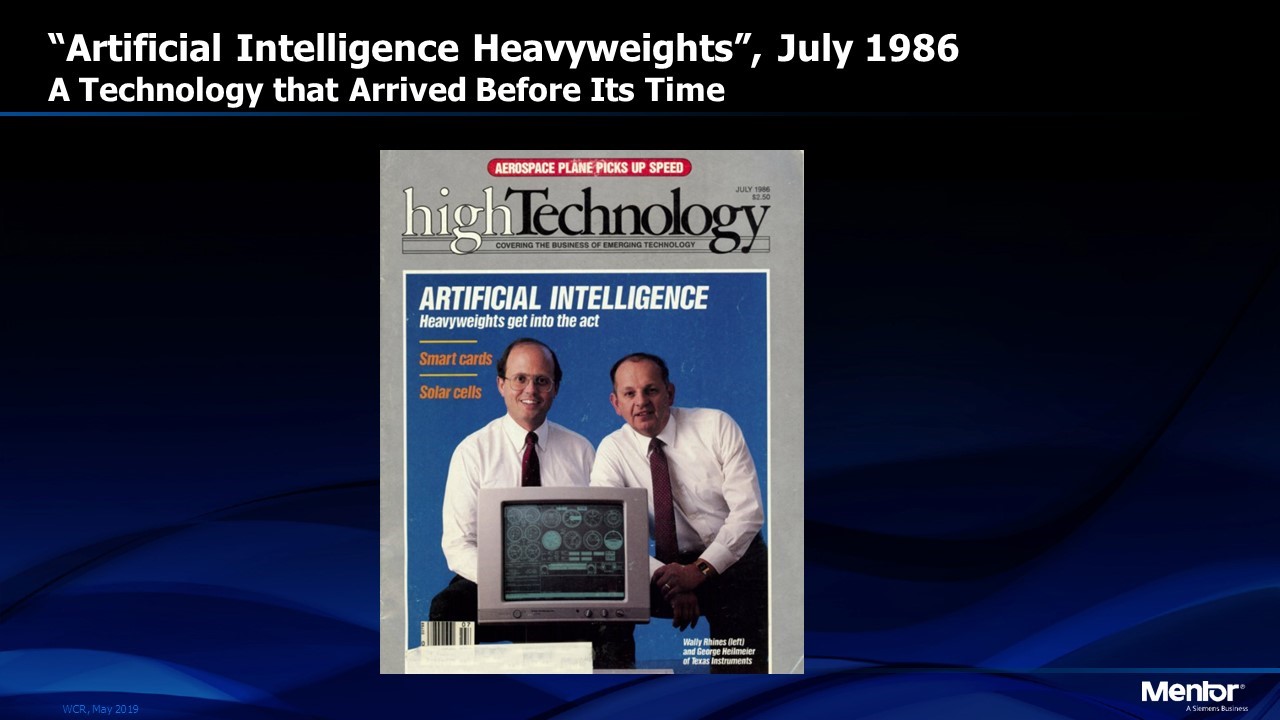 Artificial Intelligence
One of the most exciting new applications affecting semiconductor technology is the broad adoption of AI related analytics. AI is not a new technology.  Figure 1 is the cover of High Technology magazine in July 1986.  I am the person on the left and George Heilmeier, former head of DARPA, is the one on the right.  We tried hard in the 1980s but the infrastructure had not developed to a level where AI would provide profitable opportunities.

What’s different today? In the 1980s, we lacked the computing power to handle big data.   We didn’t have very much big data to analyze partly because there was no internet of things. More sophisticated algorithms were needed.  Most of all, there were no obvious near term ways to make money using AI.

Today we have overcome all these limitations.  AI and machine learning have taken on a life of their own.  They have become limited, however, by the processing power available.  Traditional von Neuman general purpose computing architectures are inadequate to handle the complex AI algorithms. The result: a new generation of computer architectures is evolving.

Figure 2 shows the trend in venture capital funded fabless semiconductor companies in recent years. In 2018, a new record of $3.4 billion total investment was set, far above the previous record of $2.5 billion in the year 2000.

Venture capitalists have been focused on social media and software companies over the last twenty years.  Where is all this new money going?  The answer can be seen in Figure 3. AI and machine learning have dominated the fabless semiconductor industry investment by venture capitalists since 2012 with $1.9 billion invested. 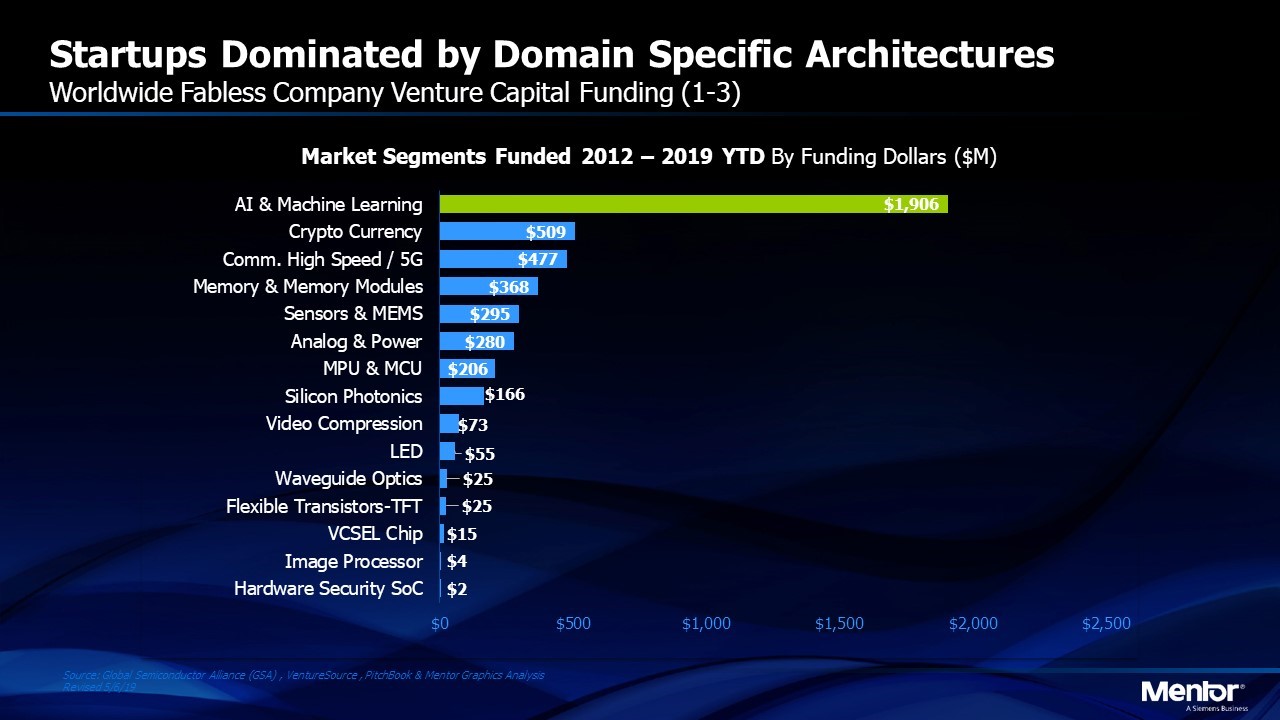 Figure 3.  Venture funded startups since 2012 by application. AI and machine learning constitute the majority of applications

Beyond pattern recognition, the largest share of new fabless semiconductor companies are being funded for data center analytics or edge computing.

Edge Computing
Intelligence historically flows downhill (Figure 4). In the 1960s, mainframe computers dominated our computing capacity.  Dumb terminals connected us to our mainframe computing power.  By the 1980s, minicomputers were well established as an intermediate computing layer between the user and the mainframe.  Twenty years later, the personal computer became the local computing resource.  In another twenty years, the current environment has evolved.  Large cloud-based server resources handle the heavy computing but in between us and the cloud is the fog made up of gateways that collect, aggregate and locally process data.  Beneath that layer are the edge nodes in the mist, collecting and pre-processing the data.  As time passes, the lower layers will inevitably gain more intelligence as semiconductor technology allows us to build more intelligence into the local nodes. Those nodes will become increasingly complex as they incorporate disparate technologies – analog, digital, RF, MEMs, etc.  (Figure 5).  This creates major design and verification challenges.  Most of EDA history is focused upon digital logic and memory.  Edge nodes may require mixed technologies.  Simulating digital logic connected to analog, RF and other technologies is not easy.  A whole new family of EDA tools is required. 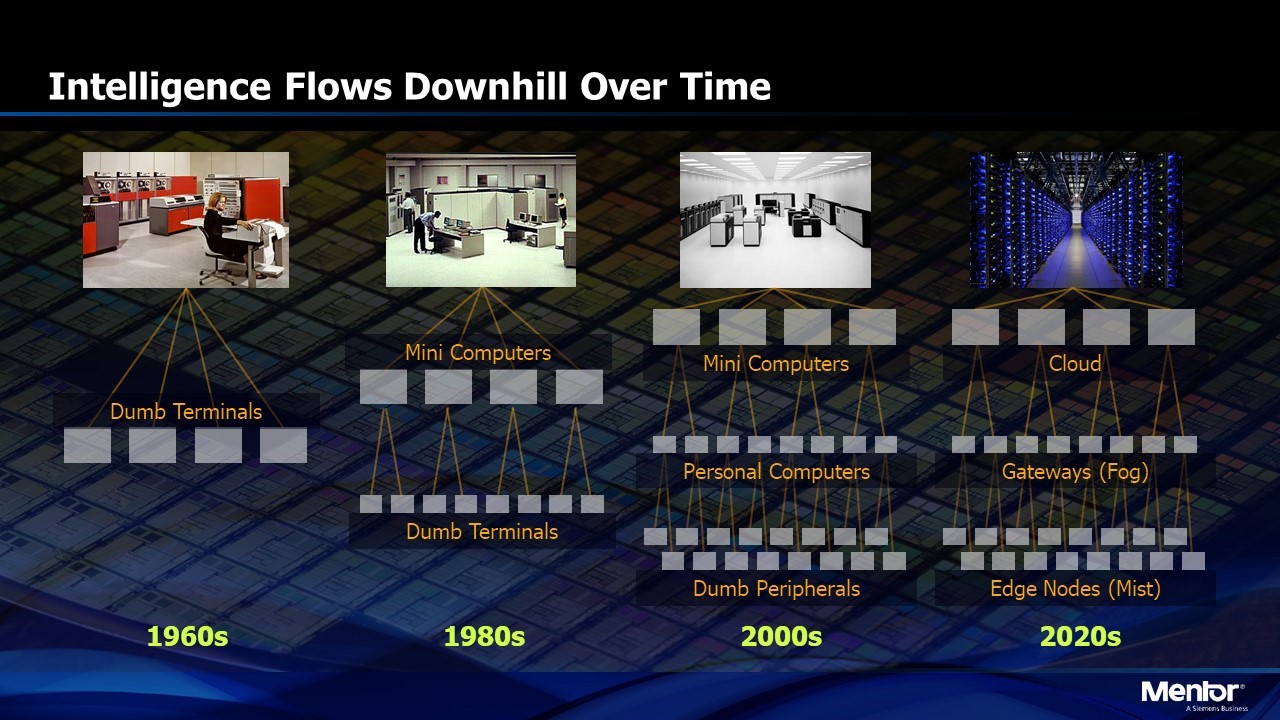 5G Wireless Technology
In the next decade, wireless communication will move to the next generation of technology, 5G.  This transition is more significant than past generations.  It affects a wide variety of the infrastructure beyond consumer communications.  Significant impact will be felt in applications involving industrial control, non-real time automotive analytics, urban infrastructure and much more.

One of the great opportunities for the semiconductor industry is the increased number of base stations required to support the infrastructure of 5G and the larger number of antennas in a phone. The number of semiconductor components required will grow dramatically as the world builds a 5G infrastructure. Connectivity to the cloud makes a wide variety of capabilities possible, especially in the factories of the world.  Gateways, which already generate more than three percent of worldwide semiconductor revenue, will be needed. 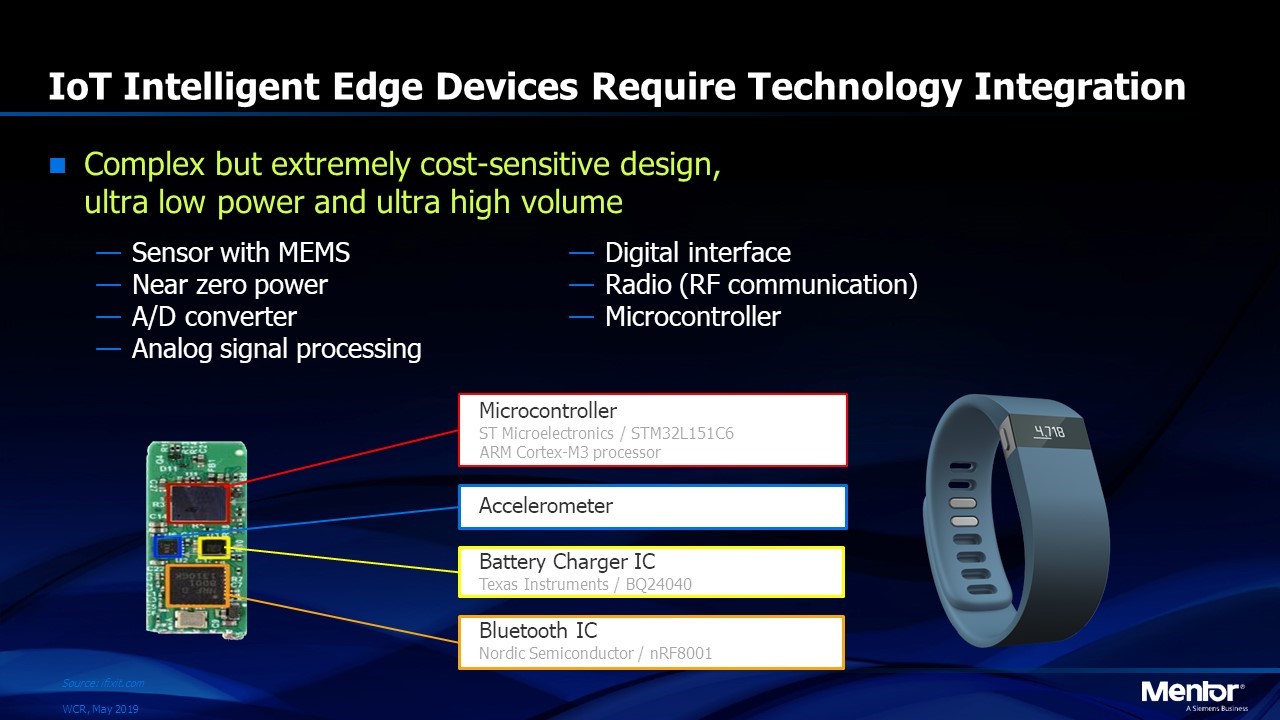 Automotive Applications
During the last ten years, sales of semiconductors for automotive applications has increased to about 12% of the total semiconductor market as the electronic content of vehicles increased.  Some traditional electronic functions like engine control will not be needed in electric vehicles but there will be new requirements as well as the continued growth of infotainment and automotive driver assistance (ADAS) that require electronic controls. 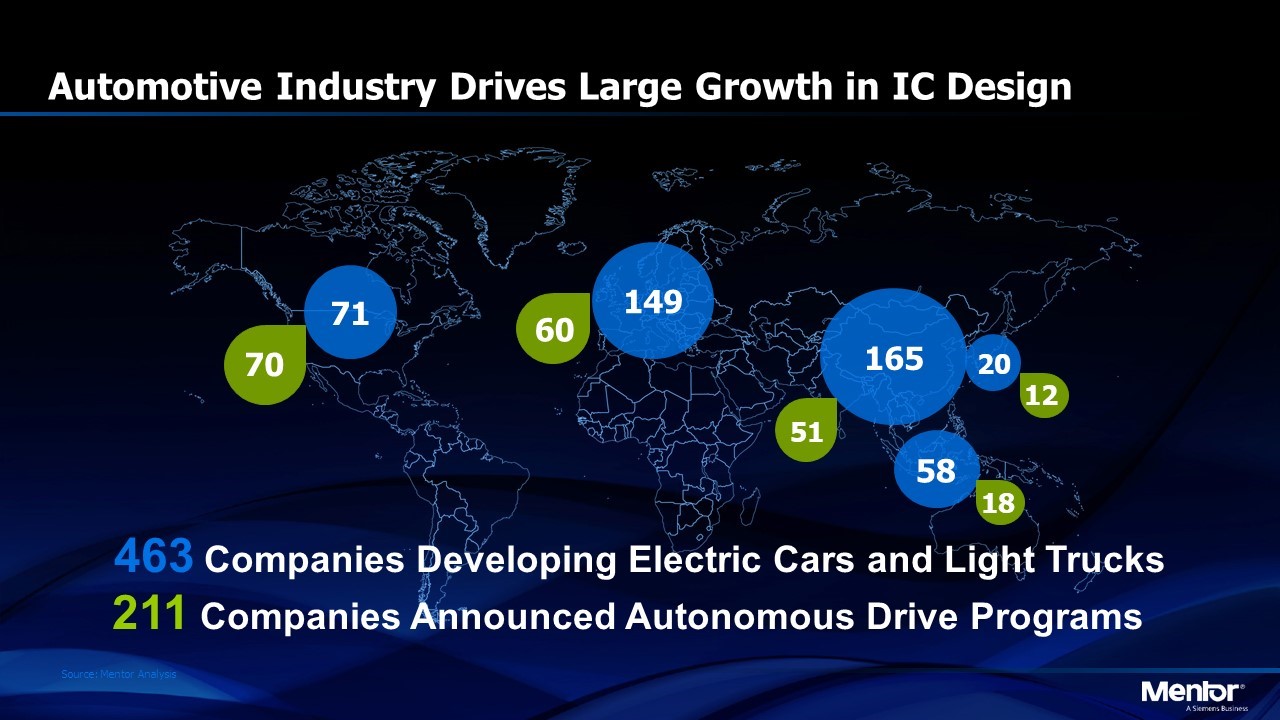 The number of companies planning to build electric cars or light trucks has now grown to 463, more than half of which are based in China (Figure 6).  Two hundred eleven companies have announced autonomous driving programs.  This number of suppliers is not needed and many, or even most, will drop out as we move closer to production. Meanwhile, one would expect an incredible bubble in demand for automotive ICs followed by a rapid decline.

It’s likely that no more than a dozen companies will lead the way in supplying the complex image processing subsystems required for autonomous vehicles.  It’s difficult to predict which ones will succeed but likely that companies that have not been traditional automotive OEMs will make up most of the total.

Other Predictable Futures
Lots of other technologies offer promise for growth.  Quantum computing is interesting because it has some capabilities like encryption that are not solved easily through other means.  The time lag for technologies like this tend to be longer than the evolutionary ones but they will eventually emerge in some form.

The history of the semiconductor industry is driven by major new applications.  Waves of growth were initiated by defense electronics in the 1950s, mainframe computers in the 60s, minicomputers in the 70s, personal computers in the 80s, laptops in the 90s and wireless communications in the most recent two years. Each wave has been accompanied by the emergence of new semiconductor competitors followed by a shakeout that leaves one supplier dominant and shuffles the top ten ranking of companies by revenue (Figure 10 in Chapter 5).

At the same time, the semiconductor industry, like most industries, moves back and forth from standardized versus customized solutions.  This has been referred to as “Makimoto’s Wave” after Tsugio Makimoto, former CEO of Hitachi Semiconductor, who popularized the phenomenon.  As we move into the third decade of the twenty-first century, the semiconductor industry is moving into a customization wave.  Standard von Neuman computer architectures that operate on a string of standard instructions have dominated the computer and semiconductor industries.  Architectures like the Intel 808X and ARM RISC will continue.  Domain-specific architectures tailored for specific tasks like facial recognition are emerging. There will be dozens more as AI and machine learning usher in new opportunities.

What should we consider as the future possibilities for the semiconductor industry? As we showed in Chapter 4, the semiconductor industry is likely to grow through evolutionary means through about 2040 or when demands for lower power or higher performance usher in a new technology for information “switching”.  Carbon nanotubes, bio-switches, or many other possibilities could fill in the switching learning curve of Figure 5, Chapter 3.  Chances are that this “switch” will happen gradually as the need arises for a new application.  In addition, non-silicon materials like Gallium Nitride, Silicon Carbide and other materials will take on increasingly important roles driven by need for characteristics like larger band gaps, i.e. roles like power switching, microwave communications and existing ones like solid state lighting.

Just as steel is still a primary material for construction one hundred fifty years after the booming growth of the steel industry, semiconductors will be at the foundation of business and technology growth for a long time.  Those of us who participated in the last fifty years of exciting growth of semiconductors are still surprised when we see our “mature” industry generate another wave of growth to accompany an emerging application.  I’m confident that there will be many more to come.

One Reply to “Chapter Twelve – The Future”