Register / Log In
Guests have limited access.
Join our community today!
You are currently viewing SemiWiki as a guest which gives you limited access to the site. To view blog comments and experience other SemiWiki features you must be a registered member. Registration is fast, simple, and absolutely free so please, join our community today!
Advanced ASICs – It Takes an Ecosystem
by Mike Gianfagna on 11-26-2017 at 2:00 pm
View Profile
View Forum Posts 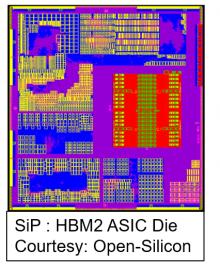 Open Silicon hosted a webinar today focusing on their High Bandwidth Memory (HBM) IP-subsystem product offering. Their IP-subsystem is based on the HBM2 standard and includes blocks for the memory controller, PHY and high-speed I/Os, all targeted to TSMC 16nm FF+ process. The IP-subsystem supports the full HBM2 standard with… Read More

When someone says, “2.5D packaging” my first thought is TSMC and my second thought is Herb Reiter. Herb has more than 40 years of semiconductor experience and he has been a tireless promoter of 2.5D packaging for many years. Herb writes for and works with industry organizations on 2.5D work groups and events at conferences… Read More

As you all know I’m a big fan of the ASIC business dating back to the start of the fabless semiconductor transformation where anybody could send a design spec to an ASIC company and get a chip back. The ASIC business model also started the smart phone revolution when Samsung built the first Apple SoCs for the iPhones and iPads.

Last week Samsung hosted the GSA Silicon Valley “State of the Industry” Meet-up which was well attended by the semiconductor elite, myself included. The agenda started with an update on the semiconductor industry outlook followed by deep dives into Automotive, IoT, Artificial Intelligence, and Cybersecurity all of which are… Read More