Cameras are becoming ubiquitous thanks to a new wave of applications that span GoPro for sports, smart glass for the Internet eyewear, ADAS for car safety, and more. However, while these cameras boast an increasing amount of megapixels to enhance the quality of vision, what they increasingly need is more processing power to analyze… Read More

There are too many IoT protocols. Way too many. Anyone who says one single protocol will be the winner from end-to-end in all IoT applications and markets is smoking something. Software defined, multi-protocol gateways are the only hope on the IoT – and DSP cores enable this strategy.… Read More

We’re all quite twitterpated with the smartphone. Admittedly, it has taken much of the world by storm, and dominates EDA discussion because of the complex SoCs inside. Feature phones have repeatedly been declared dead, or at least disinteresting, but the numbers tell a different story.

While Europe and the US enjoy much higher… Read More

The future market performance for an IP vendor licensing an IP based on a model with upfront fee plus royalties can be easily and safely evaluated if you look at the first part of revenue: upfront fee. Even if the royalty part is declining, exhibiting a 52% increase (Q4 2013 to Q4 2012) in upfront licensing fee is a promise that the future… Read More 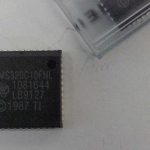 Trying to trace DSP birth as a standard IC product, you come back to the early 80’s, when a certain Computer manufacturer named IBM has asked to a certain Semi-Conductor giant (at that time) named Texas Instruments if they could turn a lab concept, Digital Signal Processor, into a standard product that IBM could buy to TI, like they… Read More 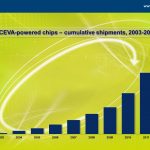 Why making the difference between chips and cores, when mentioning that CEVA’s customers have shipped four billion IC to date? Because that can make a big difference! Imagine for example an IP vendor selling processor IP cores to be used in massively parallel computing application, when the chip maker create a processor NxM matrix,… Read More