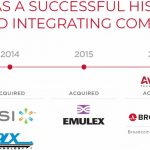 As I watched the GOP debate between the top 10 candidates last week I asked myself which one of those men would I pick to help the United States stay competitive in the semiconductor industry. I’m saddened to say that the only candidate even remotely qualified for that conversation in my opinion is Donald Trump. Of course I backed Ross… Read More

If Ford is a reference model for value chain in the Industrial Age, Cisco is the icon of the twenty-first-century digital economy. The networking gear maker, who achieved phenomenal growth with the rise of the Internet, has been remarkably successful in snapping up and integrating scores of companies for products it could not … Read More

Semiconductor Acquisitions will Fuel Innovation!
by Daniel Nenni on 05-30-2015 at 7:00 am
View Profile
View Forum Posts

Has the semiconductor world gone acquisition crazy? It certainly seems that way with the more than $60B in M&A activity which may now include Altera. We are probably getting close to the 80/20 rule where 80% of the semiconductor revenue is being generated by 20% of the companies. Not far off from where we were at 25 years ago when… Read More