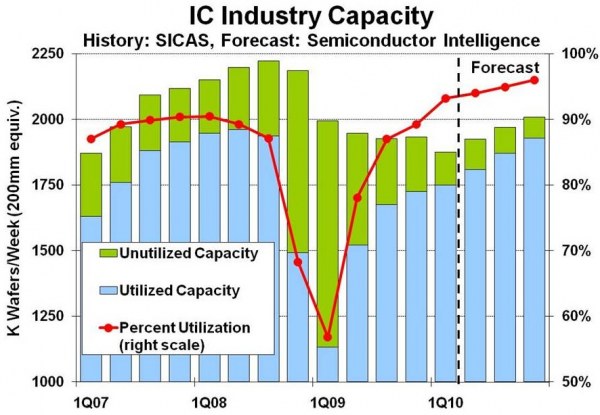 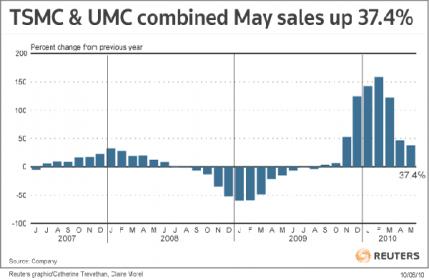 TSMC and UMC financials also support Bernenke. TSMC revenue hit an all time high of $1.07 billion in May 2010, resetting the record of $1.048 billion in the prior month. May revenue 2010 grew 37.9% from a year earlier. TSMC has estimated its consolidated revenues will reach $3.12 billion in the second quarter with the results of April and May amounting to more than 2/3rds of that number. UMC also posted May ($313M) over April ($289M) gains with revenue for the January-May rising 82.8% from a year earlier. Both companies acknowledged mobile internet devices as a driving force behind record revenues and profits for 2010.

Speaking of which, an updated version of Mary Meeker’s Internet Report can be found here, I first blogged about it in: Semiconductor Industry 2008 – 2018. 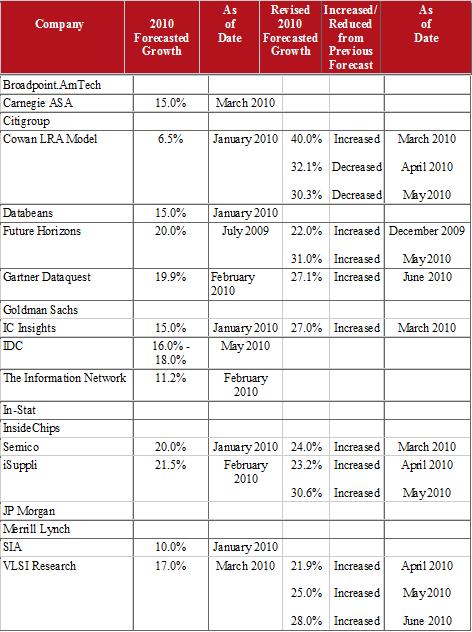 ”Chip revenue growth is clearly outpacing system revenue growth, and that is a concern. Gartner’s new semiconductor forecast has below-average growth in the second half of 2010, as we are anticipating a minor correction to realign semiconductor sales with electronic system sales.”

Wait, are semiconductor companies producing more chips than the systems companies can ship? Is this an inventory correction or an oversupply problem due to fears of capacity shortages? Semiconductor manufacturing capacity averaged 60% before the economic crisis started in 2009 and is up to 96% one year later? 27-30% semiconductor growth when economic forecasts project global economic growth rates of 4.6 percent in 2010 and 4.5 percent for 2011? Speaking of instability:

“Achieving long-term fiscal sustainability will be difficult. But unless we as a nation make a strong commitment to fiscal responsibility, in the longer run, we will have neither financial stability nor healthy economic growth.” Chairman Ben S. Bernanke, Economic and financial conditions and the federal budget Before the Committee on the Budget, U.S. House of Representatives, Washington, D.C. June 9, 2010