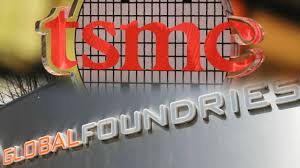 Though it may or may not be the intention of the current administration to make the lawsuit between Global Foundries and TSMC a surrogate trade war, it certainly has the right script.  A US based company, Global Foundries, is suing a “China” based (cause thats what China says Taiwan is…) for intellectual IP and patent infringement.  GloFo even has at its technology heart, the once proud, now rusting, old IBM technology base, that back in the day was a technology leader now blown past by TSMC (read that as China). It conjures up the standard “China is killing US industry” image as GloFo has wrapped an American flag around itself.

(We will omit the inconvenient truth that GloFo is setting up shop in China mainland along with TSMC).

A “Twitter Ready” Lawsuit
The lawsuit by GloFo against TSMC seems to be a “twitter ready” set up for someone to come along and hit it out of the park.  The timing is obviously very suspect given the current trade war issues with China and many politicians looking for more excuses and ammunition.

It paints TSMC (and Taiwan) as the enemy & part of China
The problem we have is that the lawsuit obviously paints TSMC and Taiwan with the same broad paint brush as China.

Since when did TSMC & Taiwan become the enemy of the US and the US industrial base?

Follows in the footsteps of Hong Kong
We had warned in a recent newsletter that we were concerned that Taiwan could become the next Hong Kong as the Chinese could be emboldened by the administrations “abandoning” of Hong Kong by saying “its none of our business because Hong Kong is part of China”.

Could this lawsuit further embolden China towards Taiwan if the US administration distances itself further from Taiwan and views Taiwan as part of the China trade threat against the US heartland?  If the administration takes the GloFo side that would seem to be the case.

Could TSMC run into China’s open arms?
If it looked like the US government were taking sides against TSMC they may not have a choice but to seek refuge.

UMC (TSMC’s competitor) is already deep within China’s embrace as they clearly had a hand in stealing some of Micron’s IP from Taiwan to mainland China in the case of Jinhua.

TSMC obviously is building up fabs in China and could decide to move more operations there or bring more technology thus accelerating “made in China 2025.

It depends a lot on how the current US administration plays this and how much they take sides.

GloFo reaching out from the grave
Given that Global Foundries gave up the race to be a technology leader in the semiconductor industry a year ago when it abandoned advanced technology, they now don’t have a lot to lose by starting a war against TSMC related to leading edge process. Theres not a whole lot TSMC can do to shut down GloFo’s advanced technology through legal means as GloFo already shut it down themselves.  TSMC on the other hand has a lot to lose as the technology leader with the biggest customers.

GloFo clearly lost the technology & production war with TSMC in the market and this may be a bit of a revenge or sour grapes or both….except that the real reason is money….

Squeezing money out of a dead fab
It has long been rumored that Abu Dhabi is looking to unload GloFo and we have seen parts already sold off. Recently the mask operations were sold off and some ASML EUV scanners have already been sold off as part of the leading edge equipment yard sale.

It would seem very logical that GloFo would seek to monetize any and all assets to maximize a sale value or cash return on their way underwater investment.  TSMC could decide the risk is too big  (especially if the US government backs GloFo) and just pay a royalty to GloFo. In fact the current administration would probably trumpet a “China based” company paying a royalty to a “wronged” US company. So its not too far out of the question

Stuck in a “Catch 22”
We see the current situation as a bit of a “catch 22”. If the US sides with GloFo, it alienates TSMC and Taiwan whom have been great partners and the key enablers of US technology. If it sides with TSMC, it will be seen as against US based companies and for Chinese IP theft. If it doesn’t take a position it will be seen as ignoring a major trade and IP theft issue with China….the issue that has been the hallmark of the administration.

Its a bad situation and GloFo may have put the administration in a box at a sensitive time.

Summary:
While we certainly have been very vocal about US and China trade and IP issues, the GloFo and TSMC lawsuit has absolutely zero to do with them and is not part of the overall larger trade & IP issue even though GloFo would like to make it so.

The semiconductor industry is a virtual landmine field of patents that make it almost impossible to manufacture a leading edge device without leaning on someone else’s IP or patents.  TSMC is quoted as having 37,000 patents and GloFo got 16,000 from IBM.

Companies collect patents like nations collect nuclear weapons in a game of “mutually assured destruction” in which one doesn’t sue the other as they are afraid of the response. GloFo is no longer in the game so they don’t care, they are already dead.

Its a bad precedent to set and the US is going to have to walk a carefully choreographed tightrope to avoid a mess.

The stocks
All this just adds to the general “overhang” on the stocks related to China trade and adds another variable and another news point to move the stocks.

Other companies like Apple, AMD, Nvidia and other customers and suppliers could get sucked into the vortex as well. GloFo doesn’t care as they aren’t customers and GloFo is private anyway.

It will be a long time to resolve but we would be more concerned about either a near term escalation or involvement of other companies that get hit by collateral damage.