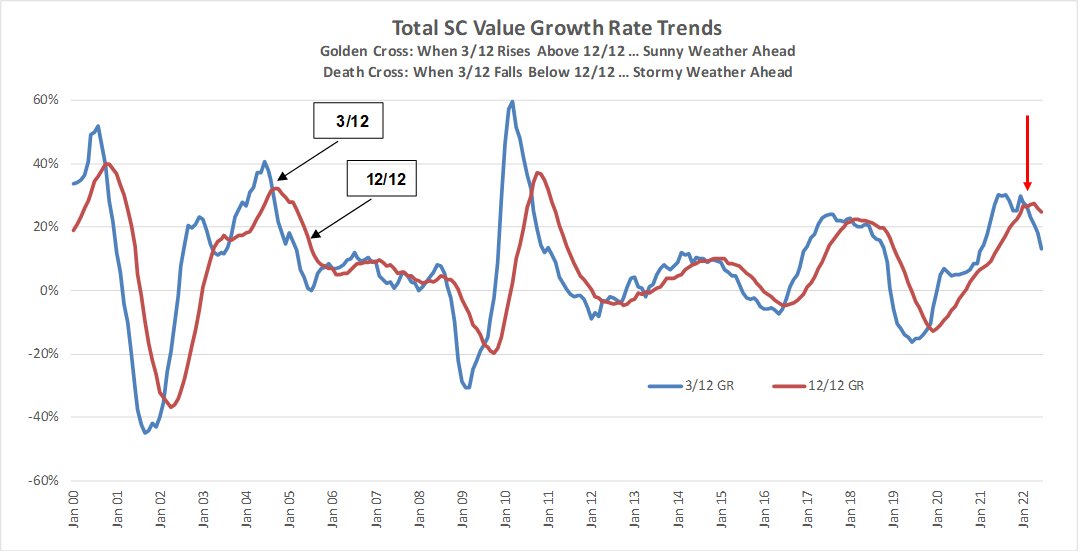 The Semiconductor Market Downturn Has Started
by Malcolm Penn on 08-07-2022 at 6:00 am
View Profile
View Forum Posts

What we alone said would surely happen, but what was widely denied by the industry, was confirmed with June’s WSTS Blue Book report.  Right on cue with our December 2021 forecast, the current semiconductor Super Cycle is finally drawing to a close and the 17th market downturn has now well and truly started.

At the macro level, the worldwide semiconductor momentum indicator, pictured above, passed through the ‘Death Cross’ in March 2022 signifying storm clouds on the horizon; June’s market data saw the start of the storm.

Anecdotal indication of the downturn has also started to filter into the industry consciousness, especially at the commodity end of the market, with several second-tier foundry houses and IDMs reportedly mulling scaling back or postponing their planned capacity expansions.

Already Global Foundries has warned it expects to see its capacity utilization fall in the second half of the year, due to order cuts by its fabless clients, and Samsung is reportedly suffering a similar impact too.

The downstream knock-on effect on the semiconductor equipment and materials industry has already started to bite, with some firms starting to see second-half year push backs and delays.

PC and smartphone shipments, two key semiconductor market drivers, are both showing declines in the first half of 2022, with PC shipment now reportedly at their lowest level since 2019, and Smartphone shipments expected to show negative growth in 2022.

Products that require specific manufacturing capacities, such as automotive, are still showing signs of tightness, but the end market demand for cars is likely to soften as prospective customers, now squeezed by and struggling with inflation and a massive spike in energy costs, put off buying that new car.

With demand for consumer MCUs, display drivers, power management and other mass-market chips falling, nearly all mature node fabs have seen their customers scale back wafer starts for the second half of 2022 prompting several second- and third-tier foundries to start cutting prices.  Some are even rumoured to be offering fire-sale incentives and cut-price deals for additional wafer orders to maintain their fab utilization rates.

Such actions will, however, we believe, prove fruitless given the industry-wide pressure, and customer need, to offload bloated inventories, built up over the past two years of supply shortages.

Time will tell if customers violate their long-term agreements (LTAs) to ease inventory pressure or, if they do, what actions the suppliers could in reality actually do.

Whilst TSMC is in a better position overall, due to its market dominance especially at the leading-edge – leading-edge capacity is, by definition, always in short supply – it too will not escape the effects of the downturn, given the wide diversity of the end markets it serves.

We believe TSMC will need to tread very carefully indeed here if it is to avoid an inevitable antitrust challenge by its customers and competitors of market exploitation and price gorging if it carries out its plan to raise its prices in 2023 against the prevailing market trends.

Devil’s In The Detail

At the detailed level, monthly IC unit shipments and ASPs shrank sequentially 10.6 and 14.9 percent in June, resulting in a whopping double-digit sales value decline of 23.9 percent.  The comparable numbers for the previous month were all positive at 3.3 percent, 7.8 percent and 11.4 percent respectively.

The inventory correction we cautioned was inevitable is now starting to manifest itself by way of reduced unit shipments with all sectors showing negative monthly growth vs. May.  This was in sharp reversal to May’s unit growth results, which showed all sectors still growing, other than Micro which suffered a modest 0.6 percent decline.

Reduced unit shipments will quickly translate into a sharp cutback in new orders, taking the pressure of fab capacity and eventually shorter lead times, just as the first wave of increased capacity is coming online.

In parallel, IC ASPs fell an eye-watering 14.9 percent in June vs. May, with Memory hit hardest dropping 19.0 percent.  Micro ASPs fell 8.5 percent followed by Logic at 7.2 percent and Analog at 3.7 percent.

Adding to these woes, in its July mid-year report, the IMF reported a gloomy and more uncertain global outlook, downgrading its 2022 GDP forecast from 3.6 to 3.2 percent, with the economic risks now all overwhelmingly tilted to the downside.

It is this combination of negative ASP growth, falling unit shipments, increased capacity and a weak global economy that will tip the semiconductor market into negative growth in 2023.

Granted, most firms are still reporting strong second quarter results and full order books for Q3/Q4-2022, but, in the same breath, many are now starting to admit that these orders could easily vaporize.

When we published our 6.0 percent growth forecast for 2022, shrinking by 22.0 percent in 2023, in May 2022, we were still the only analyst cautioning that a downturn was imminent.  It might yet transpire even our forecast was optimistic.  Based on a forecast that the second quarter would grow 1.5 percent vs. Q1-2022, with the actual growth coming in at only 0.5 percent, our May 2022 forecast has now been pushed into bear territory.

Whilst we are not yet minded to formally downgrade our forecast, we are even more certain we called the 2022 downturn correctly when we issued our warning at the end of last year.

We will be formally revisiting the numbers for our annual mid-term Industry Forecast Update webinar on September 13 but until then suffice it to say there is now no upside to our 2022 forecast and all industry hopes of double-digit growth for 2022 have been blown out of the water.

The Roots Of Silicon Valley