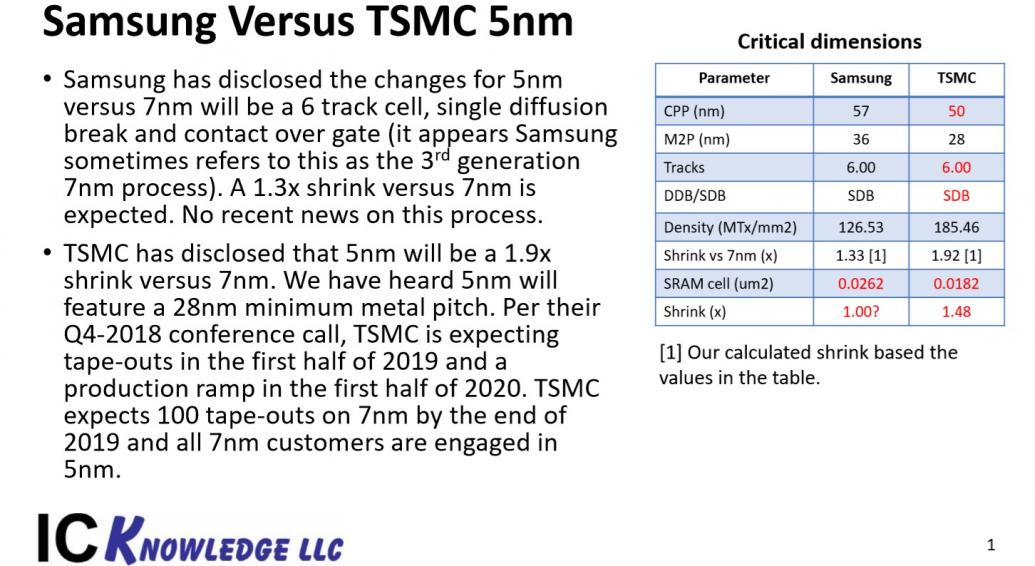 TSMC has always been my bellwether and for 2019 I think we need to pay careful attention. Bad economic news has been spreading inside the fabless semiconductor ecosystem (tool and IP budgets have been tightening) but I think it is a bit premature. Let’s take a look at the TSMC 2018 Q4 earnings call and talk more about it in the comments section:

Contribution by application in 2018

Comments from CC Wei:
Our N5 technology development is well on track, with customer tape-out schedule for first half 2019 and volume production ramp in first half 2020. We are already in preparation for N5’s ramp. All applications that are using 7-nanometer today will adopt 5-nanometer. In addition, we are expecting the customer product portfolio at N5 and see expanding addressable market opportunities. We expect more applications in HPC to adopt N5. Thus we are confident that N5 will also be a large and long-lasting node for TSMC.

TSMC all but locked up 7nm and making the transition from 7N to 5N should pave the way for another big node for TSMC. Samsung however will be better prepared to compete with TSMC at 5nm so there may be a bigger split. For example, AMD is a big upside for TSMC 7nm in 2H 2019 but from what I am told AMD will split manufacturing between TSMC and Samung at 5nm. The same thing with Qualcomm and others. As I have mentioned before, multi-sourcing has always been the foundation of the fabless semiconductor ecosystem and at the leading edge it is TSMC and Samsung.

Now let’s take a look at the Analyst Q&A:

The first question was on CAPEX. TSMC had previously said CAPEX of $10-12B would be sufficient for 5-10% growth. In 2018 TSMC CAPEX was $10.5B and in 2019 CAPEX is expected to be $10-11B. TSMC is a master of fab and equipment re-use so I do not see a CAPEX problem here as others have. For example N7+ will be a very quick node so the fab space and EUV machines will be reallocated to 5nm in short order.

The next question was on revenue by application which I found interesting. From what I have seen on SemiWiki, automotive is more of a bubble than a major growth area. IoT of course is booming. AI I guess is part of HPC but is overshadowed by the cryptocurrency bubble burst so you hardly notice it.

Roland Shu
Thank you. Happy New Year. First question is, C.C., you said for the mobile business this year, you still expect some growth, but under your overall year, on the whole year revenue growth just slightly. So how about the growth of the other platform products, IoT, HPC and automotive?

The rest of the questions were about trying to figure out why the slowdown happened and what TSMC sees for the future. In my experience, at the beginning of a slowdown such as this, smart CEOs bite the bullet and give very conservative forecasts moving forward so they only have to deliver bad news once a year. This is what TSMC is doing in my opinion, being very conservative.

In my opinion smartphone sales have been sluggish due to market saturation, price gouging, and lack of innovation and will continue to be sluggish until we see 5G phones. Everyone will want 5G and very soon everyone will need 5G to keep up with the new features the extra bandwidth will bring. 5G really is a known term amongst the masses. I heard kids calling parents 3G as an insult when 4G came out.

Price is a big issue for me. We used to get big breaks on new phones from carriers with 2 year contracts. Now we don’t so we hold on to them longer. The carriers now offer low monthly payments on new phones in lieu of discounts but you still have to pay taxes on the retail price. It is a better deal but not by much and a big departure from when we got free phones for a new contract.

Bottom line:I don’t think this year will be as bad for the semiconductor industry as some are predicting. We absolutely got ahead of ourselves with the last two double digit growth years and 1H 2019 will be the correction. But moving forward I too see great promise in 5G and AI for companies making chips, absolutely.

You can see the whole transcript HERE.

10 Replies to “TSMC and Semiconductors 2019 and Beyond”