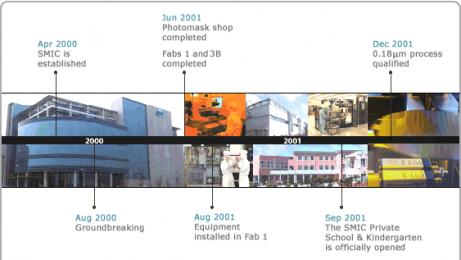 This blog is about the legal battle between TSMC and SMIC which is currently playing in the California court system. Taiwan Semiconductor Manufacturing Corporation (TSMC) and Semiconductor Manufacturing International Corporation (SMIC) do what their names suggest – the manufacturing of semiconductors for an international roster of clients. TSMC touts itself as the first chip foundry, SMIC touts itself as the first China-based chip foundry. TSMC is ranked #1 , SMIC is #4, see my blog TSMC vs Global Foundries for more details on capacity and revenues.

The starting point is illustrated above, where SMIC went from equipment being installed in August of 2001, to qualified production in December 2001. As a point of proof, TSMC referred to the Fab of the Year Award that SMIC received from Semiconductor International in 2003, highlighting the fact that just four months after installing equipment in its fab, SMIC had four processes up and running, manufacturing 18 different products. Adding to that suspicion was the claim that SMIC hired away 100+ TSMC employees that had access to the sensitive process data required to bring a fab to production. To begin the legal discovery process, TSMC analyzed SMIC .18m silicon from a Broadcom product and documented stark similarities to the identical product silicon from TSMC. With discovery came incriminating emails which are a centerpiece of the case. 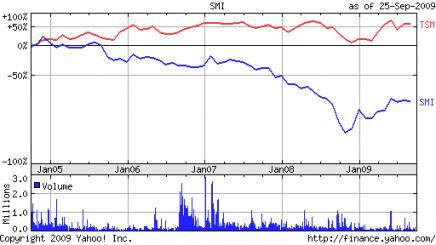 Not surprisingly, SMIC agreed to settle the case in February of 2005. Under terms of the settlement, SMIC is to pay TSMC $175 million over 6 years and the companies have agreed to cross license 180nm patent portfolios through December 2010.

“SMIC has carried out massive corporate espionage directed by certain [of] SMIC’s top operating officers,” the 31-page complaint said. “SMIC lavishly copied the information it stole from TSMC, word for word, line for line, diagram for diagram, and even typographical error for typographical error.”

In November 2006the High Court in Beijing accepted SMIC’s filing in which it claimed TSMC had intentionally disseminated untrue and misleading statements to damage SMIC’s reputation and goodwill.

TSMC “rather than competing fairly in the marketplace, have undertaken a concerted effort to infringe SMIC’s legal rights unfairly,”

TSMC filed in California for a reason, California has significant case law in regards to protecting intellectual property. SMIC filed in Bejing for a reason, China has scant case law in regards to intellectual property. It will be interesting how the Bejing and the California court proceedings compare. The California trial, which began this month, is expected to last 50-60 days, and is being broadcast by the Courtroom View Network. Trial updates will be available via my Twitter: DanielNenni