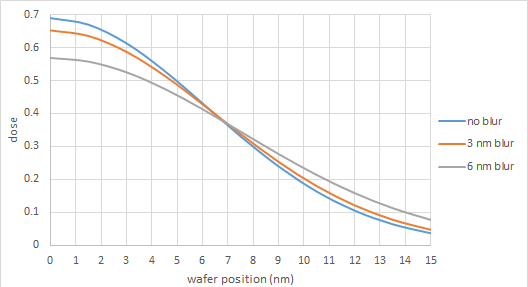 Electrons have the last word
The resist exposure is completed by the release of electrons following the absorption of the EUV photon. Photoelectrons initially released by EUV absorption are expected to be ~ 80 eV, and release energy by further ionization, producing secondary electrons [1]. The photoelectrons and secondary electrons can lose energy by plasmon generation as well [2]. Electrons with energies as low as 1.2 eV can still expose resists [3]. Dissociative electron attachment (DEA) can also occur at very low energies [4]. Consequently, the image is affected by the “blur” resulting from the spread of these electrons. An example is shown below in Figure 1. Even a few nm blur or a few nm blur difference can degrade the sub-20 nm image’s sensitivity to dose variations.

Figure 1. Secondary electron blur is modeled as a Gaussian function involved with the original non-blurred image, fitted with a Gaussian as well [5].

How far can the electrons travel?
A simple Monte Carlo simulation demonstrates that a fairly wide spread of electron paths is possible even with a low mean free path. In Figure 2, four simulation runs are shown, each representing 30 collisions of an electron, where the electron travels 1 nm in a random direction between collisions (including mostly elastic (no energy lost or gained) and inelastic low energy (<0.1 eV) transfers with phonons [6]), is shown to lead in some cases to travel distances approaching 10 nm. The “r” result is the net distance (regardless of direction) from the original starting point, treated here as (0, 0, 0) , i.e., r=sqrt(x^2+y^2+z^2).

Figure 2. Simulations of electrons going through 30 collisions, mostly elastic, the remaining assumed to be low energy transfers to phonons [6]. 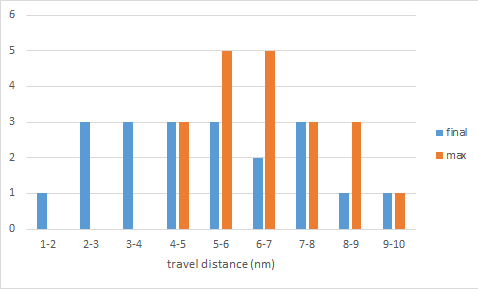 Figure 3. Distribution of final and maximum travel distances after 20 simulation runs using the conditions of Figure 2.

Increasing or decreasing the travel distance between collisions will naturally increase or decrease the net travel distance as well. The inter-collision distance of 1 nm is comparable to the step size used in other recent related work [7, 8]. Measurements of resist loss from low energy electrons are also in excess of 1 nm [3, 4]. Of course, more collisions accumulated will lead to a wider range of travel distances as well. Another possibility to consider is net positive charge at the starting position, which might slow down further migration by Coulomb force attraction. Recent work, however, suggests this could be negligible [8].

Takeaway Thoughts
For a fully rigorous and complete EUV resist model, in addition to the aerial (photon-only) image input, we need to have the accurate representation of low energy electron blur. These simulation runs hint that it is somewhat oversimplified to have a fixed electron blur value. It is more prudent to consider a range of blur values. This is better for giving the process variation (PV) bands.