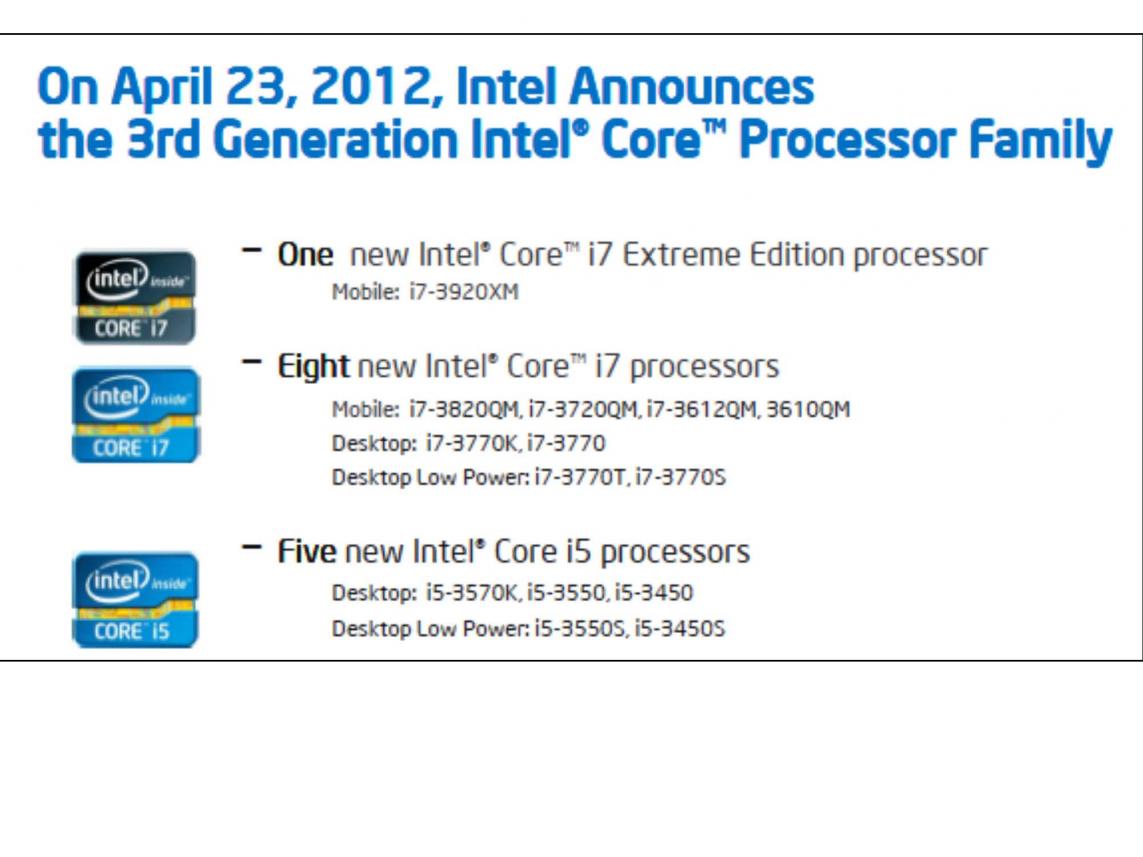 In every Intel product announcement and PR event, there are hours of behind the scenes meetings to discuss what they should introduce, what are the messages and what are the effects on the marketplace to maximize the impact of the moment. The Ivy Bridge product release speaks volumes of what they want to accomplish over the coming year. If I could summarize, they are primarily, as I mentioned in a recent blog, in a mopping up operation with respect to nVidia and AMD, however with a different twist. And second, Intel is ramping 22nm at a very rapid pace, which means Ivy Bridge ultrabooks and cheap 32nm Medfields are on their way.

When Ivy Bridge was launched, I expected a heavy dose of mobile i5 and i7 processors and a couple ULV parts as well. We didn’t get that. What we got instead was a broad offering of i5 and i7 Desktop processors and high end i7 mobile parts with high TDP (Thermal Design Point) geared towards 7lb notebooks. I believe Intel shifted their mix in the last couple months in order to take advantage of the shortfall of 28nm graphics chips that were expected to be available from nVidia and AMD. When the enemy is having troubles, then it is time to run right over them. You see, Intel believes that they may be able to prove to the world, especially corporate customers that external graphics is unnecessary for anyone except teenage gamers and why wait for the parts from nVidia and AMD.

In a couple weeks, Intel will have their annual Analyst Meeting. I expect that they will highlight Ivy Bridge and the future Haswell architecture in terms of overall performance, low power and especially graphics capabilities. The overriding theme is that Intel has found a way to beat AMD and nVidia with a combination of leading edge process and a superior architecture. Rumors are that Haswell will include a new graphics memory architecture in order to improve performance. I am not a graphics expert, but I do know improved memory systems are always a performance kicker.

But back to the short term, which is what I find so interesting. Product cycles are short and Intel knows that shipping a bunch of Ivy Bridge PCs into the market without external graphics for the next 3-6 months can put a dent in nVidia and AMDs revenue and earnings, which will hurt their ability to compete long term. I expect both to recover somewhat by Fall, but by then Intel will shift its focus to ultrabooks and mobiles making a stronger argument that the Ivy Bridge graphics is sufficient and the best solution for maximizing battery life in mobiles. At that point they should start to cannibalize from the mobile side of AMD and nVidia’s business. Both companies could be looking at reduced revenues for the remainder of the year.

Bottom line to these tactical strategies is that Intel seeks to generate additional revenue off the backs of AMD and nVidia. In the near term it should come from the desktop side and then later in the Summer and Fall from the Mobile side. There is $10B of combined nVidia and AMD revenue for Intel to gold mine, which is much more than what they could accrue by pushing their Smartphone strategy ahead of their PC mopping up operation. A weakened AMD and nVidia will have a hard time fighting off the next stage, which is the Haswell launch in 1H 2013 and the coming 22nm Atom processors for smartphones and tablets.

FULL DISCLOSURE: I am long AAPL, INTC, ALTR and QCOM

One Reply to “Intel’s Ivy Bridge Mopping Up Campaign”