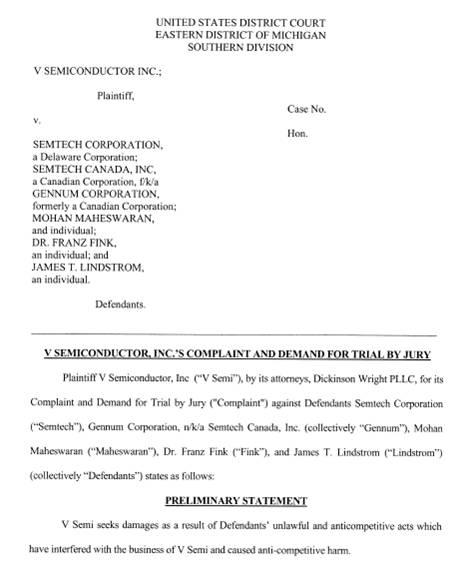 Last week, at the same time I was writing a blog about PHY IP market, claiming that this market was shaken, several events happened – not on the pure business side, but on the legal side. This means that I will have to carefully check before using each word of this blog!

If you remember, the blog conclusion was focusing on V Semiconductor, a start-up created in 2008, founded by former Snowbush’ employees, who decided to leave the company short after acquisition by Gennum. In the meantime, V Semi has launched a revolutionary SerDes, revolutionary because it is based on a digital PLL and not on oscillator PLL or even on LC tank PLL, and the technology has been implemented on Intel 28nm technology to support multi-standard protocol PHY, to be used by FPGA start-up, and probably acquired by customers developing 10G Ethernet PHY. This technology looks so attractive that V Semi was about to be acquired; by which company? Considering the on-going legal battle, I am sure you will forgive me to stay quiet about this… and call it “Company A”. But, if you want to know more about the, now previously, expected buyer, you can go on Law360 website, and try to figure out which company it could be. So we are now at late 2011, V Semi founders are finalizing the discussions with “Company A”, a letter of intent is written for an acquisition to be closed on February the 14[SUP]th[/SUP] of 2012. At the same time, Semtech, a fabless company, is also finalizing the discussion with Gennum, in order to acquire the company…

So far, these were usual moves happening in the Semiconductor and design IP industry, merger and acquisition (M&A) are pretty frequent on this fast moving market. The surprise comes when Gennum decides to sue V Semi, filling a Canadian lawsuit on February 3, 2012, against V Semi. As we did not have a chance to read this lawsuit, we prefer not to comment it! But the immediate result is that the company being engaged in the process of buying V Semi has decided to pull its offer.

It seems that the legal battle field can also be an extension of the more classical competition, where companies are fighting for market share by using marketing and sales forces. Can we say that this Semtech vs V Semi case is such an example? It’s probably too early to know the reality behind this legal battle. Nevertheless, V Semi management has reacted like if the initial (legal) attack from Semtech was just a way to keep away the industry of using V Semi revolutionary SerDes, as they have, on April 26 filled a $150 million lawsuitagainst Semtech, the former Gennum CEO, as well as a person who was in charge of due diligence about V Semi, when working for another company (Company B in V Semi case) when this “Company B” was thinking about buying V Semi technology!

I remember when I was far younger, watching “Dallas” serial at TV. Looking at what is happening today in the SC and IP industry make you feel that Dallas is a fairy tale for five years old kids, when comparing!

That’s all for today…but I will stay tuned, as I guess that this is not the end of the PHY IP real saga!