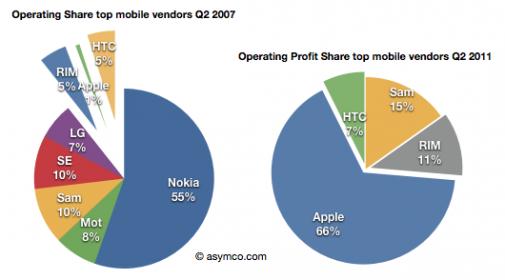 This is an amazing picture (click to enlarge). Apple now makes 2/3 of all the profit in the entire mobile handset industry. And that is the entire handset industry, not just smartphones where it has also blown past Nokia to become number one (although there are more Android handsets than iOS, those handsets are spread across multiple manufacturers and the manufacturers make a lot less profit per handset).

In 2007 Nokia made over half the profit. They also made about 1/3 of all the phones manufactured, around one million phones per day. Now they aren’t even on the chart (you need to be profitable to have a fraction of the total profits). Samsung and HTC make another quarter of the profit, with RIM bringing up the rear.

Another interesting statistic: so far this year Microsoft made less than 1% of its revenues from mobile. So those people who point out that it makes more from patent licenses to Android manufacturers are right. Of course it is hoping for a big increase when Nokia finally ships WP7 phones, but my own opinion is that Nokia is doomed by a mixture of Chinese competition at the low end and Apple/Android at the smartphone end. But I could be wrong: carriers are very political and don’t want to be held hostage to Apple or Google. How Microsoft has weakened that now carriers may want to embrace them since they are a “safe” partner who can be rolled over if necessary.


Note: You must be logged in to read/write comments. When registering for SemiWiki put “iPad2” in the referral section and you may win one!