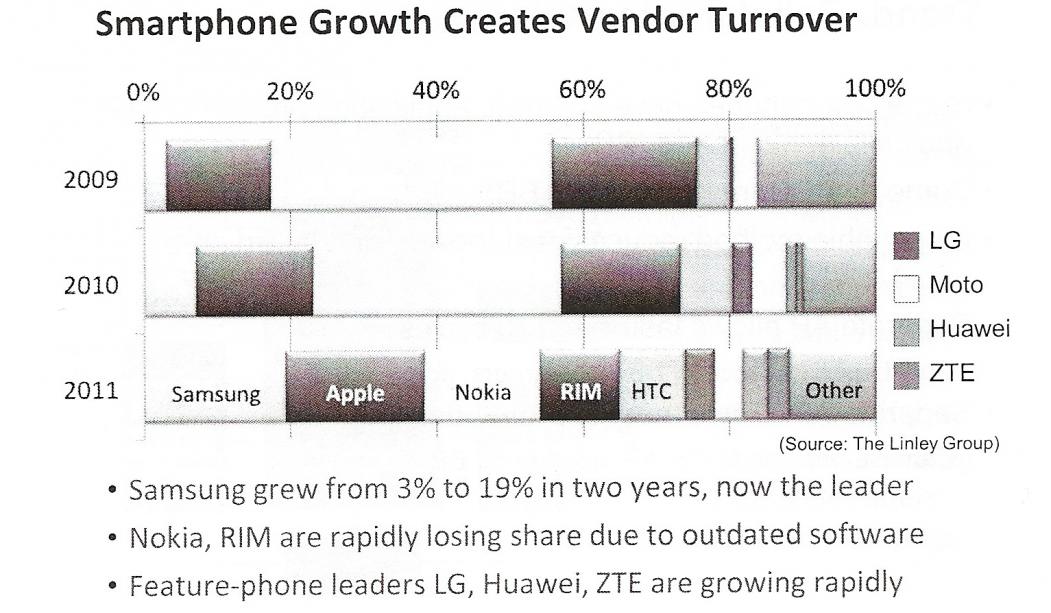 I went to part of the Linley Tech Mobile Conference. This is the current incarnation of what started life as Michael Slater’s Microprocessor Report, and the twice-yearly Microprocessor Forum. These very technical analysis organizations seem to work well when they are a small group of analysts working together to cover an area of technology, but they don’t seem to scale very well once they are bought by the bigger companies with their high overhead of vice-presidents and sales teams. Microprocessor Report had its own history moving into Ziff-Davis, then Cahners/Reed and In-Stat and now back to its roots in the Linley Group. And as if to emphasize my point, a week ago NPD group apparently shut down In-Stat completely and laid off 30 analysts.

We all know the background to mobile microprocessors: smartphones and tablets are growing like crazy. Smartphones currently have 25% CAGR expected from 2011-15, an tablets even faster, at 54% CAGR although from a much smaller base (which means they triple over the period). By the 2015 smartphone growth should start to be leveling off in the classic S-curve. Everyone seems to be predicting that tablets won’t replace smartphones (I agree) nor PCs (I’m not so sure, I use mine more and more).

The rise of the smartphone has created a huge change in vendors: Samsung and Apple have pretty much taken all the money. Nokia has shrunk from #1, RIM is in trouble. Up and comers are Huawei, ZTE and LG.

Also Motorola which is about to be part of Google. My expectation is that Google will sell Motorola as soon as they can. They really bought it for the patents (to defend their Android licensees against Apple and others) and Wall Street will hate it if Google keeps it. They hate businesses that mix very different margins such as hardware and software. When I was running Compass and we were trying to sell the company, Bala Iyer, the CFO of VLSI, told me, “Wall Street will give me credit just for shutting you down; if we get any money for you, it’s icing on the cake.” I’m sure they are telling Google the same thing. But how much Motorola is worth without the patents is unclear (of course it would have a patent license to everything, but not the rights to sublicense). After all, it is not in any sense the market leader in smartphones or even Android phones. So I’m not sure who would buy them. Chinese companies are the ones rumored to be interested but I don’t quite see why, say, Huawei would want it.

In terms of semiconductor suppliers, it is the story of the rise of Qualcomm and Samsung and the decline of TI (who have exited the baseband business). A smartphone involves two primary sub-systems, the application processor and the baseband chip (which runs the radio interfaces). There has been a trend towards integrating these on the same chip but that trend has been interrupted since neither Samsung nor Apple do it, and they are such a large part of the market. Apple, for example, builds its own application processors (A4, A5) and uses Qualcomm for baseband. But the trend towards integation, plus Apple and Samsung rolling their own means there is only perhaps 20% of the market available to sell a merchant baseband processor. One big advantage of keeping the two subsystems in separate chips is that the whole radio interface (which doesn’t change so fast) doesn’t need to be requalified each time a new version of the application processor is created. 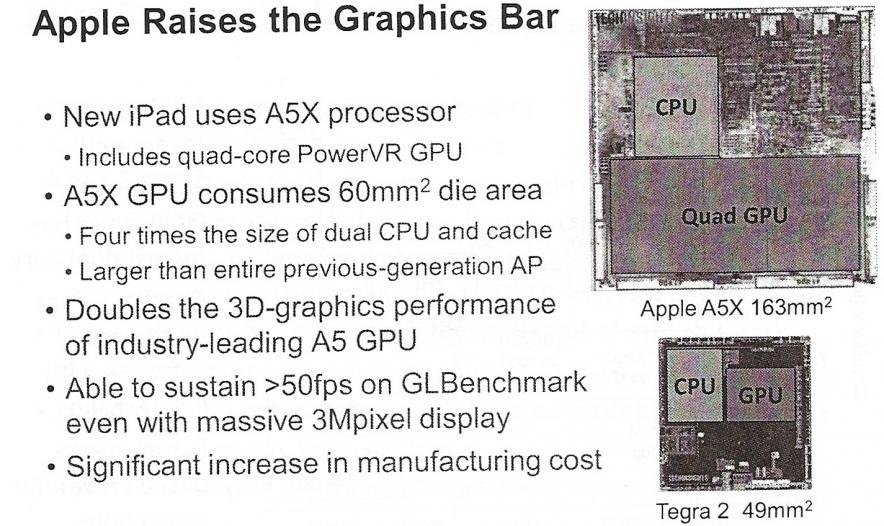 Apple’s new iPad uses the A5X application processor. This is a huge chip using a quad-core Power-VR GPU. The GPU alone is 60mm[SUP]2[/SUP] of die area which is larger than the whole of Nvidia’s Tegra2. But it has to do more than HD and can maintain a frame rate of 50fps on the iPad’s 3 megapixel display. And Apple has enough margin on the new iPad to bury the cost.

Intel and MIPS are trying to challenge ARM’s dominance of the application processor. In principle Android allows alternative architectures painlessly since Apps are distributed as Java bytecodes (which is architecture neutral). In practice, many Android Apps, especially games, incorporate native ARM code making things rather more painful. The solutions are not attractive:

That day, EETimes reported rumors that MIPS had engaged Goldman to help them find a buyer for the company. At the small exhibition that evening the MIPS employees manning their table looked a bit glum. “want to license a microprocessor? Or how about buying…like…the whole company?”