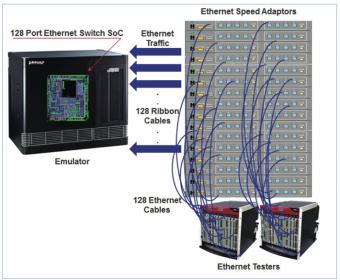 To fans of Godel, Escher and Bach (the Eternal Golden Braid), there is an appealing self-referential elegance to the idea of verifying a network switch in a cloud-like resource somewhere on the corporate network. That

elegance quickly evaporates however when you consider the practical realities of verifying such device in ICE emulation mode.

Network switches and routers today have 256 ports or more. To fully verify a pre-silicon model requires realistic traffic on each of these ports, which in turn requires an Ethernet tester and a speed adapter per port (to adjust real traffic speed to the lower speed of the emulator) and a lot of cables to connect it all. There are plenty of challenges in managing and debugging this custom-patched hardware (for example, dealing with non-determinism in the speed bridges), and even when it’s working you have expensive hardware tied up in testing just one design. So much for the cloud – this is more of a puddle, firmly rooted to the ground. 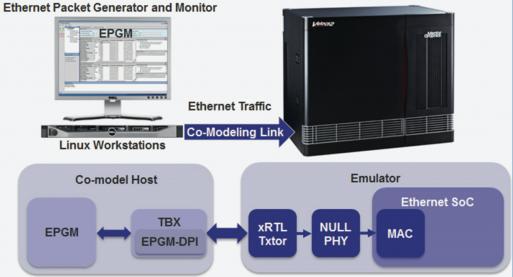 hich could support sharing emulation as something much more like a cloud resource without the need for dedicated hardware interfaces. In VirtuaLAB, Ethernet testers are modeled in software, based on proven IP running on Linux workstations. There’s no need for speed bridges or cables since software models have no problem speed-matching the emulator.

All of which makes it possible to share emulation as a cloud-like resource. Mentor has been at this for a while; back in 2013, Juniper Networks presented use of this solution to verify a large switch in which they were able to model billions of transactions at ~3.6K frames/second across all ports. More recently, Cavium presented use of VirtuaLAB to drive 11M transactions per day. This is the kind of throughput you need in order to fully verify the 40G/100G, 256+ port switches that are being built today. Since Mentor has been able to show the ability to bring up a system in as little as 8 days, the appeal of moving from a nest of wires and boxes to a very streamlined verification approach has been compelling.

It is difficult to overstate the importance of this direction. Emulation has been around for a while, as a very necessary but expensive way to verify one design at a time. And setting up a representative test environment around those systems has been almost as complex as verifying the systems themselves. Now it becomes reasonable to think of emulation with all the benefits of just another abstracted cloud resource. The facility can be accessed from anywhere in the corporate network, utilization can be maximized since it can be used to verify more than one design at a time, capacity can be scaled up more transparently as design complexity and demand grows and maintaining the hardware and software becomes largely an IT problem (Mentor provides software management using the Enterprise Server’s IT included as a part of the Veloce emulation platform). Businesses will see immediate value in this approach and will want to see more of their fixed compute costs moving in this direction.