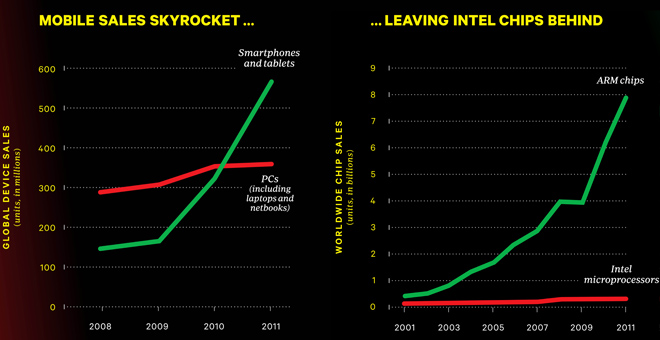 Interesting to note; our cell phones today have more computing power than NASA had for the first landing on the moon. The insides of these mobile devices that we can’t live without are not like personal computers or even laptops with a traditional CPU (central processing unit) and a dozen other support chips. The brain, heart, and soul of today’s cell phone is a single chip called an SoC or System on Chip, which is a literal definition.

I worked my way through college as a field engineer for Data General mini computers. CPUs were dozens of chips on multiple printed circuit boards, memory was on multiple boards, I/O was a board or two. Repairing computers back then was a game of board swap based on which little red lights blinked or stopped blinking on the front panel. My first personal computer was a bit more compact. It had a mother board with multiple chips and slots to plug in other boards for video, disk, modem, and other interfaces to the outside world. Those boards are now chips on a single mother board which is what you will see inside your laptop.

Today, this entire system is on one chip. Per Wikipedia:

A system on a chip or system on chip (SoC or SOC) is an integrated circuit (IC) that integrates all components of a computer or other electronic system into a single chip. It may contain digital, analog, mixed-signal, and often radio-frequency functions—all on a single chip substrate.

Let’s look at the first iPhone tear down which can be found HERE. The original iPhone was released June 29, 2007 and featured:

Compare this to the current iPhone4s tear down which can be found HERE. The iPhone 4s was released October 4, 2011 and features:

There is a nice series of Smart Mobile articles on SemiWiki which cover the current SoCs driving our phones and tablets:

It will be interesting to see what the iPhone5 brings us but you can bet it will be an even higher level of SoC integration; a quad core processor, a 2048×1536 display, and a 12M pixel camera, yet in a slimmer package.

The technological benefits of SOCs are self-evident: everything required to run a mobile device is on a single chip that can be manufactured at high volumes for a few dollars each. The industry implications of SoCs are also self-evident: as more functions are consolidated into one SoC semiconductor companies will also be consolidated.

0 Replies to “A Brief History of SoCs”