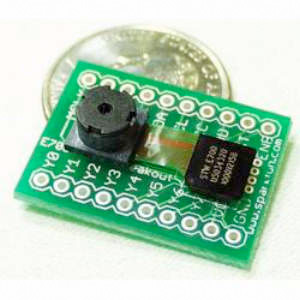 Your cell-phone contains a camera. In fact, it probably contains two: one forward facing for video-calls and one rear-facing for taking photographs and videos. The rear-facing one typically has much higher pixel count than the front-facing. The capabilities of cell-phone cameras are getting “good enough” that the point-and-shoot digital camera market is already in decline. In fact Nokia have recently announced a phone with a 41 megapixel camera, which is about 3 times the count on my point-and-shoot Canon. Lens size counts for something. A lot actually. My old 2001 era 2 megapixel Canon PowerShot G3 takes better pictures by far than my cell-phone despite having a lot lower pixel count, due to having a serious sized lens. 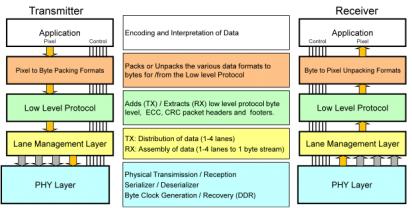 Since the companies that make the cameras and the companies that make the application processors (AP) are usually different, there is a need for standardization of the camera/AP interface. And the MIPI Alliance has been on top of this for several years. The main connection is a fast serial interface known as CSI (nothing to do with crime-scenes, this stands for camera-serial-interface). This consists of a D-PHY (well, two, one at each end) and a CSI-2 transmitter at the camera and receiver on the AP. The D-PHY provides the physical interface and the transmitter and receiver cover encoding, packing, error handling, lane distribution, assembly of image data stream and so on.

However the increasing size (pixel count) and frame-rate is driving the need for even higher bandwidth, hence CSI-3. Conceptually CSI-3 and CSI-2 are similar, both providing a high-speed link between camera and AP. But under the hood they are very different. CSI-3 has a new M-PHY (the successor to D-PHY) and there can be more than one on each side. Each M-PHY has a bandwidth of up to 6Gb/s per lane, with up to 4 lanes.

The next level up is the Unified Protocol layer (UniPro). This defines a unified protocol for connecting devices and components (not necessarily cameras). It is designed to have high speed, low power, low pin count, small silicon area, high reliability and so on.

Above that is the Camera Abstraction Layer (CAL) which does get specific to camera, images and video. In addition to defining how the images are transported, there is also a camera command set (CCS) extension which provides standardized mechanisms for controlling the camera sub-system.

Of course you can take the CSI-3 and M-PHY-standards and implement them yourself (I would link to them but you have to be a MIPI member to access them), just as with any other standard interface. However, when good IP is available it makes more sense to buy rather than make.

Arasan have a complete portfolio, including D-PHY and M-PHY, digital control IP (CSI-2, CSI-3, DSI etc)providing the smallest power and area footprints and the highest quality. These are customer-provoen and thus the low-risk path for fast time-to-market designs (which would be…well, all designs).

Andy Haines of Arasan will also be presenting at the Flash Memory Summit next week, although not on cameras, on Mobile Storage Designs for Compliance and Interoperability. FMS is at the Santa Clara Convention Center on Tuesday-Thursday 13-15th. Details here. And if you want to talk CSI-3 or anything else Arasan at the summit, they will be exhibiting at booth 610 and also be on the UFSA standards organization booth, which is 800.

0 Replies to “How To Connect Your Cell-phone Camera”