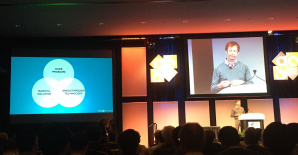 Today’s DAC keynote was by Brian Otis of Google about their project, working with Novartis, to build disposable contact lenses that perform continuous glucose monitoring.

Why is this important? There are 382M people around the world with diabetes who typically have to check their blood glucose levels four times a day. This involves pricking the skin and then using a monitor to analyze a drop of blood. There are also continuous glucose monitors (CGM) which also require a needle under the skin connected to a monitoring device. Neither approach is all that pleasant.

In addition to type I diabetics (born with it) and severe type II diabetics (happened later in life) there is a huge number of pre-diabetic and obese people who could benefit from continuous monitoring but do not get it. The cost per year to track a person is about $500 but the cost to treat someone who truly has diabetes is $10,000. That’s a big difference. To scale to reach all the people who would benefit requires bringing glucose monitoring to over 100M people.

The big challenge is to shrink the size to fit in a soft contact lens and monitor glucose levels in tears rather than blood. This is itself a challenge since tears are only around 6uL in a thin film <10nm. It is also a low concentration at only 2% the concentration of blood glucose. 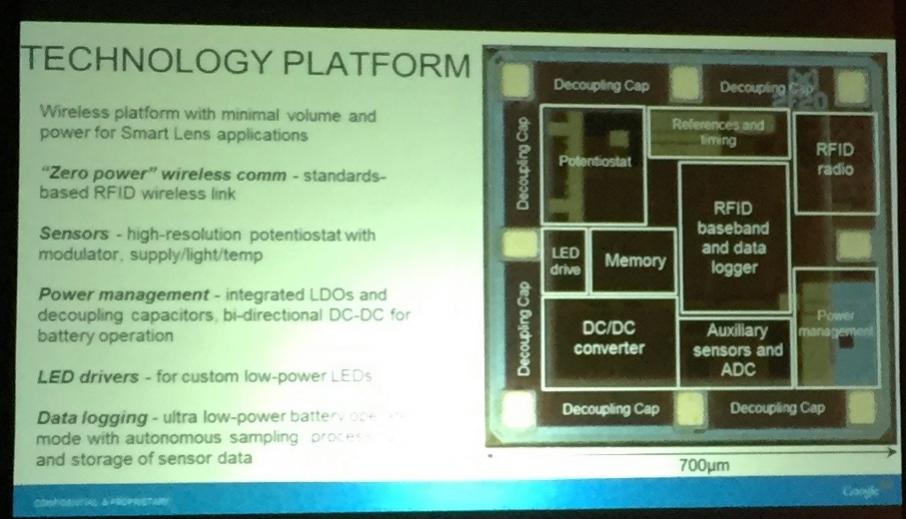 The contact lens contains a chip. It is just 0.04mm[SUP]2[/SUP]or 700um on a side, and aggressively thinned. It has integrated power management, encrypted bi-directional wireless links, on-chip memory, a flexible sensor interface. The wireless links are not active, they work in a similar way to RFID chips relying not on powered transmitters but back-scatter. This also means they don’t need provision for accurate frequency references since there is no way to include crystals, or surface-mount components like inductors or capacitors, or even routing.

The sensor itself is a similar size to the chip at 1mm on a side. It uses a glucose oxidase enzype to convert glucose to hydrogen peroxide which the electrodes can then sense and so continuously monitor. 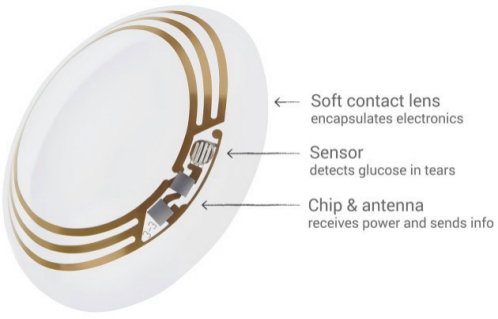 Put it all together and almost all the lens is actually 97% lens stuff and just 3% monitoring stuff. Disposable lenses cost about $1 each and last for 24 hours and so another challenge is to get the cost of the electronics down so that a lens with a sensor is in the same type of price range. At least, presumably, you don’t need two since only one eye should need monitoring.

Blood glucose, and insulin, are heavily involved in weight increase, decrease and stabilization so there is another potentially big market. In a study using pin pricks there were very positive results doing the monitoring but a huge dropout rate. People were simply not prepared to take blood samples several times a day for something that is not life threatening, at least in the short term.

The communication with the user works through a smartphone using NFC (like ApplePay) or RFID (although current smartphones cannot read this). Also there can potentially be a tiny LED in the lens too for immediate communication of urgent out of band readings (glucose too high or too low).

7 Replies to “Google Smart Lens: IC Design and Beyond”