If you’re headed to #53DAC (June 5-9 in Austin,TX) and are interested in learning more about FD-SOI, there will be lots of opportunities. Here’s a quick guide to get you started. … Read More 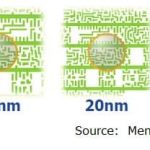 It is truly amazing to consider the advances in microelectronic process development, using 193i photolithography. The figure below is a stark reminder of the difference between the illuminating wavelength and the final imaged geometries. This technology evolution has been enabled by continued investment in mask data generation… Read More

Earlier this week at DAC, Javier DeLaCruz of eSilicon presented at the Samsung booth. They presented an introduction to what eSilicon does. However, since what they do has changed over the years it is useful to recap. If you know about eSilicon then you probably think of them as a fabless ASIC company. The old ASIC model back in the … Read More

The Samsung Smart, Connected Lifestyle event was last night at the Bently Reserve in San Francisco. Getting into San Francisco was no picnic with all of the roadwork and new building construction. We even saw people drive up on the sidewalk to get around car clogs. It really was crazy but definitely worth it after seeing the first … Read More

Fortunately Paul McLellan and I missed IDF. Paul was atop Mt. Kilimanjaro and I was in Taiwan signing books. After reviewing the materials and watching the videos we really didn’t miss much in regards to mobile so no regrets. The Apple event would have been fun even though I won’t be buying an iPhone6 or an iWatch and I will tell you why.… Read More

Rather than watch the World Cup battle for third place, my beautiful wife and I spent last Saturday afternoon at the CASPA Wearables Symposium. The most interesting presentation was from Samsung because it included slides on their foundry offering. In regards to wearables, I still don’t see the ROI I need to buy one, yet. We are getting… Read More

Samsung has plenty to talk about this year at DAC. The FD-SOI partnership with STMicroelectronics for example. Also the Samsung GLOBALFOUNDRIES 14nm partnership. Thus the “Paradigm Shift in the Foundry Supply Chain” theme. Samsung is also leading the pack with giveaways!