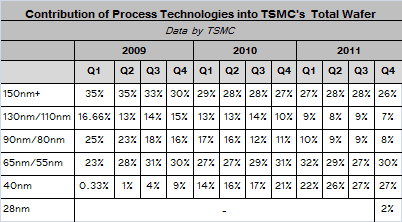 As I write this I sit heavyhearted in the EVA executive lounge returning from my 69[SUP]th[/SUP] trip to Taiwan. I go every month or so, you do the math. This trip was very disappointing as I can now confirm that just about everything you have read about TSMC 28nm yield is absolutely MANURE!

Please let me apologize to the hard working people of TSMC and the leading edge fabless semiconductor engineers that are bringing 28nm silicon to our hands and homes this year. On behalf of all of the people around the world who Blog and Tweet ignorant things, they know not what they type, I’m very very sorry.

Side bar: Even though you are not the origin of misinformation, Re-Tweeting is a legally actionable offense, especially if you are a self-proclaimed expert in the field. Don’t believe me? Check the “New Media” defamation case law that is now jamming the judicial systems around the world!

The problem with riding the TSMC 28nm yield defamation train is that at some point in time you will run out of track (you will be proven wrong), and that time is coming right around the bend, believe it.

First, let’s look at the ramping history of the TSMC processes. This is public data made available to investors (TSMC is a publicly traded company, TSM – NYSE) so all SEC rules apply here. For reference, this is the first four quarters of production silicon based on percentage of wafer revenue: